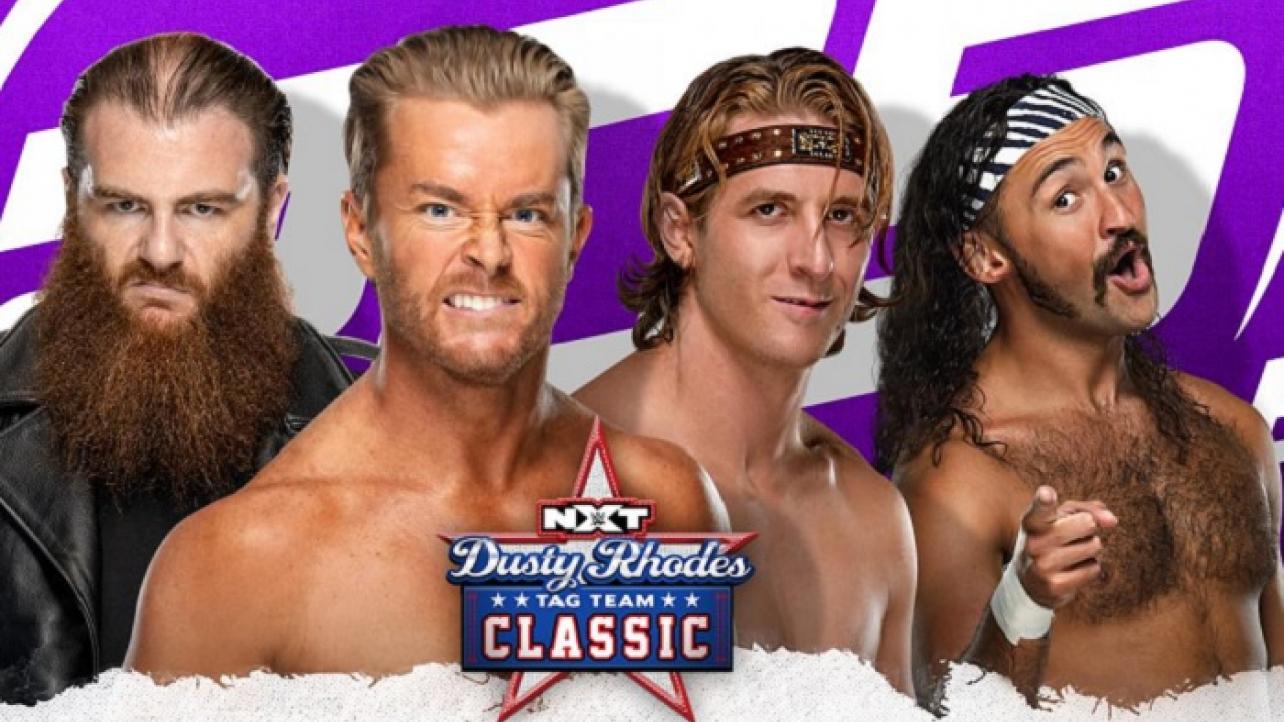 It’s once again time for “The Most Exciting Hour on Television,” as WWE 205 Live returns this evening following this week’s edition of WWE Friday Night SmackDown on FOX.

The purple brand program with the hottest action from WWE’s cruiserweight division will feature a pair of first round matches in the 2021 NXT Dusty Rhodes Tag-Team Classic Tournament.

Scheduled for first round matches in the Dusty Classic on WWE 205 Live this evening are Killian Dain & Drake Maverick vs. Curt Stallion & August Grey, as well as Joaquin Wilde & Raul Mendoza of Legado del Fantasma taking on The Bollywood Boyz.

This week’s episode of WWE 205 Live kicks off with a special opening video package that features a look at the action thus far in the 2021 NXT Dusty Rhodes Tag-Team Classic Tournament, culminating with promotional packages on the two tourney bouts scheduled for tonight’s purple brand program.

After the elaborate, in-depth opening video package wraps up, we shoot inside the Capitol Wrestling Center in Orlando, Florida where we see the special graphics for the NXT Dusty Rhodes Tag-Team Classic Tournament.

From there, the camera pans around the CWC, stopping at the commentary table where Vic Joseph and Nigel McGuinness welcome us to tonight’s show, and then immediately run down the brackets for the tourney.

Now we focus on the entrance area, as the theme song for Legado Del Fantasma plays. Out comes the NXT Cruiserweight Champion, Santos Escobar, as he leads his men — Joaquin Wilde and Raul Mendoza — down to the ring for this week’s opening contest in first round tournament action here on 205 Live.

As Legado Del Fantasma and Santos Escobar settle into the squared circle, the familiar sounds of The Bollywood Boyz’ theme song begins playing and out comes the fun-loving, energetic Samir and Sunil Singh. They stop, as always, at the commentary table, where also as always — McGuinness is overly jovial and playful, dancing around with The Bollywood Boyz, while Joseph refuses to — as usual. He does, however, promise them that he will dance with them if they go on to win the NXT Dusty Rhodes Tag-Team Classic Tournament this year.

On that note, the Singh Bros head into the ring and the bell sounds. Sunil Singh and Raul Mendoza kick things off for their respective teams. Mendoza jumps off to an early offensive lead, however it doesn’t last long, as Singh takes him down to the mat.

Samir shifts the momentum into his favor, as he works over Mendoza on the mat. Mendoza eventually works his way free, however Singh turns up the heat, hitting an arm-drag on Mendoza and locking up a straight ambar on the mat to control the action. They work back up and Mendoza manages to make it to his corner, where he tags in Joaquin Wilde.

Singh welcomes Wilde into the ring and immediately gains the upper-hand on him as well. He leans over and tags in Sunil. Sunil hits Wilde a few times and then holds him as he tags in Samir and the two hit a double-team spot. Samir tags back in, however after being distracted for just a brief moment, Wilde takes over after hitting a nice DDT on Singh. He tags in Mendoza.

Mendoza builds up a head of steam and takes out Singh and then quickly tags Wilde back in. Mendoza and Wilde hit a nice double-team suplex on Samir. He goes for the cover, but Samir stays alive. Now the action spills out to the floor, with Mendoza taking it to Samir outside the ring before taking him back inside the squared circle, where he grounds his opponent and locks a chin-lock on him.

Moments later, Mendoza sprints at Singh in the corner, but Singh side-steps him at the last second and Mendoza goes flying through the ropes, crashing into the steel ring post before sailing out to the floor. This allows Singh to make the tag and now Sunil is the legal man. He immediately takes the hot tag and starts dominating any-and-everything that moves. He heads out to the floor to add some punishment to the other member of Legado Del Fantasma as well.

Back in the ring, Sunil hits a nice double axe handle off the top-rope for a near fall. Now he tags Samir back in. Samir continues to take it to the Legado Del Fantasma member, peppering him with punches in the corner and then sitting him on the top-rope. Mendoza starts throwing fists in attempt to fight his way free. Wilde comes over, however Samir pulls him down and tags himself in. Sunil brings Mendoza down the hard way and then from the opposing top turnbuckle, Samir follows up with a big high-spot for a near fall.

Now all hell starts to break loose, with bodies flying everywhere. Singh is thrown to the floor and now Legado Del Fantasma hit a couple of double-team spots which sets up the pinfall victory. With the win, Joaquin Wilde and Raul Mendoza advance to round two in the ongoing NXT Dusty Rhodes Tag-Team Classic Tournament.

After the opening bout wraps up, Legado Del Fantasma walk over with Santos Escobar and pose with the NXT Dusty Rhodes Tag-Team Classic Tournament trophy that they believe will inevitably be theirs, and then we head backstage.

In one of the locker rooms, we see Drake Maverick and Killian Dain lacing their boots up, as they prepare for this week’s 205 Live main event.

We head back inside the CWC where the team of August Grey and Curt Stallion are introduced, and they begin making their way down to the ring. Grey has polka dots on some of his gear as an apparent tribute to Dusty Rhodes, the namesake behind the tournament.

Now the opponents for Stallion and Grey’s music hits and out comes the duo of Drake Maverick and Killian Dain together. Maverick dances around and once in the ring, hops on Dain’s back. Dain shucks him off and asks him what the hell he’s doing. The bell sounds and we’re off-and-running with this week’s main event.

It will be Stallion and Maverick starting things off for their respective teams. We see Stallion jump off to an early offensive lead, however it isn’t long before the big man gets physically involved and the match swings into the favor of Maverick and Dain. Maverick keeps hopping around like Shawn Michaels.

Grey finally tags in and he tells Maverick he wants a piece of the big man. Maverick obliges him, tagging Dain into the bout. Grey and Dain lock up and Dain sends Grey flying across the ring. They lock up again and Grey hits the ropes, but then walks right into a shoulder-tackle from the big man. He hits the ropes again and tries a cross-body, however he simply bounced off Dain and crashed down to the mat by himself.

Dain tags Maverick back in and the two hit some double-team offense, which concludes with Dain slamming Maverick onto Grey. Maverick gets in a couple of shots and then isolates the arm of Grey before tagging Dain back in. Again Dain picks up his own partner, Maverick, and uses him as a weapon as he slams him into Stallion and Grey both.

Now we see Dain go to work on Grey, however seconds later, Grey buys himself some much-needed time and makes it over to his corner to tag in Stallion. Stallion and Grey go for a double-team spot on Dain but it backfires as Dain ends up sending them both sailing out to the floor outside of the ring. Now Maverick tries hyping Dain up for a big dive to the floor, however Dain calls an audible and again uses Maverick as a weapon, throwing him over the top-rope, where he sails out and crashes onto Grey and Stallion.

Back in the ring, Maverick is now the legal man again and he goes to work on a weakened Stallion. Stallion quickly turns the tables on Maverick with a shoulder-breaker. He tags in Grey. Grey hits a belly-to-back suplex on Maverick, rolling over for a pin attempt that only gets a count of two. Grey slaps a rear chin lock on Maverick. We finally build to the finishing sequence, which sees Dain hit a big power bomb on Stallion. He then follows that up by powerbombing Maverick onto Stallion. Maverick then scores the 1-2-3. With the win, Dain and Maverick advance to the next round of the NXT Dusty Classic.

The #DustyClassic means so much to @BollywoodBoyz because of their roots.

“Dusty was the son of a plumber, and you’re looking at the sons of a bus driver.” #205Live pic.twitter.com/e2A8RdY0ZJ