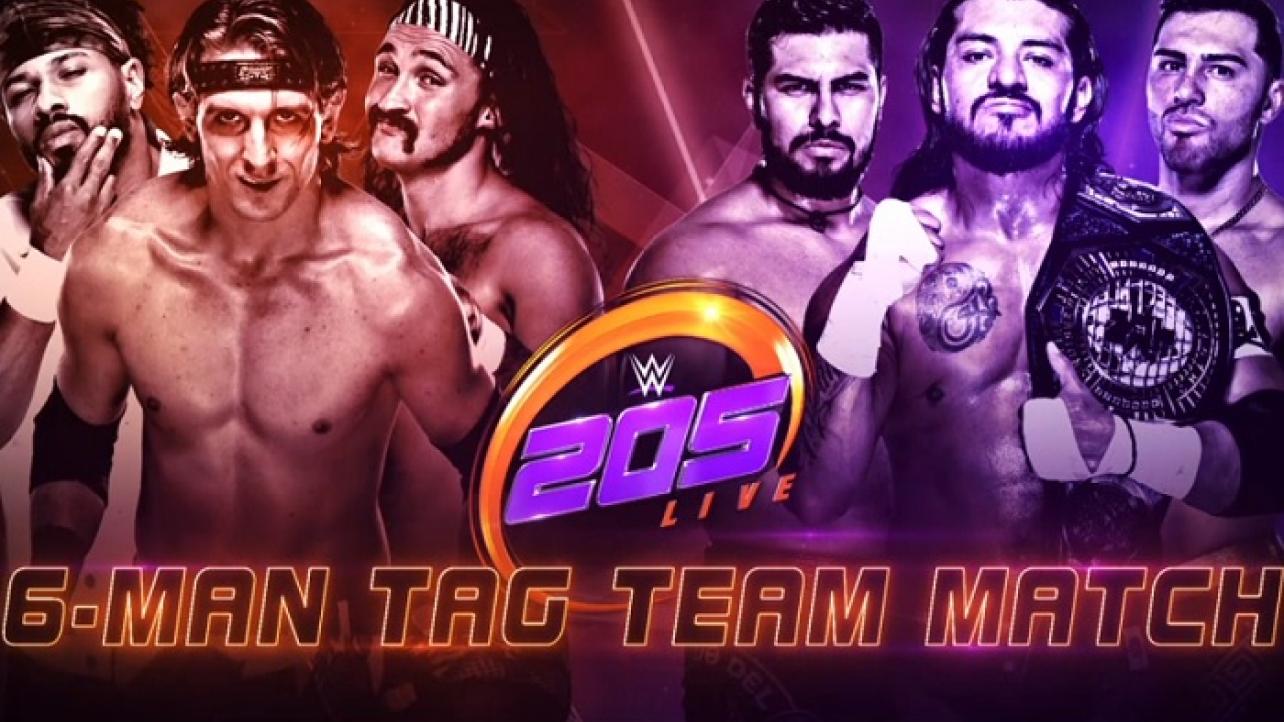 The Most Exciting Hour on Television returns this evening, as the purple brand returns via the WWE Network when WWE 205 Live premieres tonight immediately following the live WWE Friday Night SmackDown on FOX broadcast.

On tap for this week’s edition of the Cruiserweight-themed WWE program is a pair of exciting matches, as the trio of Legado Del Fantasma (NXT Cruiserweight Champion Santos Escobar, Joaquin Wilde & Raul Mendoza) take on Curt Stallion, August Grey & Ashante “Thee” Adonis in six-man tag-team action, while The Bollywood Boyz (Samir & Sunil Singh) take on the team of Ariya Daivari and Tony Nese.

This week’s edition of WWE 205 Live kicks off on the WWE Network from the new-and-improved WWE ThunderDome II inside Tropicana Field in St. Petersburg, Florida with the usual, traditional weekly signature opening video package.

From there we shoot live inside the venue in St. Petersburg, where we are welcomed by the two-man commentary team of Vic Joseph and Nigel McGuinness as the camera pans around the building.

After that, we hear the familiar theme song of “The Premier Athlete” Tony Nese, and he makes his way out accompanied by his tag-team partner for this evening, Ariya Daivari.

The two chest-bump and make their way down the entrance aisle, as they step into the squared circle for tonight’s opening contest. While they settle into the ring, we get an on-camera greeting from the aforementioned commentary duo, which McGuinness gearing up for his fun-spirited Bollywood-friendly acting chops for the forthcoming entrance of the opponents this week for Nese and Daivari.

On that note, the theme for The Bollywood Boyz hits and out comes the team of Sunil and Samir Singh, ready for tag-team action against “The Premier Athlete” and “The Persian Lion” in the first of two matches scheduled for tonight’s purple brand program.

The bell sounds and we’re off-and-running with the WWE 205 Live opener. Early on, we see some back-and-forth action and then as the match settles in a bit, we see the heel duo pull ahead in the first offensive run of the contest. Daivari goes to work on Singh, taking it to one-half of The Bollywood Boyz to set the tone here in the early goings.

Daivari dominates the action for a minute or two and then tags in Nese, who picks up where he left off, taking it to Singh. Some mistiming issues from “The Premier Athlete,” who tags back in, leads to an offensive shift in momentum for The Singh brothers. Sunil tags in and now he keeps the momentum in the Boyz’ favor, working over Nese.

Nese finally makes the tag to Nese, and he gets the control back in the favor of the heel duo. While Nese maintains one half of the Boyz’ on the floor, we see Daivari head to the top-rope. He comes flying off with his Persian Splash for the pinfall victory.

Once the first bout of the evening wraps up, we head to a quick ad break where we see some commercials for WWE Shop holiday gift cards and the upcoming WWE TLC 2020 pay-per-view next Sunday night, December 20th.

After the commercials wrap up, we head back inside the new-and-improved WWE ThunderDome set up inside Tropicana Field in St. Petersburg, Florida, where Curt Stallion’s music hits and the new number one contender to the NXT Cruiserweight Champion makes his way out.

Stallion heads down to the ring and stops, as his music fades down and then off, and on comes the entrance theme of his first of two tag-team partners for tonight’s six-man tag-team main event on WWE 205 Live — Ashante “Thee” Adonis. He stops at ringside as well and finally, August Grey’s music and he makes his way down.

All three baby face talents head into the ring and once they settle in, we hear the familiar sounds of Legado Del Fantasma’s theme music. On that note, the trio of NXT Cruiserweight Champion Santos Escobar, Joaquin Wilde and Raul Mendoza make their way down to the squared circle for tonight’s featured bout.

The bell sounds and our second of two advertised matches is officially underway. McGuinness and Joseph talk on commentary about this being a rematch of a bout from before the NXT TakeOver special, as well as the recent attack on Stallion.

Early on, we see Legado Del Fantasma on the receiving end of the majority of the punishment, until finally Raul Mendoza helps shift the offensive momentum in their favor. Ashante “Thee” Adonis tags in and goes on a nice run, but after some interference from Escobar, the trio of Legado Del Fantasma continue their run in the offensive driver’s seat.

As the heel trio pulls into a comfortable offensive lead, finally the NXT Cruiserweight Champion tags in and adds to the lead, taking it to Stallion, who has been isolated in the ring for a few minutes now. Finally, Escobar tags out and moments later, Stallion leaps and makes the tag to August Grey.

Grey takes the hot tag and comes into the ring on fire, helping shift the offensive momentum back in the favor of the babyface trio. Moments later, as Grey was running to hit the ropes, from the ring apron, Escobar pulls the top-rope down and Grey goes flying out to the floor unvoluntarily, landing awkwardly. Legado Del Fantasma capitalizes on this and now Wilde takes it to Grey.

Legado Del Fantasma are starting to utilize quick, repeated tags, which are so frequent that McGuinness and Joseph talk about it for a while on commentary. The trio continues tagging in and out, keeping fresh guys on Grey at all times add widening the gap between themselves and their foes for this evening. Mendoza tags in and hangs in the ring for a while, finally ending the multiple-tag sequence that was clearly part of the strategy of Legado Del Fantasma.

Some innovative offensive from Grey puts Wilde down and allows Grey to crawl over to his corner, making the tag to Stallion. Stallion, who has been pent up on the apron, lets his aggression out, taking it to Wilde and keeping him from making the tag. He knocks Mendoza off the apron and hits a dive through the ropes, splashing onto him on the floor. Back in the ring, Stallion hits a drop kick and then a nice follow-up for a near fall on Wilde. McGuinness brings up the fact that Escobar has a big smile on his face, despite Stallion still running away with the offensive momentum in this main event match-up.

Now we see Mendoza interfere, helping Wilde turn the tables and shift things back into Legado Del Fantasma’s favor. This doesn’t last long, however, as out of nowhere Stallion scores the pinfall and wins it for his team.

As soon as the bell sounds after the three-count, Stallion is attacked from behind by the other two members of Legado Del Fantasma. Quickly, Ashante “Thee” Adonis and August Grey come to his aide. Stallion delivers the final blow, as Legado Del Fantasma retreat from the ring, with NXT Cruiserweight Champion Santos Escobar still wearing an ear-to-ear grin despite the loss. This week’s 205 Live goes off the air with the babyface trio staring down Legado Del Fantasma from the ring, as Escobar is overheard off-mic on the camera saying, “You’ll never be champion, Stallion!”