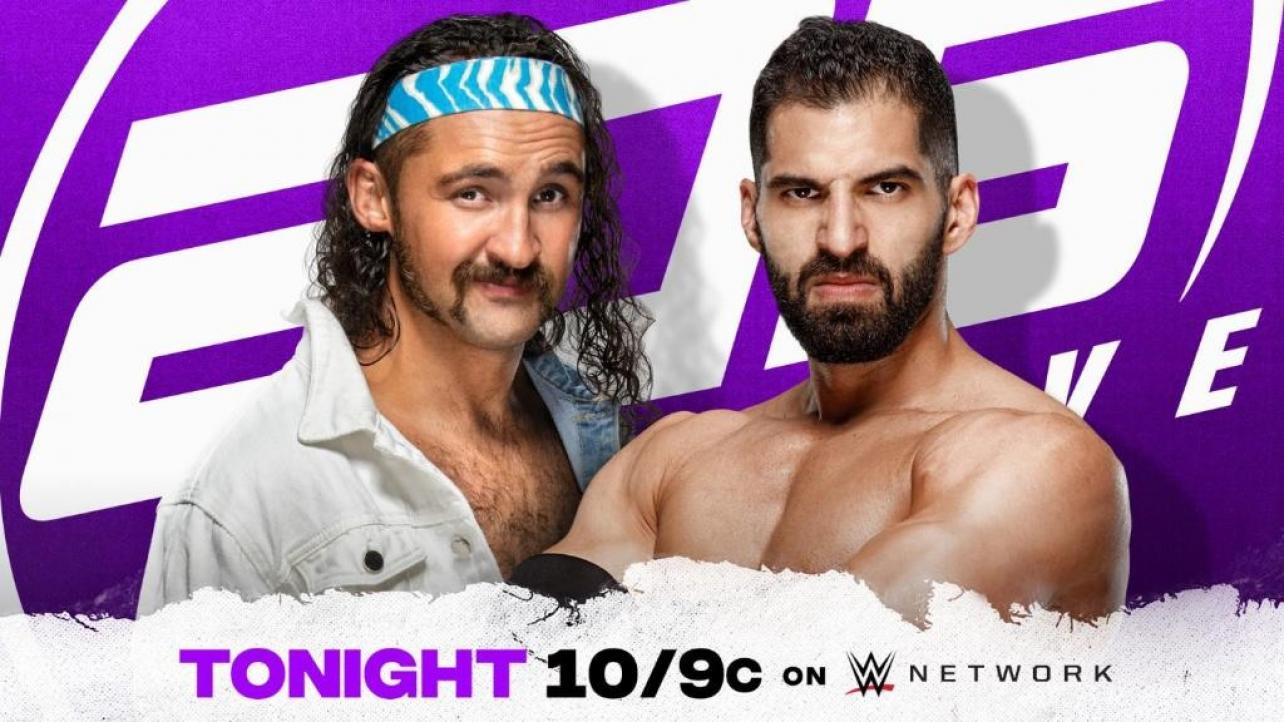 “The Most Exciting Hour on Television” has returned.

On tap for this week’s WWE 205 Live show is Curt Stallion & Mansoor vs. The Bollywood Boyz in tag-team action, as well as August Grey vs. Ariya Daivari in a featured one-on-one contest.

The regular traditional weekly opening signature package kicks off this week’s show and then we shoot inside the Capitol Wrestling Center in Orlando, FL. where Vic Joseph and Nigel McGuinness welcome us to this week’s purple brand program.

From there, we hear the familiar sounds of the entrance theme song of The Bollywood Boyz as they make their enthusiastic entrance to the ring for this week’s opening contest.

Samir and Sunil Singh stop by the commentary table as always, where the other half of their recent make-shift foursome known as Bolly-Rise — the Ever-Rise duo of Matt Martel and Chase Parker — are taking their seats for special guest commentary of the first match of the evening.

As The Bollywood Boyz interact briefly with Ever-Rise, they take their seats and the Singh Bros enter the ring where their music fades down and cuts off. Next out are their opponents, the team of Mansoor and Curt Stallion.

Our first of two advertised matches on this week’s 205 Live Cruiserweight-themed show is now officially off-and-running, as Mansoor and Singh kick things off for their respective teams. Mansoor takes Singh down and isolates his arm, focusing on the limb here in the early goings as Joseph and McGuinness talk to Ever-Rise on commentary about their recent interaction with The Bollywood Boyz.

It isn’t long before The Bollywood Boyz take over control of the action in the ring. The focus on commentary remains on Ever-Rise, as Martel and Parker get frustrated with Vic Joseph, accusing him of stirring the pot over their relationship with the other half of their Ever-Rise foursome. Singh makes the tag and we see a high-risk double-team spot that pays off as Singh holds onto Mansoor as the other Bollywood Boy flies off the top with a big splash.

That leads to a close near fall. Moments later, we see a little bit of miscommunication between the Singh Bros, which Mansoor capitalizes on by shoving one into the other, knocking the legal man off the top-rope and crotching him on the top. For the second time in the bout, where Mansoor has the opportunity to make a seemingly sorely needed tag to a fresher Stallion on the ring apron in his corner, he uses his free time to recover and fire back up so he can take over control of the action himself.

The commentators focus on Mansoor being stubborn throughout the match and refusing to tag. Finally as Mansoor leapfrogs over the top-rope from the ring apron for a neck-break finisher spot on Singh, we see Stallion tag himself in. Stallion hits a big move and then makes the cover seconds later, essentially stealing the pin from Mansoor.

Jordan Devlin Back Next Week To Determine Real Cruiserweight Champion

After a quick commercial break, which includes ads for WrestleMania 37, we return to the CWC where the commentators do their usual run down highlighting some of the action related to the Cruiserweight scene from this past Wednesday night’s black-and-gold brand WWE NXT show — including the promo from Jordan Devlin promoting his upcoming return to confront Santos Escobar regarding the real Cruiserweight championship.

Once the promo from Devlin from this past Wednesday’s NXT show wraps up, we shoot back inside the CWC where we hear the familiar sounds of Ariya Daivari’s theme song as “The Persian Prince” makes his way down to the ring for our featured bout of the evening here on this week’s installment of 205 Live.

As Daivari settles into the squared circle, his music fades down and the theme of August Grey hits the house speakers here in the Capitol Wrestling Center as the high-energy performer makes his way down to the ring.

The bell sounds and we’re off-and-running with our main event of the week here on 205 Live, as Daivari and Grey lock-up. The commentators talk about the fans in the CWC via the ThunderDome being strongly behind Grey in this one-on-one contest.

Grey enjoys some time in the offensive driver’s seat, as he is controlling his opponent on the mat with the side head-lock. Daivari fights back to his feet and escapes, however Grey uses his speed and quickness to ground Daivari again, where once more he slaps a tight side head-lock on him that he has trouble escaping.

Finally, Daivari does escape it again and now he goes to work on Grey with some kicks. He hits the ropes but Grey catches him coming off with a slam. Daivari shifts the momentum in his favor again, however Grey reverses and goes for a back-slide pin. Daivari kicks out and rolls out to the floor to re-group.

We see Grey contemplate a dive to the floor onto Daivari. His brief hesitation ended up costing him, as he ran right into a well-timed big shot from Daivari on the floor. This allows “The Persian Prince” to take over the offensive driver’s seat in the bout. He slides Grey’s head over the end of the ring apron while standing on the floor, where he follows up by executing a nice neck-breaker from that position at ringside.

Back in the ring, Daivari continues to work over Grey, who fires up briefly but is turned inside-out by Daivari with a big clothesline to hault his attempt at re-gaining his footing in the offensive space of this showdown. Daivari elbows the collar bone and shoulder blades of a seated Grey before putting a rear chin-lock on him and isolating the arm of Grey at the same time.

We see a failed Unprettier attempt before Daivari continues to keep the offensive control maintained over his opposition. He heads to the top-rope as Grey is grounded. He comes flying off, but no one is home as Grey moves just in time. Grey now fires back up for a big comeback, as he blasts Daivari with a good shot and then picks up his pace and intensity. Both guys have the same idea, as they hit a double-clothesline at the same time.

After both guys are slow to recover, it is Grey who fires back up with plenty of energy as he waits for Daivari to get up and then begins going to work on him. He whips him into the corner and works him over and then slams him down. He fires up and plays to the crowd and hits his version of the emerald throw-sion for a close near fall attempt. Daivari comes back to life briefly and goes for a move, but Grey counters and hits a modified inverted suplex for another near fall.

Grey times Daivari in the corner and charges at him, but “The Persian Prince” side-steps him and blasts him with a kick. He sets Grey on the top and hits the iconoclasm. He heads to the top-rope after slamming Grey down and comes flying off with a big Persian Lion Splash. He covers Grey, but somehow he kicks out at two-and-a-half. Daivari looks for the figure-four leg-lock for the second time in the match, however Grey sees it coming and kicks him off just in time. He follows-up with a big slam and a near fall attempt of his own.

Now Grey heads over to Daivari, who is standing on the opposite side of the ring ropes on the apron. Daivari hits a cutter on Grey as he charged at him, using the top-rope to his benefit. Grey recovers quickly and fires up again. He hits a sequence of moves and then heads to the top-rope for a high-flying cross body splash. Daivari avoids it. Grey is slow to recover but when he does he flips over Daivari’s head from the ring apron outside of the ropes. He tries flipping into a pin attempt, however Daivari sits on it and holds Grey’s leg for a pin attempt of his own.

He is ultimately caught trying to hold onto the ropes during the pin attempt by the ref so the match continues. Grey fires up and gets Daivari down and covers him, putting his feet on the ropes behind him for an unfair advantage that helped him secure the three-count. Vic Joseph loves it but Nigel McGuiness react to the sneaky finish from Grey as we see replays and Daivari complains post-match to the ref. That does it for this week’s 205 Live. Thanks for joining us!