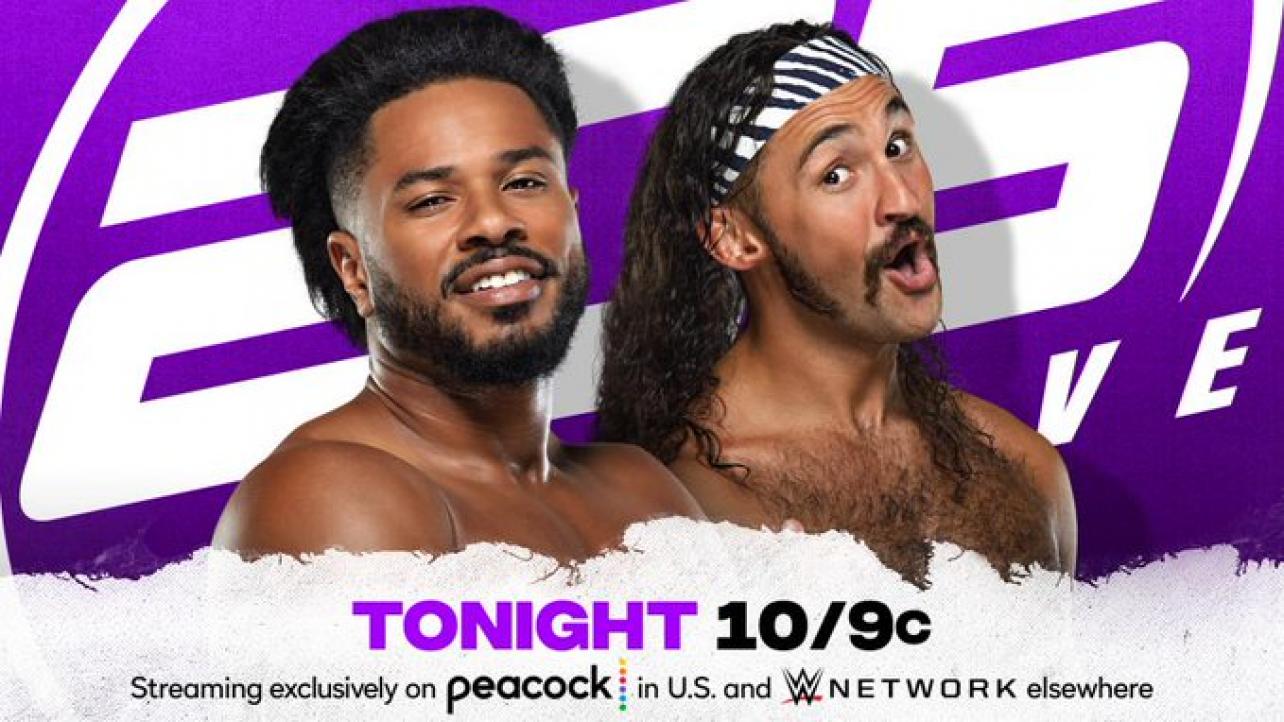 On tap for tonight’s purple brand program is an exciting pair of matches, as August Grey goes one-on-one against Ashante “Thee” Adonis, while The Bollywood Boyz vs. Tony Nese & Ariya Daivari is also scheduled in tag-team action.

This week’s show kicks off with the usual traditional signature open that starts off the program each and every week.

From there, we shoot live inside the Capitol Wrestling Center in Orlando, FL. where the commentary duo of Tom Phillips and Nigel McGuinness welcome us to the purple brand program.

After that, we hear the familiar sounds of the official entrance theme song of The Bollywood Boyz, as Sunil and Samir Singh make their way down to the ring. This, as always, results in an affible McGuinness. Taking the place of Vic Joseph, in not wanting to play along, is Phillips, although the Singh Bros eventually get him up and dancing around as well.

With the Boyz settling into the ring now, their music fades down and the music for Ariya Daivari plays, as “The Persian Prince” makes his way out. He stops at the top of the stage and awaits the theme of his partner, which begins playing now. “The Premier Athlete” Tony Nese joins him and the two OGs make their way to the ring.

As they settle into the squared circle for tonight’s opener, Phillips and McGuinness talk about the new red ring attire for Nese and Daivari. They point out that the two have a proven track record against the Singh Bros as the bell sounds to start this one off. We see Nese and Singh kicking things off for their respective teams here in the early goings.

It doesn’t take long before Daivari tags in. The OGs are having their way with The Bollywood Boyz coming out of the gate. Nese tags back in and picks up where Daivari left off, taking it to Samir as Sunil watches on with his arm outreached, hoping for the tag and his first in-ring action in this opening contest — the first of two scheduled matches here this evening.

Nese goes for a big spin kick but Samir was ready for it, so he counters. He stands up but eats a dropkick from Nese, who then tags Daivari in and holds the leg of his opponent so “The Persian Prince” can get in a free shot. He hits a pair of follow-up elbows and goes for the cover, but Singh kicks out at two. Right when he goes for the tag, his partner is yanked off the ring apron by the opposition.

Sunil finally gets the hot tag and comes into the ring like a man possessed, looking to help the Singh Bros earn their first victory as a team over the OGs of Nese and Daivari. We see a huge flying clothesline off the middle rope from Singh into a pin attempt, however Daivari kicks out before the count of three and then crawls over to make the tag to Nese. The Singh Bros make a blind tag and go for a top-rope double-team spot, which connects. They try for the pin off of that but Nese kicks out after the count of two.

We see another tag from the Boyz. They go for a double super kick spot and all hell breaks loose with all four men getting involved. We see the Singh Bros dive out to the floor on Daivari, however the legal man comes back into the ring right into a Running Nese from “The Premier Athlete” followed by the 1-2-3. The OGs continue their undefeated streak against The Bollywood Boyz in tag-team action with the win here tonight.

After the tag-team opener, we head to a quick ad break, which includes some commercials for WWE Championship belts available at WWE Shop, as well as the “Stone Cold” Steve Austin trailer for WrestleMania 38 in Texas next year.

From there, we head to the commentary duo of Tom Phillips and Nigel McGuinness, who give us our weekly recap of action from the Cruiserweight scene from this week’s episode of WWE NXT on the USA Network from this past Tuesday night.

We see KUSHIDA’s open challenge defense of the Cruiserweight title against Oney Lorcan from three days ago and then the post-match situation involving Santos Escobar henchmen Legado Del Fantasma, which helped the former champion beat down the new title-holder until MSK came to make the save.

Finally, we head back down to the ring where the ring announcer begins the formal ring introductions for our main event of the evening.

With that said, the theme for the popular August Grey hits as the modern day mini-Macho Man-looking Cruiserweight performer makes his way down to the ring.

Now that he is settled into the squared circle, his music dies down and the theme for his opponent, Ashante “Thee” Adonis plays. He heads down to the ring and now we’re about to get our second and final match of the evening underway.

The bell sounds and we wait as Adonis takes his sweet-ass(ed) time removing his excess ring attire. Now, the two finally lock up and “Thee” Adonis backs Grey into the corner. He gives him a clean break, sort of, as he yanks his head-band off of his head and brushes it in his face. Grey gets in some offense, takes the head-band back and does the same to Adonis.

After the brief comedy intro into this main event encounter, the pace and intensity picks up and these two are getting after it for real now. Grey is faring well, however Adonis uses a big elbow that lands flush to the jaw of Grey to take a comfortable spot in the offensive driver’s seat in the early goings of this bout.

We hear the commentators talk about Grey’s big win from last week’s show as he starts to shift the offensive momentum in his favor. Grey attempts to capitalize on a brief offensive burst with multiple pin attempts, however Adonis avoids keeping his shoulders down for a three count on each occasion and then proceeds to take back over control of the contest, driving his knee into the back of Grey repeatedly on the mat.

Grey starts to take over again, however Adonis cuts his attempt short and grounds the promising contender again, working him over on the mat. He looks for the captain’s hook but Grey hangs on. He slaps a side head lock on him as we see Ariya Daivari make his way down to ringside. Adonis notices him as Grey fights his way free. The two start exchanging shots of punches and chops, with Grey getting the better of the two.

He hits a running bulldog and heads to the top-rope, where now he, too, notices Daivari. He flies off the top with a spinning cross-body. He connects. He waits for Adonis to get up and then dumps him to the floor in front of Daivari. He thinks about a slide but pumps the breaks. As soon as he gets out on the floor, both he and Adonis take each other out. Daivari crouches down in front of them and watches as they struggle to make it to their feet. Back in the ring, Grey is distracted by Daivari at ringside, leading to The Long Kiss Goodnight from Adonis. 1-2-3. That’s all she wrote.