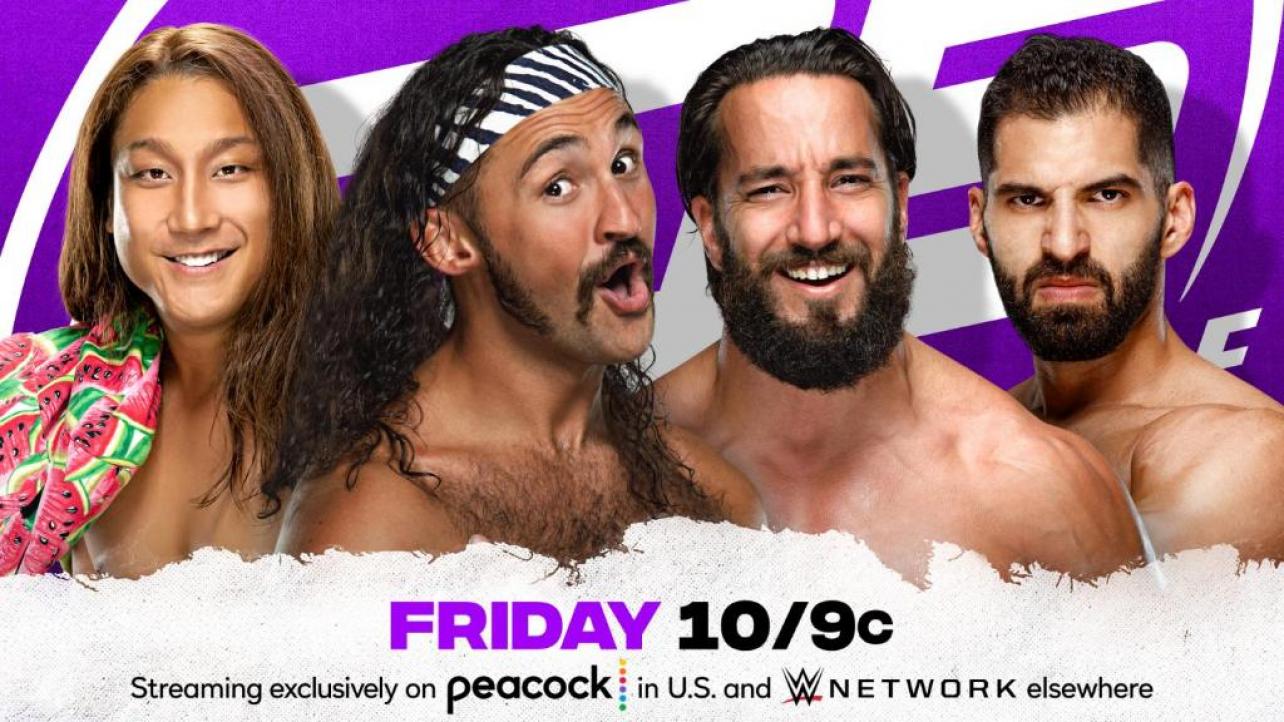 On tap for tonight’s purple brand program is an exciting pair of matches, as Ikemen Jiro makes his debut alongside August Grey to take on the duo of Tony Nese & Ariya Daivari, while Ari Sterling also debuts in singles action against Samir Singh of The Bollywood Boyz.

This week’s show kicks off with the usual traditional weekly video package that opens the program each and every week. After it wraps up, we shoot inside the Capitol Wrestling Center as Tom Phillips welcomes us to the show and mentions that tonight we will bare witness to two new faces in the Cruiserweight division.

From there, the theme of Ari Sterling hits and the first of the two newcomers makes his way down to the ring for our first of two advertised matches for tonight’s show.

As Sterling settles into the ring, the camera shoots over to the commentary table for the first time of the evening, as Nigel McGuinness checks in with the aforementioned Phillips on commentary.

The Bollywood Boyz’ theme hits and the Singh Bros dance their way down to the ring, as Samir Singh will be competing in singles action. The two stop by the commentary table and goof around with Phillips and McGuinness on the Bolly Cam.

The bell sounds and we’re off-and-running with this week’s purple brand program. The two shake hands in a sign of sportsmanship and then they get after it. Sterling gets off to a rocky start, bumping into Singh and losing balance in a basic spot early on, but from there on out it has been smooth-sailing.

Sterling gets Singh out on the floor and hits a leap of faith landing perfectly from the ropes to the floor on one-half of the Singh Bros. Back in the ring he hits a follow-up high spot for a close near fall over the veteran tag-team performer. Moments later, Sterling misses a dropkick attempt and this one mistake allows Singh to shift the offensive momentum in his favor.

Singh gets Sterling out on the floor and smashes him back-first into the ring apron. He gets Sterling back in the ring and goes for the cover but doesn’t get it. He then locks Sterling into a single-leg Boston Crab, which he cranks away on until Sterling finally makes it to the ropes, forcing the referee to break the hold. Singh tries peeling Sterling off the ropes as he hangs on with his hands, but the momentum simply launches Sterling into the air, which he capitalizes on by following through with a swift kick to the dome of the Bollywood Boy.

Regardless, Singh takes back control of his opposition and grounds him, continuing to control the action in this opening contest until another big kick from Sterling finally gets him back into the offensive mix for the first time since his opening sequence. He hits a crazy flipping leg drop onto the back of a standing Singh’s neck. Seconds later he smashes Singh face-first into the mat with an innovative spot that appears to be his finisher. It served the purpose either way, as Singh is finished off. 1-2-3. Sterling wins in his 205 Live debut.

After a quick ad break, which included some in-house plugs for WWE Shop and the next installment of the A&E Biography: WWE Legends series, which features Booker T and premieres this weekend, we shoot to our weekly recap of Cruiserweight action on the black-and-gold brand, as we see footage from this past Tuesday night’s edition of WWE NXT. The promo segment from Santos Escobar and Legado del Fantasma and KUSHIDA is shown.

We return from the NXT recap segment inside the CWC to the familiar sounds of the entrance theme of The OGs of 205 Live, as Tony Nese and Ariya Daivari make their way out and head down to the ring.

As they settle into the ring, their music cuts off and then the theme for August Grey hits. Grey comes out but stops at the top of the stage and cuts a quick promo about how Daivari and Nese have had a problem with him since day one simply because he likes to have a little fun.

With that in mind, he introduces the second of the two new faces debuting on this week’s show, as he brings out Ikemen Jiro. Jiro comes out to some fun-spirited anime-sounding music as colorful lights fill the CWC and the commentators inform us that Jiro is a colorful, fun-loving personality who keeps his bright yellow jacket on when wrestling.

The bell sounds and here we go. Grey takes his jacket off and tries telling Jiro to do the same, but Jiro, off-mic in broken English, appears to explain to him that that’s something he doesn’t do. Jiro locks up with Nese, who kicks things off for The OGs of 205 Live in our second of two advertised matches for this week’s show. Jiro enjoys some brief moments of offensive control, however it isn’t long before Nese takes over.

Jiro gets in a shot again and makes the tag to Grey, as Nese also makes the tag. Daivari takes over the action in the ring, taking it to Grey early on. Grey answers back with a brief shot, but Daivari puts him right back down and cuts him off from making a tag, only for him to eventually make the tag seconds later. Jiro takes the hot tag and comes in with his yellow jacket still on. He blasts Daivari with a good shot and then does a head-stand in the corner and claps his feet together. McGuinness points out that he used to do that on commentary.

Nese hits the ring and Jiro makes him eat a shot for his troubles as well. Moments later, however, Daivari catches him off guard and grounds him and then tags in Nese who goes to work on him with ferocious punches and kicks. Nese brings Jiro into his corner of the ring and tags Daivari back in. Daivari blasts him with some punches and then opens his yellow vest and chops the piss out of him.

Jiro gets in some offense of his own but it isn’t long before some double-team action from Nese and Daivari shifts the momentum back into the favor of The OGs of 205 Live. Grey gets the hot tag and goes on a hot streak for a couple of minutes but again some veteran tactics from Nese and Daivari sees them take back control of the action. Nese hits his leaping moonsault in the corner off the ropes for a close near fall. Afterwards we see Nese and Daivari try and double-team Grey, however Jiro hits the ring to make the save.

They end up gobbling up Jiro while Grey is down selling. They hit a double-team spot on Grey but Jiro breaks up the follow-up pin attempt. Jiro finally gets the tag and he comes in like a wild man, blasting Nese with shots of his vest over and over again. He blasts Nese with a big kick that knocks him out to the floor. He pulls the top rope down as Daivari charges at him, which sends him out to the floor as well. He hits a follow-up moonsault to take out both guys on the floor. He rolls Nese back in the ring and comes off the top with a senton that connects, but Daivari pulls Nese out of the ring during the pin attempt.

Grey hits a dive through the ropes to take out Daivari. Jiro hits one to take out Nese. He brings Nese back in the ring and blasts him with a big kick and scores the follow-up pin. Jiro wins in his 205 Live debut as well. Jiro and Grey celebrate the victory as Nese and Daivari retreat to the back.