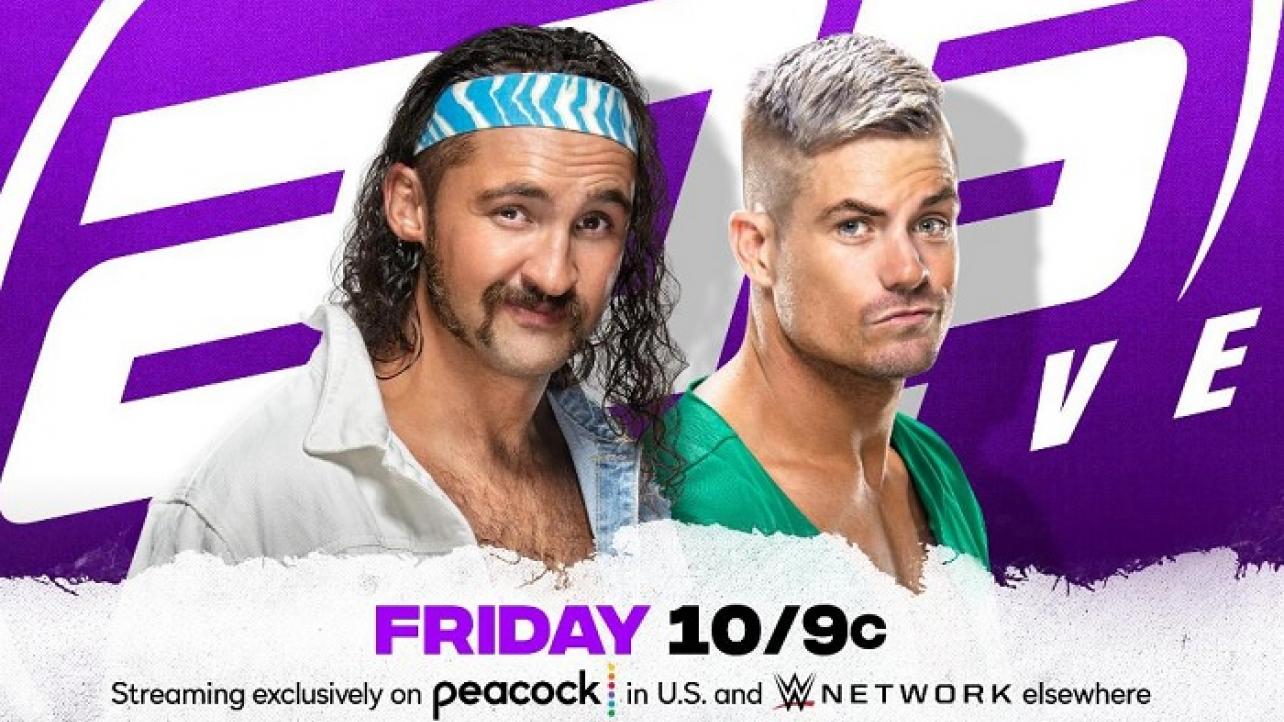 On tap for tonight’s purple brand program is an exciting pair of matches, as Ikemen Jiro goes one-on-one against Ariya Daivari, and August Grey takes on Grayson Waller in singles competition.

In a day that was absolutely awful for the 205 Live brand in particular following the WWE releases of multiple Cruiserweights, including a couple scheduled for this week’s show, tonight’s purple brand program kicks off with the usual video intro on Peacock.

From there, we shoot inside the Capitol Wrestling Center in Orlando, FL. as the camera pans around the venue and we hear the commentary duo of Vic Joseph and Nigel McGuinness welcome us to the show.

From there, Ikemen Jiro’s theme hits, the fans react and the newcomer to 205 Live makes his way down to the ring for this week’s opening contest. As he settles into the ring, the commentators talk about how likable and over the newcomer is here on the scene in the Cruiserweight-themed show.

His music fades down and the familiar sounds of an OG of 205 Live, who is no longer employed by WWE, Ariya Daivari makes his way down to the ring. The bell sounds and we’re off-and-running with our first of two advertised matches for tonight’s show.

The fans immediately break out in pro-Jiro chants. Jiro, still wearing his corn-on-the-cob ring jacket, does a cartwheel and then locks hands in a test of strength with “The Persian Prince” to get this one going. Daivari powers Jiro down and yells about being the man around here, calling this his show. Yikes.

Jiro fights back and gets to his feet. He arm-drags Daivari down and controls his arm, opening up and showing off his fancy yellow jacket as he goes to work on Daivari until they return to their feet and Daivari reverses and shoulder-blocks Jiro down. He slaps a side head lock on Jiro and then ends up in one from Jiro himself that he struggles to escape like Jiro did his.

We see Daivari pulling at the hair of Jiro to break free and then he blasts Jiro in the bread basket with a big knee to slow down his momentum. The fans try and rally behind Jiro, however Daivari continues to go to work on him. Jiro fights back into competitive form and does a head-stand on the top rope, clapping his feet while upside down. He returns to the mat and takes over control of the offensive momentum in this one, showing off his jacket all-the-while in his fun-loving kind of way.

Daivari turns the tide on the ring apron by dropping Jiro head and spine-first on the hard part of the apron as he drops down to the floor. He takes over from there and rolls him back into the ring for a near fall attempt. He drives his knee into the back of Jiro repeatedly and then blasts some elbows into his collar bone and shoulder area. He slaps a rear chin lock on him while on the mat but the fans rally behind Jiro and he returns to his feet, backing Daivari into the turnbuckles in the corner to break free.

“The Persian Prince” jumps right back on Jiro, however, and taunts the fans, asking them who sucks now. They all respond “YOU!” and then break out into a “You still suck!” chant as he beats down Jiro some more. Jiro finally hits a nice suplex that slows down Daivari’s momentum and begins to shift things into his favor as he fires up for a big comeback while the fans cheer him on. Jiro leapfrogs from the ring apron and bounces off the ropes for a big back-flip splash onto Daivari for a close near fall.

He stalks Daivari from the corner and looks for the Ikemen Slash, but Daivari avoids it. Ikemen blasts him with a super kick that sends him to the floor and then follows up with a springboard Asai moonsault splash. He rolls him back into the ring and heads to the top rope. He hits a big senton and goes for the cover, however Daivari still manages to kick out at the count of two.

The two fight back and forth on their feet. Ikemen hits the ropes but Daivari hits them right after him and catches him with a swinging neckbreaker. He follows that up with a DDT for a close near fall. Daivari looks frustrated at his inability to put away the 205 Live newcomer. He shows a mean streak and stomps away at Jiro in the corner of the ring. Ikemen starts to fight back but Daivari drops him with a nasty kick in the corner. Ikemen ends up hitting his Ikemen Slash out of nowhere and scores the pin fall victory.

We shoot backstage to the tag-team partner of Ikemen Jiro, as McGuinness points out on commentary, as we see August Grey facing the camera.

Grey addresses the hype surrounding another newcomer to the scene on 205 Live — Grayson Waller. He says we’re going to find out tonight if it is real or not.

From there we shoot to a quick ad time out, which includes commercials for WWE Shop and the upcoming WWE summer tour returning to various spots across the U.S. for the first time since the global pandemic.

After that we return inside the CWC where the theme for the strongly-hyped newcomer to the purple brand program, Grayson Waller, hits and he makes his way down to the ring for our main event of the evening.

The commentators talk about Waller being a perfect 2-0 since joining the ranks in 205 Live, and will look to improve his flawless undefeated record with a big win tonight over the proven August Grey.

Speaking of Grey, his music hits and the mini Macho Man look-alike heads down to the ring with his flashy ring gear and trademark fun-loving personality, playing to the crowd while looking ready for business.

The bell sounds and we’re off-and-running with our featured bout of the evening here on 205 Live. They lock up and Waller strong-arms Grey down to the mat. He pats him on the head like a dog and then mocks his mannerisms. He takes him down again and walks over his back and taunts him some more.

Waller finds himself on the defensive briefly, but gets right back to work on Grey, nearly finishing this one early, as McGuinness points out on commentary. From there, Waller begins struggling to keep up with one of the bigger tests he’s faced in his three appearances here on the purple brand program, as Grey is dominating the action for a prolonged period of time at this point.

Finally, Waller lands some vicious knee strikes to the mid-section of Grey that allows him to regain his footing in the offensive lead. The fans taunt Waller with a “You still suck!” chant and he brushes it off and dances to mock them, prompting them to break out in a “You can’t dance!” chant. The fans are letting him have it, but Waller is staying focused and working over Grey, finally acknowledging them with a cold stare after blasting Grey with a particularly good shot.

Grey gets in a hope spot and then we see a quick triangle choke attempt on the mat. Waller blasts Grey with a big kick that drops him for a close near fall attempt. Waller slows the pace down, stalking behind Grey and taunting him, shouting at him as he goes back to work on him. He delivers a back-breaker to Grey over his knee for another near fall. He puts a sweat band on and mocks Grey, leading to the fans getting on his case again.

He hangs Grey upside down in the tree of woe in the corner and then runs around and lands a baseball slide to the floor, choking Grey from behind. He re-enters the ring and the fans break out in another “You still suck!” chant. Waller taunts Grey while he is upside down in the tree of woe. Grey lands a shot while upside down but it only angers Waller and leads to more punishment for himself. He gets Grey across his back and lands a rolling splash. He heads to the middle rope and lands a big elbow drop for back-to-back near fall attempts, however Grey hangs on and keeps this one going.

Waller slaps a modified Million Dollar Dream choke hold on Grey. They fight back to their feet and Grey starts to fire up for a comeback. He lands some good body shots and a nice elbow up top before clotheslining Waller out to the floor and hitting a dive through the ropes and splashing on him. Back in the ring, Grey hits a huge spot off the top-rope that connects. He delivers some follow-up chops and drops Waller. Waller puts a triangle choke on the bottom rope to keep himself put to recover. Grey fumbles for him and eats a shot and then Waller follows up with a big stomp for the pin fall victory. Waller taunts Grey some more after the pin fall as the commentators talk about him improving to a perfect 3-0 with this win.