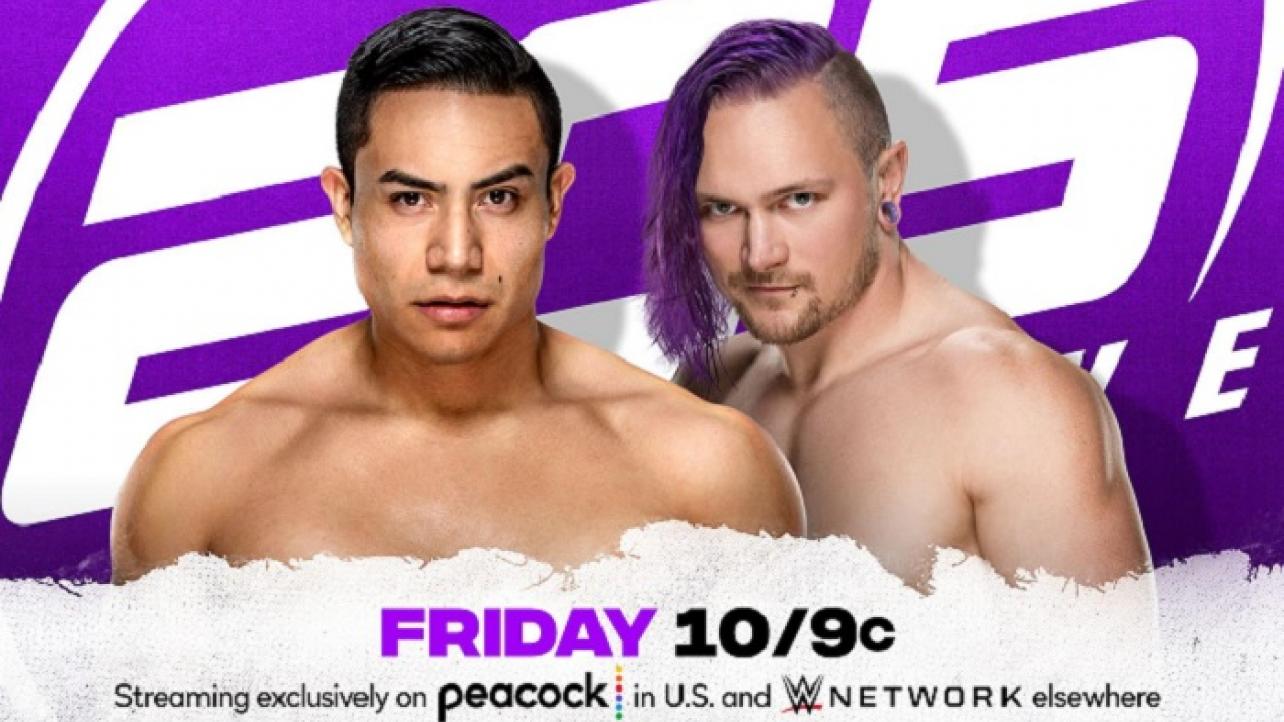 On tap for tonight’s show is an exciting pair of matches, as Guru Raaj goes one-on-one against Asher Hale, while Jake Atlas meets Ari Sterling in singles competition.

This week’s show kicks off with the WWE Then. Now. Forever. Together signature and then we shoot to the 205 Live opener and enter into the CWC where Vic Joseph comments on a great episode of SmackDown just wrapping up.

From there, the familiar sounds of Asher Hale’s theme hits as he makes his way down to the ring for this week’s opening contest.

As Hale settles into the ring, the camera pans over to Joseph and Nigel McGuinness at the announce desk at ringside for some quick comments.

After that, Guru Raaj’s theme hits and out he comes for what will be a rematch of a bout from last week’s purple brand program. The bell sounds and we are off-and-running.

The action gets underway as fans break out in dueling chants for both guys as the match gets started. We see some back-and-forth action and then Raaj jumps into the offensive lead, prompting Hale to take a moment on the floor to regroup.

Back in the ring, Hale goes to work on Raaj, isolating the arm of the 205 Live star and going to work on softening it up. He brings Raaj down to the mat but then he pops up and reverses, working over Hale’s arm.

Hale escapes and gets control of the limb of Raaj again but yet again, Raaj frees himself and gets Hale down on the mat with a side head lock, controlling him until they scramble up, where Raaj uses the turnbuckles in the corner as momentum to bring Hale right back down to the mat.

We see Hale get free again, but this time Raaj clotheslines Hale over the top and out to the floor. He immediately grabs his own hand in pain, which the commentators point out on the broadcast. Hale grabs Raaj from the floor and gets him down on the apron. He puts his feet on each side of Raaj’s head and does a twisting corkscrew that looks to snap the neck of his opponent.

Now we see Hale putting the boots to Raaj as McGuinness puts over the martial arts expert. Hale is now comfortably in control of the action, blasting Raaj with knees and hitting a nice snap suplex for a near fall as the crowd starts to come alive with stomping and chanting. Hale slaps a modified Indian Death Lock on Raaj and looks cocky as he cranks back on it.

The fans break out into a “you still suck” chant directed at Hale. He turns the Indian Death Lock into a bit of a surfboard stretch type of hold, eventually leaning to his side to add pressure on the submission. He lets it go and blasts Raaj with an uppercut and then peppers him with kicks, stopping to stomp on his injured hand.

Raaj fires up when he gets back to his feet and he ambushes Hale, hitting him with a flurry of strikes in the corner. Hale keeps trying to escape but Ivan Drago style, he pushes him back into the corner and continues hitting him with an assortment of strikes. He hits a dropkick and a bulldog for a near fall, but Hale hangs on.

We see Guru go for the same backslide that earned him the victory over Hale on last week’s show, however Asher avoids being kept down for the three count and within seconds after kicking out, Hale finishes Raaj off and picks up the pin fall victory after a modified brainbuster of sorts.

Following the conclusion of the opening contest, the commentators plug the main event pitting Ari Sterling one-on-one against Jake Atlas, and then we head to a quick ad time out.

After the commercials wrap up, we head back into the CWC where the commentators continue plugging upcoming events like SummerSlam and NXT TakeOver 36.

From there, we hear the familiar sounds of the entrance theme of the purple brand program veteran, Jake Atlas. He makes his way down to the ring for our second of two advertised matches for tonight’s show to a nice reaction from the crowd in attendance.

He settles inside the squared circle and his music dies down. Now the theme of Ari Sterling hits and the Lexington, Kentucky native makes his way down to the ring as the commentators offer high-praise to this 205 Live star.

The bell sounds and we are off-and-running with our final bout of the evening. We see some back-and-forth action and then the crowd starts to come alive as these two hit counter-after-counter on each other, with neither man establishing any real offensive momentum yet.

He goes for a pin attempt but Atlas reverses into one of his own. Neither guy is finished off and the match continues. We see some big chops from Atlas in the corner but then Sterling blasts him with a big kick. Off the ropes Sterling walks right into a picture-perfect kick from Atlas.

Jake starts to pull into the lead now as he scoops Sterling and slams him down for another near fall. The pace is slowing down now that Atlas is controlling Sterling on the mat with a leg scissors around the body. He switches to a rear bear hug and squeezes away at Sterling as fans break out into dueling chants showing support for both guys.

Ari breaks free and turns Atlas inside-out with a clothesline that switches the momentum in his favor. Sterling continues to dominate the offense, looking for a number of near falls. Atlas ends up cutting his offensive run short and he slows the pace down, controlling Ari on the mat and squeezing the life out of his mid-section again.

Sterling starts to take back over control of the offense again. He hits a pair of flatliners on Atlas that nearly puts him away, however the 205 Live veteran hangs on and keeps this one alive. Atlas tries firing up on offense and after being slowed down by a back elbow by Sterling, we see Atlas catch Sterling flying off the ropes and blasts him with a fall-away slam for a near fall.

We see Atlas drag Sterling over closer to the turnbuckles and then he begins climbing. Sterling pops up before he can fly off with anything. Sterling punches at Atlas while he is seated on the top and now he begins climbing up after him. Atlas flips Sterling off backwards but Sterling lands on his feet and runs over and pops up, pulling Atlas down with his legs and slamming him on the mat for another near fall attempt.

Now we see Sterling put the boots to Atlas before going to the top rope himself. He goes for the 450 splash but Atlas avoids it and ends up hitting a german suplex on Sterling into the turnbuckles. He hits his cartwheel DDT off the top rope after that and covers Sterling, scoring the pin fall victory. Thanks for joining us!