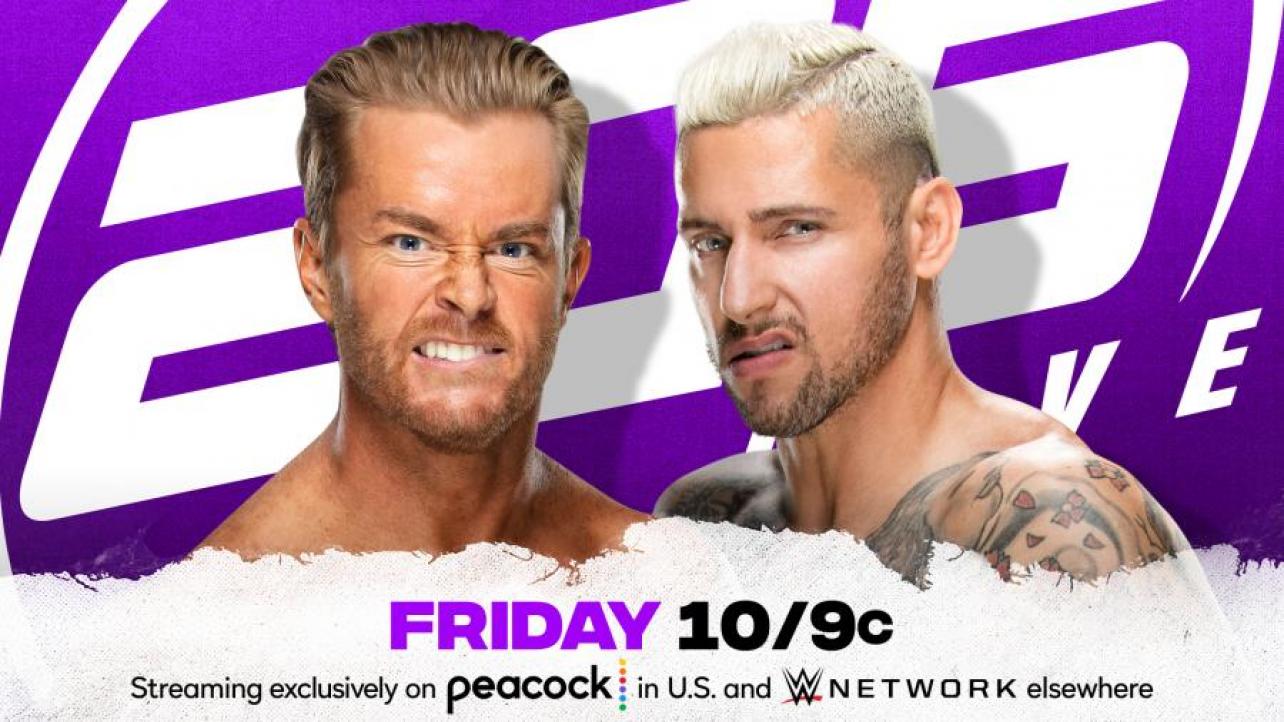 On tap for tonight’s show is an exciting pair of matches, as Drake Maverick makes his 205 Live return against Asher Hale, while Ikemen Jiro goes one-on-one against Grayson Waller in the other bout.

This week’s show kicks off with the usual signature intro and then we shoot right inside the CWC where Vic Joseph welcomes us to the show.

From there, we hear the familiar sounds of the theme music of Grayson Waller as he heads down to the ring for tonight’s opening contest.

As Waller settles into the ring, we hear Nigel McGuinness join Joseph on commentary, as he sings the praises of Waller. His music dies down and now the theme for his opponent hits.

Ikemen Jiro makes his way out in a flashy watermelon jacket. He heads down to the ring in his fun-loving way and settles into the squared circle for our first of two scheduled matches this evening.

We see the action continue and Jiro ends up dumping Waller out to the floor at ringside. He hits a dive out to the floor but things quickly switch into Waller’s favor. The action resumes in the ring and we see Waller dominate for a lengthy run.

Finally, Jiro starts to amp up for a big comeback but then ends up falling victim to a huge stunner from Waller for a super close near fall. He survives and starts firing up once again and after a few near falls he finally secures the pin and the victory in an excellent opener.

After the opener wraps up, we head to a quick commercial break. When we return from the break, Asher Hale makes his way down to the ring for our second and final match of the evening.

Hale settles in the ring and then when his music dies down, the theme hits to bring out Drake Maverick. The former GM of the purple brand makes his way out to a nice reaction from the WWE Universe inside the CWC.

The bell sounds and these two are off and running with our main event of the evening. Hale jumps off to an early offensive lead and he leaps up and lays on the ropes arrogantly to taunt the former 205 Live GM.

We hear the fans break out in random chants as Hale continues to dominate and taunt Maverick. Meanwhile the commentators talk about the history of Drake on the purple brand and plug NXT on SyFy again next week.

Maverick takes a nasty landing after Hale whips him face-first into the middle turnbuckle after tripping him up. Hale hits a nice neckbreaker and goes for the cover, only for Drake to kick out at one. Hale kicks at Maverick and then spears him in the corner of the ring.

Joseph and McGuinness on commentary sing the praises of Hale’s abilities on the broadcast, putting over his martial arts skills and talents. We see him do the foot on each side of the head twisting neck-snap spot under the bottom rope. Hale yanks at Maverick in a rare submission and Drake screams out in pain audibly on the broadcast.

Hale charges at Maverick looking to spear him in the corner again but Drake side-steps him and helps shove him with added momentum face-first into the ring post. Maverick is firing up and getting in an offensive burst now. He hits a big Sliced Bread out of the corner to snatch victory from the jaws of defeat in an excellent main event. The show goes off the air after we see some highlights of the bout. Thanks for joining us!