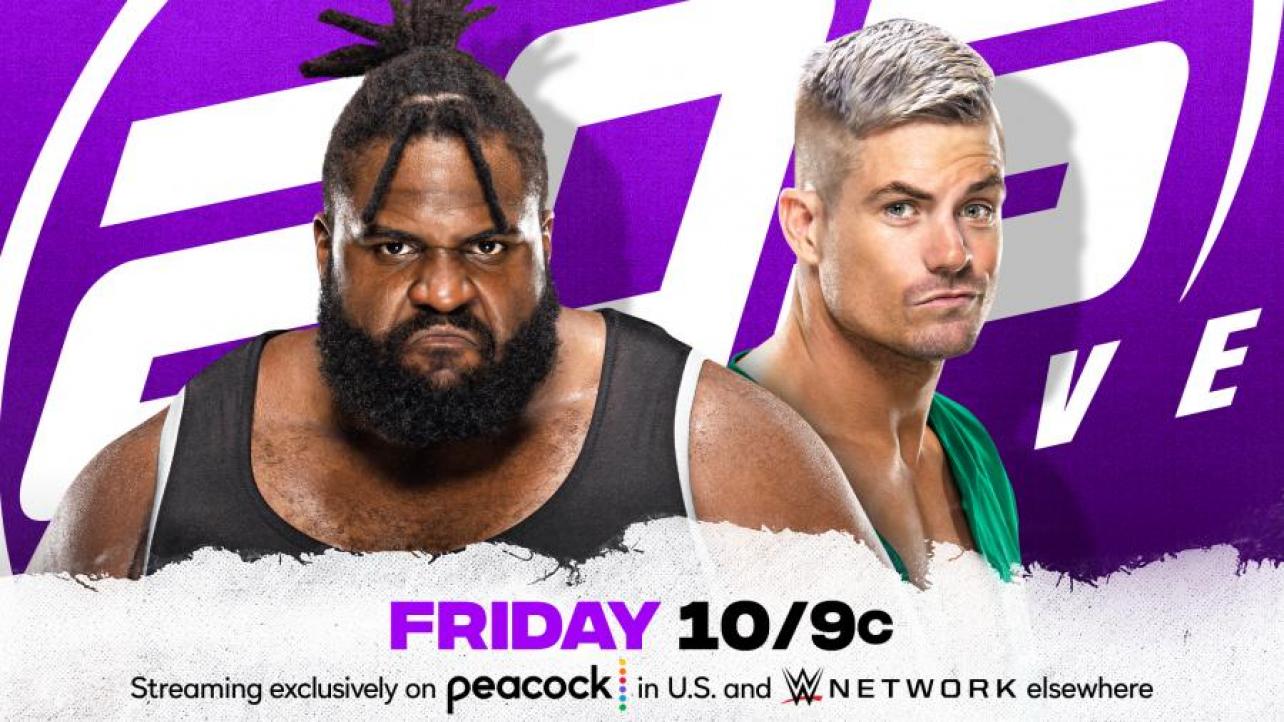 On tap for tonight’s show is an exciting pair of matches, as Grayson Waller takes on 400-plus-pound Odyssey Jones, and the 6’8” Josh Briggs goes one-on-one against Asher Hale.

This week’s show kicks off with a live crowd shot as a cold open, we then shoot straight down to the commentary desk where Vic Joseph and Nigel McGuinness welcome us to the show as the 205 Live theme plays in the background.

The two mention the upcoming start of the 2021 NXT Breakout Tournament, before plugging the two matches featuring non-cruiserweight stars on tonight’s show from the tourney.

From there, the first big man appearing on this week’s purple brand program, Josh Briggs, makes his way down to the ring for the first of two matches scheduled for this evening.

As Briggs settles into the ring, his music dies down and the theme for his smaller opponent, Asher Hale plays and he makes his way down to the squared circle.

The bell sounds and the opening contest is off-and-running. The size difference is immediately noticeable and instantly plays a factor, as after all the crowd cheers and chants in favor of Hale, it is Briggs who over-powers and rag-dolls Hale in the early goings.

Hale uses his submission-based offensive style to try and play to his benefit due to the size difference, however a flying armbar attempt does him no good as Briggs muscles out and then slams Hale down. He continues to dominate the action with power-style moves like suplexes and slams, all-the-while the WWE Universe in attendance tries to rally behind Hale, to no avail.

Once again we see Hale try and fight back into competitive form, and it starts working briefly, until one clubbing forearm to the back flops Hale and leads to Briggs arrogantly stalking and continuing to punish him with ease. He hits a running boot to the grill of Hale and then stops and stares dead into the camera before going for a near fall. Hale kicks out and ducks out to the floor in an attempt to recover.

Briggs notices this and goes out after him. Hale sees him coming and jumps back in the ring. As Briggs comes in after him, Hale uses his speed and kicks to pepper his larger foe as he tries to re-enter the ring. Briggs eventually does enter the ring and one big boot floors Hale and leads to another run of control of the offense for Briggs. The fans rally strong behind Hale, who escapes the clutch of Briggs. Hale lands some kicks and then avoids a big splash from Briggs.

Hale continues to blast Briggs with kicks and then he starts mixing in chops and punches. Briggs slows him down with one big knee but then Hale stumbles him with a dropkick to the legs and then a big enzugiri kick that rocks him as he stumbles into the corner. Hale blows a kiss and then drops down and takes out the knee of Briggs in the corner. He follows that up with a big tornado DDT into a pinfall attempt. Briggs kicks out. Hale slaps a crossface on him and Briggs slowly makes his way to the ropes, only for Hale to switch to an ankle lock as he yanks him back to the middle of the ring.

Briggs uses his much larger frame to kick Hale off of him. He hoists Hale up, who reverses into a pin attempt. Briggs kicks out. Hale continues to go to work on him and then climbs to the top rope he comes flying off with a double stomp attempt but Briggs moves and then turns him inside out with a JBL-like clothesline from hell to win.

We are shown a backstage interview where the opponent for Odyssey Jones, Grayson Waller talks about not being in the Breakout Tourney but saying that’s because he’s not a breakout performer, he’s the “now.”

From there, we move to a solo promo from Odyssey Jones, where the massive newcomer talks about being in the Breakout Tourney and how he’s going to first make a name for himself tonight with a win over Waller.

After that we get a recap from this past week where the eight men who will compete in this year’s NXT Breakout Tournament, including Briggs and Odyssey Jones, were announced.

Finally, we head back into the CWC where Grayson Waller’s theme hits and he makes his way down to the ring for our second of two scheduled matches here tonight.

He settles into the ring as the commentators talk about him being a perfect 3-0 here in the ring on 205 Live and quote his promo from a moment ago where he claims not to need to be in the Breakout Tournament because “he is the now.”

The theme for his opponent, the debuting newcomer, the large NXT Breakout Tournament competitor, Odyssey Jones plays and he makes his way down to the ring for tonight’s main event.

We hear the bell and this contest is now off-and-running. Waller goes at Jones early, but his offense bounces off the larger 400-pound Jones, who begins his onslaught as he tears into his smaller opposition with ease. He ends up shoulder blocking him clean out of the ring, where Waller complains to the commentators.

Jones easily works over Waller as McGuinness on commentary compares him to a Gorilla Monsoon in his prime. Waller gets the big man out of the ring and on the floor at ringside and then hits the ropes to build up a head of steam, which he uses to soar through the ropes, into the waiting arms of Jones. Jones catches him but Waller breaks free and shoves the big man face-first into the steel ring post.

Waller rolls back into the ring to break the count and as Jones slowly makes his way back into the ring still foggy-headed, Waller climbs to the top and catches him coming through the ropes with a flying leg drop off the top. Waller licks his chops now and smirks as he goes to work on Jones with offense in the corner. Jones turns him around but then Waller connects with a flying armbar over the top rope hanging over the apron.

Back in the ring, Waller jumps on a flying guillotine and squeezes away as Jones fades down to one knee. He eventually powers back up and muscles Waller up-and-over with a suplex in a sign of pure strength. The fans rally behind Jones now as the noise echoes inside the CWC. Waller catches Jones coming at him and blasts him with repeated knees in the clinch. He kicks him and then hits a rolling forearm.

He slides out of the ring and right back in before connecting with a stunner and a big kick for a near fall, which Jones kicks out of at one. He follows that up with a high spot off the top rope. He goes for the cover again and hooks the leg this time to earn a two-count from Jones, who keeps this one alive. Waller goes for a triangle choke submission off his back. Jones yells out in pain as the ref takes a closer look. Jones muscles him up and donkey kongs him out of it with a power bomb ala Rampage Jackson vs. Ricardo Arona in PRIDE FC.

From there, Jones appears to be going on a fired up comeback. He slams Waller on the top rope sideways in the corner and follows up with a big splash. He hits a big slam with authority and goes for the cover. 1-2-3. Jones picks up a big win in his debut as he heads into the Breakout Tourney as part of this year’s field.