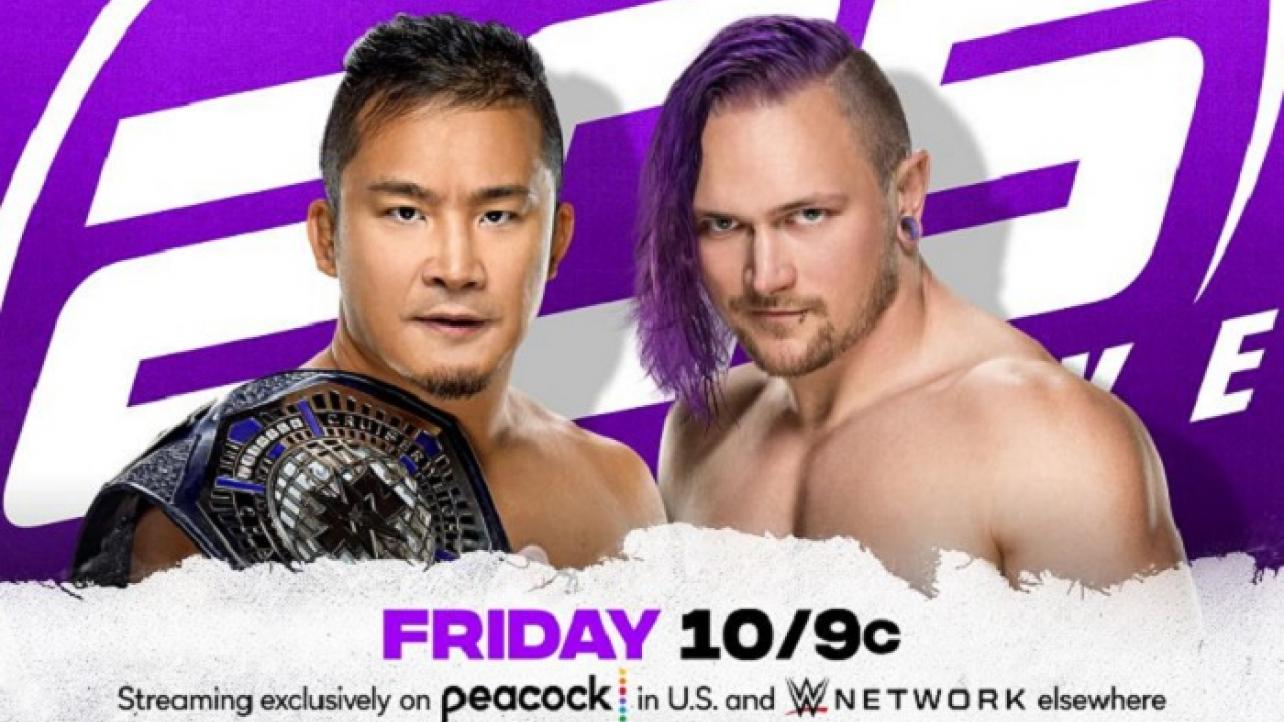 On tap for tonight’s show is an exciting pair of matches, as Leon Ruff goes one-on-one against Grayson Waller, and Kushida battles Ari Sterling in singles competition.

This week’s show kicks off with a live cold open shot inside the Capitol Wrestling Center in Orlando, FL., where Vic Joseph welcomes us to this week’s show.

From there, we hear the sounds of the entrance theme for the first competitor in our opening bout of the evening, as Grayson Waller makes his way down to the ring.

While he settles into the squared circle for what is the first of two scheduled matches this evening, the camera pans over to show the aforementioned Joseph on commentary alongside his broadcast partner, Nigel McGuinness.

The two set the tone for tonight’s purple brand program and then Waller’s music dies down and the theme for his opponent, Leon Ruff begins playing. Ruff heads down to the ring and settles in as well.

We hear the bell and we are off-and-running with this one. The commentators talk about the former NXT North American Champion being back on 205 Live as he himself acknowledged it while making his way out. The crowd is loud straight out of the gate for this one.

Waller takes it to Ruff early on and taunts him, which backfires as Ruff kicks him out of the ring. Waller is agitated and he rushes into the ring, running into a big forearm and dropkick from Ruff. Waller hoists Ruff up on his shoulders but Ruff rolls through and goes for a pin attempt. Waller kicks out.

Once again Waller gets Ruff on his shoulders and this time Ruff is brought down to the mat the hard way. The commentators talk about Waller’s recent win streak as he hits a nice stalled standing suplex for a near fall. Waller spends a couple of minutes in the offensive driver’s seat and then Ruff starts firing up for a comeback.

Ruff starts taking it to Waller but then Waller trips him up on the top-rope to cut his momentum dead in its’ tracks. Waller gets Ruff up for the Argitinian slam and then hops off the middle rope for a flying elbow smash for a close near fall. McGuinness responds by yelling, “Waller if ya hear me!” Nice.

As the action continues, Waller slaps a unique surfboard looking submission on Ruff on the mat. He looks for a backbreaker but Ruff hits an insane counter into a powerful DDT to shift the momentum back in his favor. The crowd rallies behind him as he hits a couple of spinning back elbows. He hits a flying leg lariat in the corner and goes for a follow-up bulldog. Waller shoves him off but Ruff hits a springboard cutter for a near fall.

Grayson Waller is still in this one as he kicks out and starts looking to work his way back into competitive form. Ruff misses a frogsplash and then Waller hits a running stunner from the floor. He goes for the cover but again somehow Ruff kicks out. Waller gets frustrated and the crowd again tries to rally Ruff back into the bout. The fans break out into a “This is awesome!” chant. Waller goes for a big spot but Ruff reverses and counters with a crucifix bomb for a pin fall victory in an absolutely excellent opening match on this week’s 205 Live.

Following a quick commercial break for some in-house WWE programs and special events, we return inside the CWC and hear the familiar sounds of Ari Sterling’s entrance music.

Sterling makes his way out and heads down to the ring as the commentators plug NXT TakeOver 36 during WWE SummerSlam week. He poses on the top turnbuckles as Joseph and McGuinness talk about Sterling’s recent performance on the show.

Now he awaits the entrance of his opponent as he settles into the corner of the ring. The theme hits to bring out Kushida and the NXT Cruiserweight Champion makes his way out and he too settles inside the squared circle for our second of two scheduled matches here this evening.

The lights in the CWC go out and turn blue as Kushia poses on the ropes. The commentators set the tone for our featured attraction of the evening and he takes his entrance shirt off. The ref calls for the bell and we’re off-and-running with this week’s purple brand program main event.

We hear the crowd immediately break out in dueling chants and loud cheers as Kushida and Sterling cross each other on the ropes and fly into each other. They hesitate to engage but then lock up and Kushida immediately isolates the arm of Sterling and goes to work on him.

Sterling hits a nice flying springboard out to the floor but is met by a big kick from the NXT Cruiserweight Champion. Back in the ring, Kushida continues to work over the leg of Sterling that was softened up moments ago. He goes for another big flying kick but Sterling avoids it and starts taking over on offense for the first time in the bout.

Ari suplexes Kushida on the top-rope and leaves him hanging as he bounces off the ropes for a somersault leg drop over the back of the champions neck. Sterling secures a unique submission on Kushida on the mat and the fans try and rally behind the NXT Cruiserweight Champion. Kushida elbows his way out of the hold and reverses it into a submission of his own.

After screaming out in pain, Sterling lets go and scoots back. He stands up but Kushida is fired up and making a comeback. He builds some momentum and is now taking back over control of the bout, taking it to Sterling with a wild flurry of offense. Sterling cuts his run of offense off with a beautiful stalled enzugiri kick after Kushida flipped and kicked off the ropes. We see highlights of this spot and then Sterling sits Kushida on the top-rope.

Kushida starts fighting back and looking for the hoover board lock up there. Sterling escapes and hits a running, flipping hurricanrana to take Kushida off the top the hard way. Sterling looks for a 450 splash of some kind but lands on his feet after Kushida moves. Kushida hits a nice dropkick and then locks in his arm submission. Sterling immediately taps and the champ lets go and pats him on the back before posing with his title as his theme plays and the fans cheer for him.

After the commentators run through some highlights of what was an excellent main event, we see Kushida finishing up his celebration in the ring as this week’s show goes off the air on that note. Thanks for joining us!