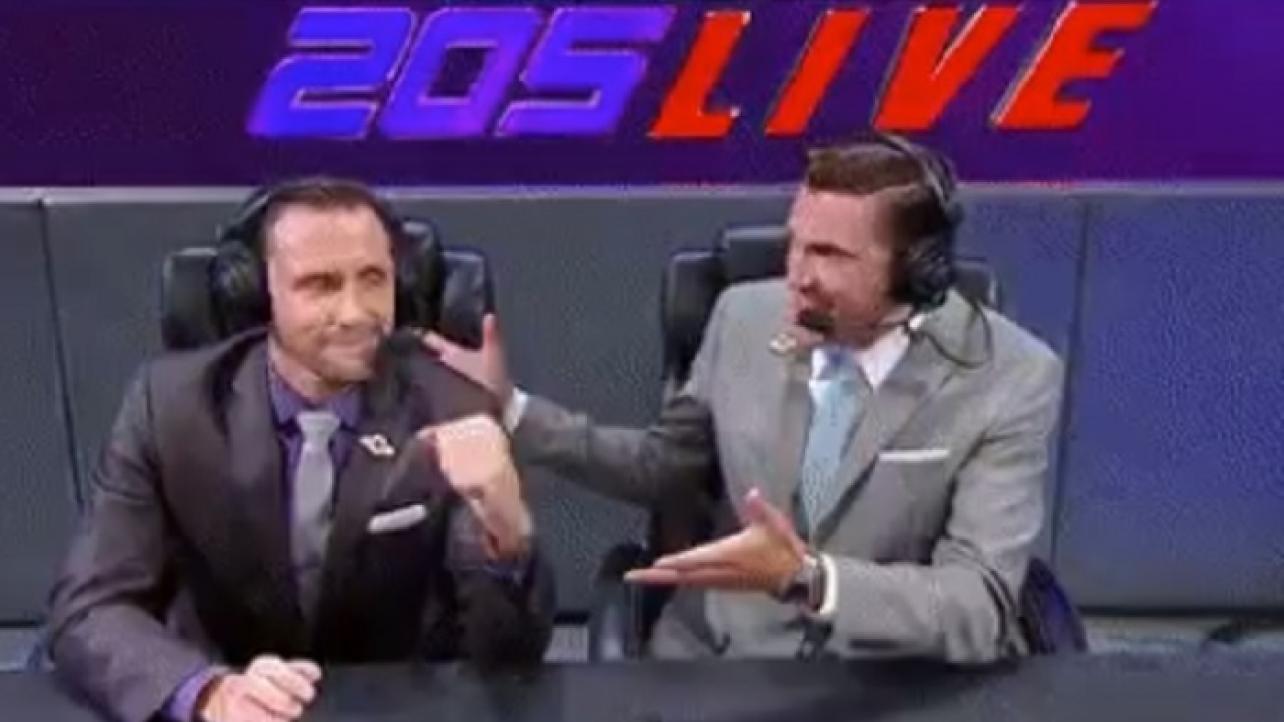 The WWE Cruiserweight division is back on display this evening with this week’s episode of the WWE’s purple brand program.

WWE 205 Live returns with a new episode on the WWE Network immediately following the conclusion of this week’s WWE Friday Night SmackDown Results (9/18/2020).

Headlining this week’s purple brand showcase of the Cruiserweight division on WWE 205 Live will be a rematch between “The Premier Athlete” Tony Nese and Danny Burch.

Additionally, the official WWE 205 Live preview at WWE.com notes that Ariya Daivari is in a good mood and because of such, he is introducing the “Daivari Dinero’s Division,” giving opportunities to “three deserving Cruiserweight competitors, facing each man one-on-one.” Anyone who can defeat Daivari will earn $10,000 of his own money.

Featured below are our WWE 205 Live results of the September 18, 2020 broadcast that streamed on the WWE Network.

The weekly video signature airs and we’re off and running with this week’s purple brand show, as WWE 205 Live is underway now on the WWE Network following the conclusion of this week’s WWE Friday Night SmackDown on FOX broadcast minutes ago.

We then shoot inside the Amway Center in Orlando, FL. where we see a jam-packed ThunderDome virtual live audience ready for this week’s Cruiserweight action.

From there, we head over to the announce desk where an elated Vic Joseph welcomes back Nigel McGuinness, who is taking the chair that has been commonly filled by Drew Gulak over the last several weeks on WWE 205 Live.

It’s time to head down to ringside, where our first of four scheduled matches for this week’s show is ready to get underway.

Ariya Daivari vs. Enhancement Wrestler No. 1 of 3

The man himself, Ariya Daivari is in the squared circle and his first victim, I mean enhancement talent opponent, is ready to take his squash match beating, I mean chance at making a name for himself in this serious competitive showdown.

Nevermind, just like that, this one is over and done with. Daivari trapped the enhancement talent in the corner of the ring and unloaded on him before hitting a big kick, locking him up in the “Tree of Woe” before running across the ring and blasting him with a dropkick while he was stuck in that position hanging upside down. He follows that up with a Hammerlock Lariat and that’s all she wrote, folks. 1-2-3 scores the pinfall victory for Daivari in a total squash match opening contest.

Ariya Daivari vs. Enhancement Wrestler No. 2 of 3

With Daivari still in the ring, the second enhancement talent runs down and is ready for what will likely be his turn in the hot chair.

Daivari takes it to the unnamed enhancement talent outside the ring before bringing him in moments later and blasting him with some chops that would make “The Nature Boy” himself proud. WOOOO!

The enhancement talent attempts a flying cross-body press off the top-rope, however Daivari avoids it and blasts him with the same Hammerlock Lariat that dusted off the previous opponent. 1-2-3 and another pinfall victory is under the belt of Daivari for this evening.

With two down, there is one to go. It’s time for Daivari’s promised third of three straight victims to take his place in the ring.

Jason Kane will be the third opponent, as his name is actually mentioned clearly enough to be caught on the broadcast as Joseph and McGuinness continue calling the action here for Daivari’s third straight contest.

The bell sounds and as soon as it does, Kane blasts Daivari with a clothesline. Daivari is caught off guard and wasn’t ready for that. Kane follows-up quickly with a running chop and as he tries a springboard move of some kind, Daivari avoids it and counters, taking Kane down with a uranagi for a nearfall.

This turns the offensive momentum back in the favor of Daivari, however only briefly, as while he decided to scold the official for what he felt was a slow count, Kane rolls him up and looked to possibly be stealing the third and final bout out from under Daivari at the last second.

We see some video highlights of action from the past weeks that led to tonight’s main event, which once again sees Tony Nese going one-on-one against Danny Burch in a featured singles showcase attraction match.

Some WWE Shop commercials and other ads play as well and then we head back in front of our jam-packed WWE ThunderDome audience, who all appear ready for this week’s purple brand main event here at the Amway Center in Orlando, FL.

It’s main event time, folks! “The Premier Athlete” is making his way down to the ring for his rematch in this week’s purple brand headline showcase against Danny Burch.

The two parties are in the ring, the bell sounds and here we go as our headline bout of the evening is now officially underway as the two lock-up in traditional collar-elbow tie-up fashion.

As these two settle into the action a bit, with each man having their respective offensive moments to shine, we see Ariya Daivari making his way down to the ringside area, where he proceeds to distract Burch.

Burch goes to meet up with Daivari, however “The Premier Athlete” blasts him from behind. Now he and Daivari look at each other momentarily before the action returns to the ring where Nese takes back over and starts unloading on Burch with a fired-up attack.

Things build with Nese putting together a nice string of offense which Burch appeared ready to stop and turn things into his favor until he climbed to the middle-rope and went flying off only for Nese to catch him with his jumping palm strike. Big headbutt leaves both guys laid out briefly.

As they start to fight back and pick up the pace a bit, Burch hits a middle-rope dropkick for a near fall. He follows up with a release-German suplex and a big clothesline. And another. He covers him, but only gets two on the pin attempt. Now the two guys fight out to the floor area at ringside.

Once the action resumes inside the ring, we see Nese going for a springboard moonsault but to no avail, as Burch avoided it and immediately capitalized by following up with a Crossface submission. Nese gets near the ropes to force the break, however Burch yanks him back to the middle of the ring. Finally, Nese does make it to the ropes and the hold is broken up.

Burch starts unloading with uppercuts until he throws one too many and Nese times one, catching him with a pump-handle driver. Burch was almost finished off before just barely kicking out in time. Nese misses a Running Nese attempt and the two guys crash through the ropes and out to the floor.

Now we see Burch and Daivari, who was still at ringside, arguing with each other. As this is going on, Burch throws Nese back into the ring, Daivari moves forward but Burch blasts him from the ring apron with a big super kick. Unfortunately, that allowed Nese time to set up a beautiful kick. He follows that up with a Running Nese that connects this time and he scores the 1-2-3 for the pinfall victory in our main event of the evening here on WWE 205 Live this week.

How The Show Goes Off The Air This Week

After scoring the pin, “The Premier Athlete” celebrates in the ring a bit while the announce team of Vic Joseph and Nigel McGuinness recap everything on commentary.

Meanwhile, we see Burch keeping his sights set on Daivari for playing such a costly role in the outcome of the match. The show goes off the air on that note.

Thanks for joining us here for your WWE 205 Live results coverage! Follow eWrestling reporter Matt Boone on Twitter for more WWE and AEW coverage @MattBoone1984.

What did YOU think of this week’s #WWE #205Live show featuring return of @McGuinnessNigel on commentary, 3 back-to-back matches from @AriyaDaivariWWE & @TonyNese vs. @strongstylebrit?