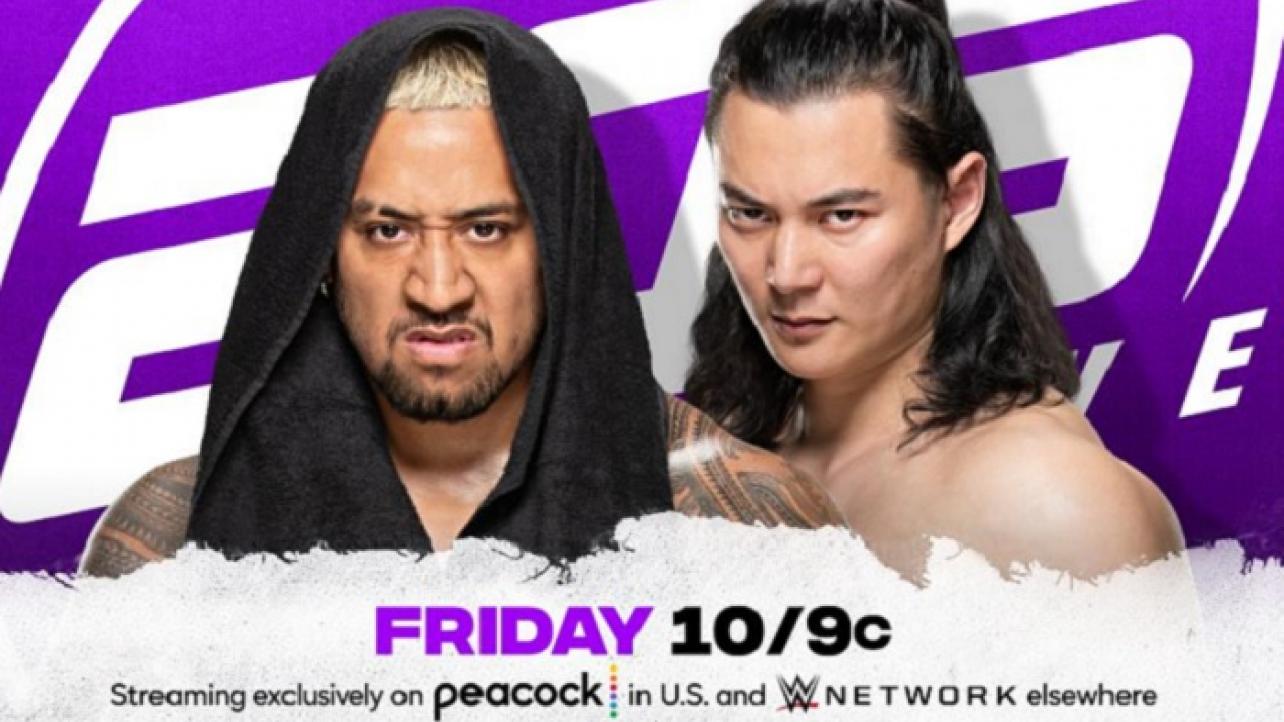 WWE 205 Live returns this evening on the WWE Network on Peacock.

On tap for tonight’s purple brand program, which emanates from the Little Caesars Arena in Detroit, Michigan, is Solo Sikoa vs. Ru Feng, Ivy Nile vs. Fallon Henley and Damon Kemp vs. Andre Chase.

Featured below are complete WWE 205 Live results from Friday, December 24, 2021.

This week’s show kicks off with the usual signature cold open video package and then we shoot inside the Capitol Wrestling Center where the commentary duo welcomes us to the show.

From there, we head down to the ring for our first of three advertised matches on tonight’s show. The entrance music plays for Ivy Nile, and out she comes accompanied by Malcolm Bivens. She settles inside the ring and her music dies down.

The theme music for Fallon Henley plays and she makes her way out with a ton of energy, stopping to do a little dance-step in front of Bivens, which got under his skin. She enters the ring and her music dies down.

We hear the bell and immediately Nile wipes the smile off of Henley’s face, grabbing her by the back of the head and slamming her down into the mat face-first. Henley pops up and sees Nile smirking at her. The two engage again and this time Henley takes Nile down. Nile reverses and the two end up back on their feet.

While standing, Henley amps up and she brings Nile down to the mat and goes for a cover, only getting two. They scramble back up and Nile gets behind Henley, scoops her up and sends her for a ride, dumping her on her head. We see an immediate replay of this as Nile continues to go to work on Henley.

The fans start to chant for Nile. She builds up a head of steam and runs across the ring, blasting Henley in the grill with a running boot. The commentators put her over for doing the same move on social media. Meanwhile, Henley starts to show signs of life and ends up fighting back into competitive form.

Henley takes over from there and gets her first real offense in the match, however it doesn’t last for long, as Nile takes Henley down with a ton of momentum. She transitions behind her and slaps on a match-ending one-arm choke/sleeper for the submission victory.

After the match we see some highlights of Nile’s key spots in the match and then we return live to see her doing a double biceps pose in the ring as Bivens stands by her side and the fans chant her name in the background.

We shoot over to the commentary position at ringside and see Joseph and McGuinness showing off their bad holiday sweater game. They show the official match graphic for our next bout of the evening, which will be Andre Chase vs. Damon Kemp and then they send us to a quick commercial break.

When we return from the break, we hear the theme for Andre Chase as he is in the middle of making his entrance to the ring. He settles in the ring as the fans boo in the background. From there, his music dies down.

Now we hear the sounds of the theme song for his opponent, as Damon Kemp emerges and heads down to the squared circle for our second of three matches here on this week’s purple brand program.

The bell sounds and we’re off-and-running with this one. Straight out of the gate we see Kemp take down Chase. Chase scrambles back to his feet but Kemp takes him down again with more authority and then controls him on the mat with quick hips and good position control.

Chase hits Kemper with the back of his head and it momentarily stuns the newcomer. He takes back over after that as the fans break out into a “Chase..you suck! Chase..you suck!” chant. Chase then works his way back to his feet, kicks away the hand of Kemper and gets in some big strikes in the corner of the ring.

From there, Chase settles into the offensive driver’s seat, as he takes over and begins working over Kemper with a prolonged beatdown. He puts the boots to him, leading the crowd in a “Give me a C!”, “Give me an H!” etc. chant. After that, Kemper begins showing signs of life, getting his first offense in since the beginning of the contest.

Kemper eventually fights his way out of the armlock and gets in some big kicks. He mixes in some punches and then hoists Chase up and dumps him down with a vengeance with a belly-to-belly suplex. He gets behind Chase again and from the corner of the ring hits another beautiful belly-to-belly suplex, this time landing in a near-fall that Chase kicks out of at the count of two.

Another loud “Chase..you suck!” chant breaks out in the crowd as Kemper and Chase are both slow to get up. When they do, it is Kemper who looks to pick up where he left off, however Chase ends up cutting him off and hitting his finisher. He goes for the cover and gets the three-count for the win.

Once the Chase-Kemper match wraps up, the commentary team of Joseph and McGuinness hype up our main event of the evening and then send us to another quick ad time-out.

We return from the break to the ring entrance of main event competitor Ru Feng. Feng makes his way down to the ring and settles in as his music fades down.

Now the theme hits to bring out his opponent for our third and final bout of the night, as Solo Sikoa’s music plays and he heads to the ring to a big reaction from the fans inside the CWC.

The bell sounds and our main event of this week’s 205 Live is now officially off-and-running. We see Sikoa go to work right off the bat, landing a nice combination of strikes. From there, Feng blasts him with a big shot and brings him down to the mat with authority.

After that, Sikoa mixes in some strikes again and just as it looks like he’s about to take over control of the offense, Feng fights back into the lead and grounds Sikoa, slapping a rear choke on him. He squeezes away, letting go only to blast Sikoa with some elbows to the collar bone just as it looked like he was about to escape.

He sinks the rear choke back in and squeezes away again until the crowd rallies behind Sikoa and he “Hulk’s up.” This leads to him getting back to his feet and escaping the clutches of his opponent. The fans break out into a “Sikoa’s gonna kill you! Sikoa’s gonna kill you!” chant, but he isn’t able to do much as Feng ends up grounding and controlling him once again.

Eventually Sikoa escapes and while selling his arm, he begins getting in his first offense since the start of the contest. He mixes in a wide-variety of strikes as he fully shifts the momentum in his favor now and takes over. He decks Feng, hits the ropes and drops down hard with a senton. He gets up and does the same thing over again — twice in a row. He goes for the cover after the third one, however Feng kicks out at two.

Sikoa continues to control the action from there, blasting Feng with a couple of big shots and going for the cover again, where again Feng kicks out at two. He ends up grounding Feng again and climbing to the top-rope. He leaps off and connects with a frog-splash. He goes for the cover after that, and this time he is able to finish Feng off and score the pin fall victory.

Once the match wraps up, the commentary duo of Joseph and McGuinness talk us through some match highlights, as we see some key replays from the main event. From there, they hype up the fact that Sikoa remains undefeated with tonight’s win, questioning what the New Year has in store for the impressive newcomer. That’s how this week’s show wraps up, as the 205 Live broadcast concludes here. Thanks for joining us and have a Merry Christmas and Happy Holidays!