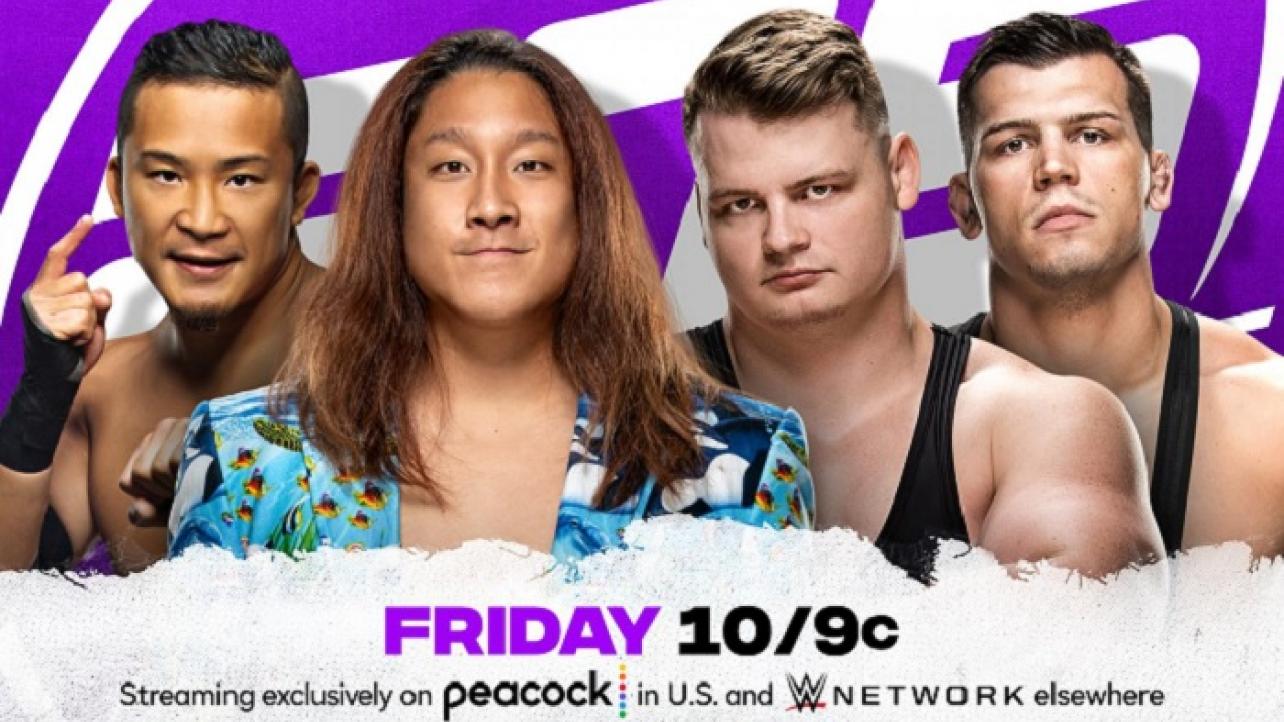 On tap for tonight’s show is Draco Anthony vs. Boa in one-on-one action, Ivy Nile will square off against Erica Yan in singles competition, and the main event will see Diamond Mine duo The Creed Brothers (Brutus & Julius Creed) taking on the team of Jacket Time (Ikemen Jiro & KUSHIDA).

Featured below are complete WWE 205 Live results from December 3, 2021.

The regular intro kicks off this week’s purple brand program and then we hear the sounds of our regular commentary duo, who is eventually shown on camera as tonight’s show is officially underway.

We hear the commentators talk about The Diamond Mine once again being strongly represented on tonight’s show, as multiple matches scheduled for this evening will feature the group being represented.

With that said, the first representative of The Diamond Mine makes her way down to the ring for the opening contest on the show, as Ivy Nile settles into the squared circle for one-on-one women’s action.

Nile will be squaring off against Erica Yan, who is also in the ring now. The bell sounds and we’re off-and-running with our first of three bouts scheduled for tonight’s show.

Early on, we see some back-and-forth action from Nile and Yan. Eventually, Nile proved early on that she had the strength-and-power advantage over Yan. She uses her strength to control Yan on the ground, as well as when they engage standing up.

Finally, Yan creates some separation with a quick pin attempt. This slows Nile down a bit and allows Yan to get in some offense of her own. It wasn’t long-lived for Yan, however, as Nile connects with a big step-up kick that decks Yan and leaves her laid out.

From there, Nile slaps a dragon sleeper on Yan in the middle of the ring. Yan tries holding on but it is eventually too much for her, as she ends up succumbing to the submission finisher from The Diamond Mine member, who picks up the impressive victory in what was a relatively one-sided match.

Now we get ready for our second of three advertised matches on tonight’s purple brand program, as we gear up for another one-on-one contest.

Draco Anthony and Boa make their respective ring entrances and settle into the squared circle prepared to do battle in our bridge match connecting our opening contest to our main event of the evening.

This will also be the only bout on the card tonight that doesn’t involve a member of The Diamond Mine on one side of the ring or the other. The bell sounds and now this one is officially off-and-running.

We see Draco pull ahead into the offensive lead in the early stages of this singles showdown, however he doesn’t connect with much of anything of significance before Boa fights back into competitive form and ultimately ends up taking over control of the action.

Boa lands a big back body-drop and then follows that up with a vicious display of a wide-variety of effective strikes before culminating the sequence with an impressive butterfly suplex. Once he gets Anthony down on the mat, Boa locks a nerve hold on him and controls him for a few moments.

Eventually, Draco starts to finally show some signs of life again, however not for long, as Boa snatches him up by the chin so hard that he falls down to the mat in pain. So much so, that the referee of the match ends up calling it and giving the victory to Boa. With the loss, Draco Anthony continues to look for his first victory since joining the mix on the 205 Live brand.

The Creed Brothers vs. Jacket Time

We head to another quick ad time-out before we get ready for our main event of the evening. When we return from the commercials, we hear the commentary duo get us prepared for our final bout of the show.

On that note, we see some more representatives of The Diamond Mine head down to the ring to try and finish this show up with a perfect 2-0 run in two matches with members of the group involved here this evening, as The Creed Brothers — Julius and Brutus Creed — are in the ring and ready to go.

Now we see the fan-favorite, fun-loving and positive-energy-filled duo known as Jacket Time make their way down to the ring for this featured tag-team contest. The team of Ikemen Jiro and KUSHIDA draw a respectable positive response from the fans inside the CWC as they settle into the ring.

The bell sounds and we’re off-and-running with our final attraction of the show, as the main event gets underway with Jiro and Creed kicking things off for their respective teams after a quick pre-match promo from The Creed Brothers where they vow to beat up anyone who crosses their path.

Early on, that’s exactly what we see Julius and Brutus do, as they make good on their words by dominating Jiro in the early goings. Jiro tags out and in comes KUSHIDA to try his luck against The Diamond Mine duo, however he doesn’t fare any better. The Creed Brothers double-team and beat him down as well, keeping control of the offense.

KUSHIDA takes some punishment from the duo for a bit before he finally buys himself enough time to get to his end of the ring and make the tag to Jiro. Jiro hits the ring and looks to be a whole different person now, as he and KUSHIDA hit some double-team offense that shifts the momentum to their favor for the first time tonight.

Jiro remains in control of the offense for a bit, however eventually Brutus hits the ring and he starts to take back over the action. He ends up launching Jiro over the ropes where he crashes and burns on the floor at ringside. Jiro is thrown back into the ring and now we watch as Brutus and Julius take turns rag-dolling Jiro around the squared circle for a few minutes.

We see an inverted bear slam shifted into a one-arm power bomb, similar to a crucifix bomb spot, lead to a close near fall for Brutus. After Jiro kicks out and keeps hope alive for the Jacket Time team, he makes it over to his neck of the woods in the ring where he makes the much-needed tag to bring KUSHIDA back into the mix.

KUSHIDA picks up where Jiro left off, adding to the momentum shift that he started before tagging out. KUSHIDA fares well for a bit but then Brutus and Julius take back over and start looking to finish this one off. Brutus ends up as the legal man for The Creed Brothers. He launches Julius off his shoulders into a big super-moonsault spot before following up himself with a standing moonsault splash for the pin fall victory.

That ends what was a pretty solid main event tag-team bout here this week on 205 Live. On that note, as The Creed Brothers celebrate their victory, pushing The Diamond Mine to 2-0 in two matches this evening, the commentary team talk us off the air. That’s how this one wraps up. Thanks for joining us!

.@DiamondMineWWE lays claim to #205Live TONIGHT on @peacockTV in the U.S. and @WWENetwork everywhere else! https://t.co/LlCkWbkVvB