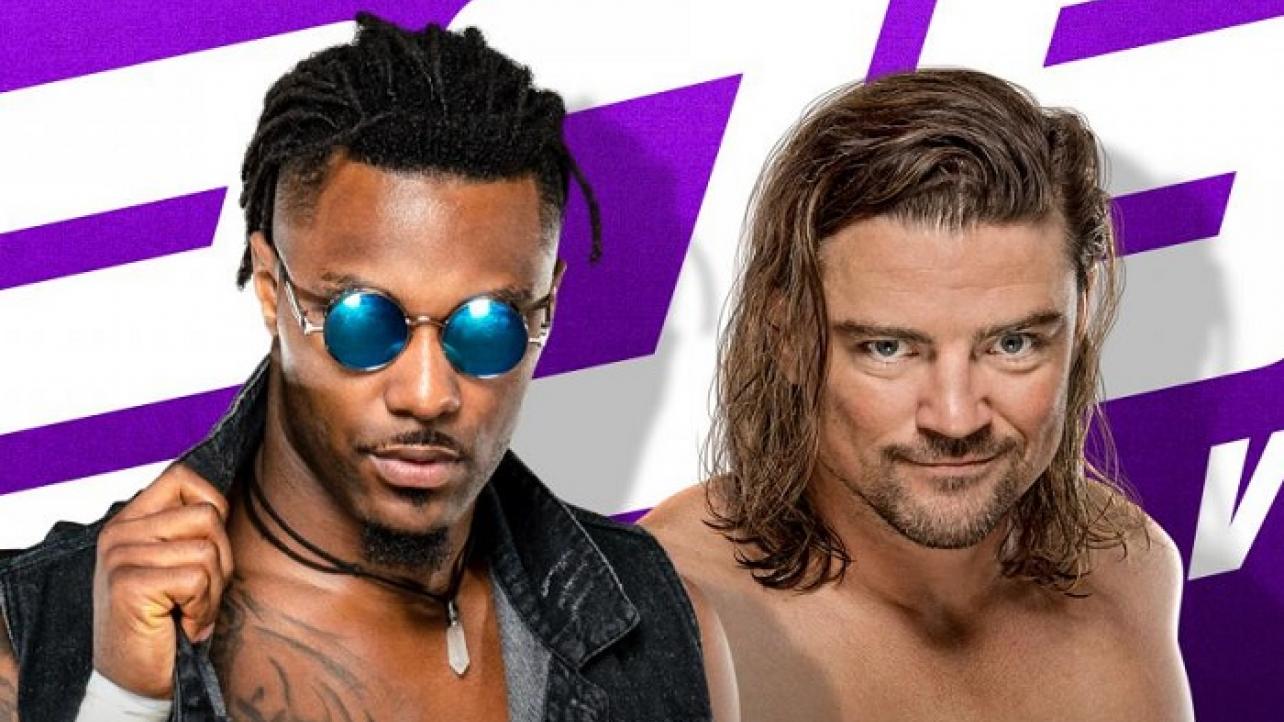 The purple brand is back with their 201st episode in show history, as WWE 205 Live returns tonight with the latest action from the WWE Cruiserweight division.

Featured below are complete WWE 205 Live results for the show that emanated from Orlando, Florida on Friday, October 16, 2020.

From there, we shoot inside the a jam-packed ThunderDome in Orlando, FL. as Vic Joseph welcomes us to the Capitol Wrestling Center.

Ariya Daivari’s music then hits the house speakers and out he comes carrying a briefcase containing $10,000 of his own money and a microphone.

He cuts a promo as he makes his way down to the squared circle, noting that the Daivari Dinero Division returns tonight, as he puts ten grand of his own cash on-the-line against two new WWE Performance Center recruits — Anthony Greene and Curt Stallion.

Now we see the ring entrance of a newcomer to the program, our first of two WWE PC recruits who will challenge Daivari this evening — Anthony Greene.

Greene makes his way to the ring and once inside, the bell sounds and he and Daivari lock up. Ariya muscles Greene into the corner and gives him a light tap on the cheek followed by a big smirk and some playful showboating. They lock up again and this time Greene fires away with chops off a break in the corner.

Daivari cuts his momentum short, knocking Greene down with a vicious chop before putting the boots to him as the fans boo and we see replays of a back-elbow that floored Greene moments ago. Nigel McGuinness talks about the ribs of Greene taking a beating as Daivari whips him into the corner and then grinds his head into the ring mat.

The Spike Dudley student Greene fires up on offense again, this time putting together a little offensive run that surprises Daivari. Just as Daivari seemed to turn the tables on Greene, we see Greene take him out with a big drop-kick. He goes to the top-rope for a high cross-body follow-up, however Daivari avoids it. He follows up with his hammer-lock lariat finisher for the 1-2-3.

As soon as he scores the pin, the theme music of his next opponent, the second of the two WWE PC recruits — Curt Stallion — plays and the newcomer to 205 Live slowly makes his way down to the ring.

He enters the ring and Daivari immediately goes to work on him, however within seconds we see Stallion hit a nice Lou Thesz press and some “Stone Cold”-style follow-up rapid-fire punches to a grounded Daivari.

Daivari now cuts Stallion’s momentum short and takes over the offensive control of the contest as the action spills out to the floor. Once on the floor, Daivari slams Stallion’s head against the announce table while yelling, “You want to take my money?!?”

Now Daivari rolls Stallion back in the ring and he hits a big splash off the top-rope and covers him, however the WWE PC recruit hangs on and kicks out at 2 1/2. Daivari gets a bit too comfortable with Stallion, as the newcomer rolls him up out of nowhere for a near fall. No dice. Seconds later he rolls him up with another modified pin attempt, but again, Daivari hangs on.

Stallion is now putting together a nice offensive run as he dominates the action outside the ring before rolling Daivari in with intentions on scoring the victory. Instead, Tony Nese runs down to the ring and hits his Running Nese finisher on Stallion, prompting the referee to immediately call for the bell.

Curt Stallion wins via disqualification due to the interference from “The Premier Athlete,” however Daivari grabs his briefcase and heads to the back while shouting “I said you have to win by pinfall or submission only!”

After a couple of quick commercials, we return inside the Capitol Wrestling Center where Nigel McGuinness and Vic Joseph get us ready for this week’s WWE 205 Live main event.

“I’m a man with a plan!” starts playing over the house speakers and out comes The Brian Kendrick. As he makes his way down to the ring, the announcers talk about him coming up short in his rematch against Ashante “Thee” Adonis.

With Kendrick settled into the ring now, the music fades down and the entrance theme of his opponent plays. Isaiah “Swerve” Scott makes his way down to the squared circle, while the announcers talk about him coming up short in his NXT Cruiserweight Championship contest against current title-holder Santos Escobar at the recent NXT TakeOver 31 special event.

The bell sounds and our WWE 205 Live main event for this week is officially underway. Kendrick has an all-business look on his face now as the two circle each other. Kendrick immediately takes Scott down and starts dominating him on the ground with superior mat-wrestling skills. He controls “Swerve” with various submission holds until the two work back up to a vertical base. Kendrick fires away at Scott with punches in the corner. Scott hits Rolling Thunder out of nowhere to turn the momentum in his favor. The announcers talk about Kendrick’s left elbow possibly taking the brunt of that, as the WWE veteran sells his arm afterwards. Scott now takes over the offensive control of the bout, as he now dominates Kendrick on the mat. Vic Joseph talks about Scott being known for his technical ability, complimenting him for his very good ground game in a division full of high-flying specialists.

Finally, Kendrick breaks free from the arm hold Scott had applied and after a few kicks, he manages to get back to his feet where he is met with some chops from Scott. Kendrick ducks a Scott follow-up move and hits a back-elbow. Scott times Kendrick’s follow-up move and springboards into a nice move, taking Kendrick down. He holds on to Kendrick’s arm afterwards, leading to Kendrick reversing the situation by yanking his own arm and sending Scott flying through the ropes and out to the floor. Kendrick slams Scott into the steel ring steps. Kendrick rolls back in the ring while Scott recovers on the floor and the referee begins his count.

Scott finally re-enters the ring and he immediately catches Kendrick coming in with a well-timed uppercut, however Kendrick responds back with a big shot that decks his opponent. He grabs onto the leg of Scott and is looking to set up something, however we never find out what as Scott kicks his way free and returns to his feet. Now he charges at Kendrick, who catches him coming in with a big kick, setting up a neck-breaker, which Nigel McGuinness compares to the old “Rude Awakening” finisher from the late, great “Ravishing” Rick Rude.

Kendrick is back in the driver’s seat now from an offensive point of view. He hangs Scott over the middle rope and hits another neck-breaker / inverted cutter, which the ropes helping deliver added punishment. Kendrick looks to set up Sliced Bread, however Scott has it well scouted and he avoids it, countering and taking over the offensive control of the match. He hits a follow-up suplex on Kendrick and then blasts him with a back-forearm when he slumps into the corner. Scott jumps off the middle turnbuckle and blasts Kendrick with a big shot. Scott picks Kendrick up, however Kendrick hip-throws him over his own shoulder, sending Scott through the ropes. Scott stays on the ring apron and back-body-drops Kendrick over the ropes and out to the floor. He kicks him in the jaw from the ring apron before going out to roll Kendrick back in the ring.

Upon returning to the ring himself, Scott leapfrogs over the top rope and rolls through — right into the Captain’s Hook from Kendrick. Kendrick cranks back on the submission hold with a vengeance as Scott screams out in pain. Kendrick ends up using the momentum of Scott to climb the ropes and he goes for Sliced Bread for a second time — this time hitting it. He immediately covers Scott, however Scott kicks out just before the referee can make it to the count of three.

Kendrick sets Scott on the top-rope and climbs up behind him, with Nigel McGuinness speculating that he could be looking for a super back-suplex off the top-rope. The two end up countering each other back-to-back, leading to nothing happening off the top as they end up back on the mat in the center of the ring. Scott hits a JML Driver and covers Kendrick. 1-2-3. It’s over. Isaiah “Swerve” Scott picks up the win in an excellent main event here on this week’s edition of WWE 205 Live.

After The Match: Swerve Insists On Good Sportsmanship From Kendrick

After the match, Scott’s music plays as he climbs to the middle rope to celebrate his victory in this week’s headline attraction while the announce team of Vic Joseph and Nigel McGuinness talk us through some highlights of the match.

Once we return from the replays and match-highlights, we see Scott watching as Kendrick returns to his feet. He extends his hand in a sign of good sportsmanship, however Kendrick isn’t interested in shaking it. He goes to exit the ring, however Scott tells him not to, saying “you’re better than that!” Finally, Kendrick does shake Scott’s hand. Now he exits the ring as Scott resumes his post-match celebration as this week’s installment of WWE 205 Live goes off the air.

Despite not being advertised for tonight’s #205Live, @TonyNese is here…and if he needs to make his presence felt, he will! pic.twitter.com/jhtyWCuaUG