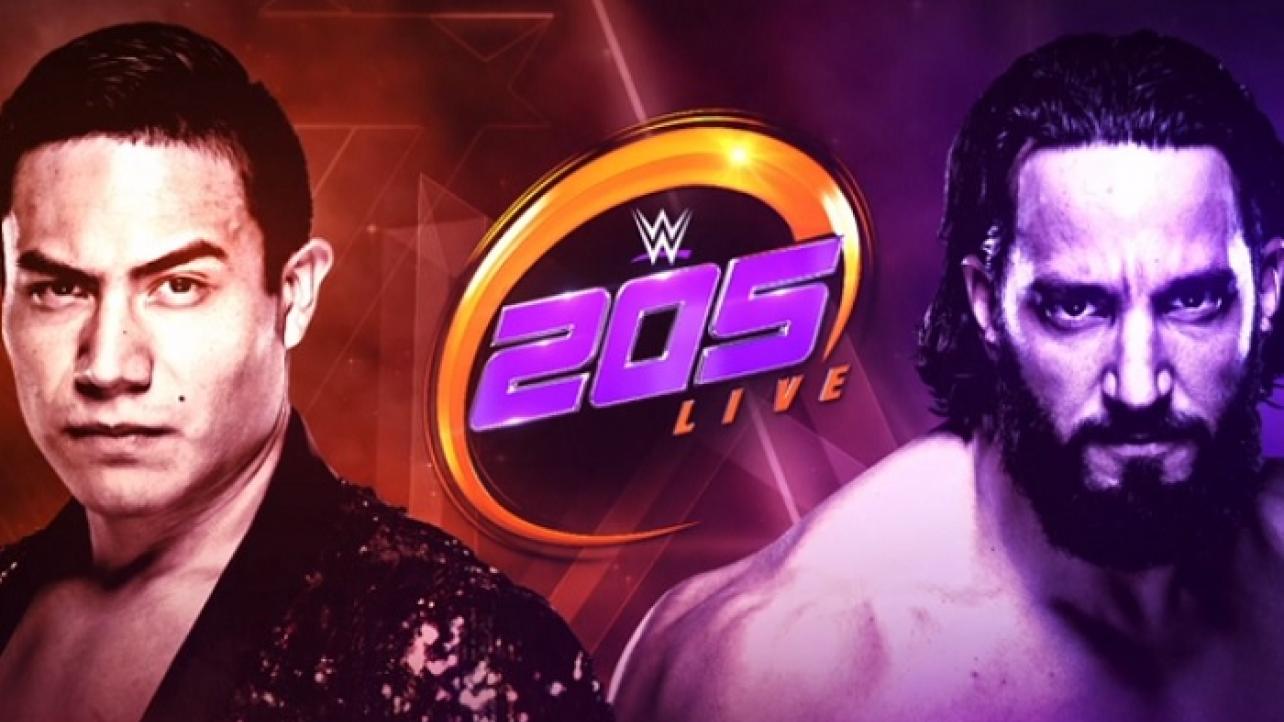 It’s time for some high-flying cruiserweight action with this week’s episode of WWE 205 Live on the WWE Network.

It’s time for this week’s purple brand program, as the WWE TLC 2020 “go-home” edition of WWE Friday Night SmackDown has wrapped up (Results Here) and now it’s time for some high-flying cruiserweight action on WWE 205 Live.

This week’s episode of “The Most Exciting Hour on Television” is scheduled to feature Jake Atlas going one-on-one against “The Premier Athlete” Tony Nese, as well as The Bollywood Boyz and Ever-Rise will compete in tag-team action in the third-and-final rubber match in their currently even series.

Featured below are complete WWE 205 Live results from Friday, December 18, 2020 at the ThunderDome II inside Tropicana Field in St. Petersburg, Florida.

The usual traditional weekly signature opening video package airs to kick off this week’s episode of WWE 205 Live. From there we shoot inside the ThunderDome inside of Tropicana Field in St. Petersburg, FL. as we hear Vic Joseph welcome us to the show.

After that, we hear the familiar sounds of the theme music of 205 Live tag-team standouts Ever-Rise — Matt Martel and Chase Parker. They make their way down to the ring as we hear Nigel McGuinness say his first words into the microphone on commentary.

They settle into the ring as we’re informed by the commentators that this will be a special Tornado Tag-Team Match, which means all four men are allowed inside the ring at all times. Now we are treated to the upbeat ring entrance of The Bollywood Boyz — Samir and Sunil Singh.

The bell sounds and all four men immediately collide in the center of the ring and start slugging it out. Two of the guys splinter off and head out to the floor outside the ring, where they continue duking it out. Meanwhile, the other pair continue battling inside the squared circle.

Now with one member of the Bollywood Boyz stuck recovering outside the ring, both members of Ever-Rise start pounding away on Singh in the ring as he struggles to survive by himself in this two-on-one situation. Martel and Parker hit a double-team bulldog on Singh for a nearfall.

We see the other member of the Bollywood Boyz join his brother in the ring to even up the numbers game, and almost immediately the Singh duo starts to take over the offensive momentum in the match. Moments later, one of the Bollywood Boyz are thrown to the floor, leaving the other by himself in the ring to duke it out with both members of Ever-Rise in this Tornado Tag-Team Match, where the rules permit the two-on-one beatdown.

Sunil fights back and throws Ever-Rise out to the floor. This allows Samir to hit the ring apron and leapfrog off the ropes with a moonsault that takes out all three guys on the floor, including his own brother and tag-team partner. The announcers talk about the newfound confidence in the Bollywood Boyz as the Singh’s are enjoying some time in the offensive driver’s seat in this week’s 205 Live opener.

With Sunil on the top rope with Parker, we see a big superplex spot. Samir follows that up with a top-rope splash for a near fall, which Martel leaps over to break up just in time. We see some replays of the superplex off the top-rope from moments ago as all the members of this match recover in the ring.

Back live we see Martel going back Singh. As this happens, Sunil hits Martel with a camera from the floor. This sets up a pin attempt, however Parker breaks it up just in time to keep Ever-Rise alive in this rubber match designed to give one of these teams a two-to-one record in this three-match series. Ever-Rise end up hitting a double-team spot in the corner to Singh, dropping him face-first on the turnbuckle for the pinfall victory.

After a pair of commercials during a quick break in between our two scheduled matches here on this week’s purple brand program, we head back live inside the ThunderDome inside Tropicana Field in St. Petersburg, FL., where we hear some familiar music.

With both men inside the ring, the bell sounds and we’re off-and-running with our main event of the week here on 205 Live. Early on we see both men fight back-and-forth, however after a minute or two, “The Premier Athlete” dumps Atlas out to the floor. He heads out after him and slams Atlas’ head off the announce table at ringside.

Nese rolls Atlas back into the ring, however when he re-enters the squared circle himself, Atlas is on his feet and waiting on him. Atlas takes over the offensive momentum in our second of two bouts on this week’s show, enjoying a couple of minutes in the offensive driver’s seat. Nese gets in a hope spot, but Atlas cuts him off and continues his offensive dominance.

Now we see Nese turn the tables, shifting the offensive momentum in the bout in his favor. He backs Atlas up into the corner of the ring and blasts him with some knife-edge chops. He hits a nice vertical suplex for a near fall. Nese now stalking his opponent, waiting for him to get up as he sits on the middle rope. He leaps off but Atlas catches him by the legs and is looking for a Boston Crab. Instead, he leans back with Nese’s legs and sends “The Premier Athlete” flying over his head into the ring post.

It doesn’t take long, however, before Nese turns the momentum right back into his favor, cutting Atlas off with a big elbow to the jaw of his opposition. Nese whips Atlas into the corner of the ring and follows him in with a thunderous clothesline. Now from the ring apron, Nese leaps to the middle rope in the ring and then hits a moonsault from there onto Atlas for a close near fall. Afterwards, we see some replays of that cool spot from Nese.

Nese slaps a sleeper-hold on Atlas. After fading for a bit, Atlas finally escapes and is now showing his first signs of life in the past several minutes. Atlas hits a nice snap-German suplex on Nese. When Nese gets up, Atlas clotheslines him right back down with authority, turning “The Premier Athlete” inside-out in the process. Atlas with a nice rolling elbow into the jaw of Nese. Now he heads to the top-rope, however Nese pops up and stops him. He gets Atlas across his shoulders from the top-rope in a torture rack position, however Atlas escapes and rolls Nese up.

After we see a spot that has Atlas out of it on the floor outside the ring, Nese re-enters the ring and the referee continues his count. Atlas just barely makes it back into the ring at the count of nine and a half. From there, Nese goes out to the floor near the announce table and gets the referee’s attention by grabbing a foreign object.

While distracting the ref on that side of the ring, we see Ariya Daivari hit a sneak attack on Atlas from the other side of the ring near the entrance ramp. After getting in some cheap shots on Atlas, Nese re-enters the ring on the top-rope, hitting a 450-splash on Atlas. He connects and covers him, yet somehow Atlas managed to get his foot on the bottom rope to break the count just in time.

Moments later, Atlas hits his cartwheel DDT finisher on Nese off the top-rope and scores the pinfall, picking up the victory over “The Premier Athlete” yet again. We see Daivari slamming his hands on the ring apron from the floor at ringside out of frustration. Atlas’ music plays while he celebrates the victory in the ring, and Nese exits, retreating up the entrance aisle with Daivari looking upset and dejected while the commentators talk us through some highlights from the match.

And that’ll do it for this week’s purple brand program. Thanks for joining us here this evening for our live WWE 205 Live results coverage.