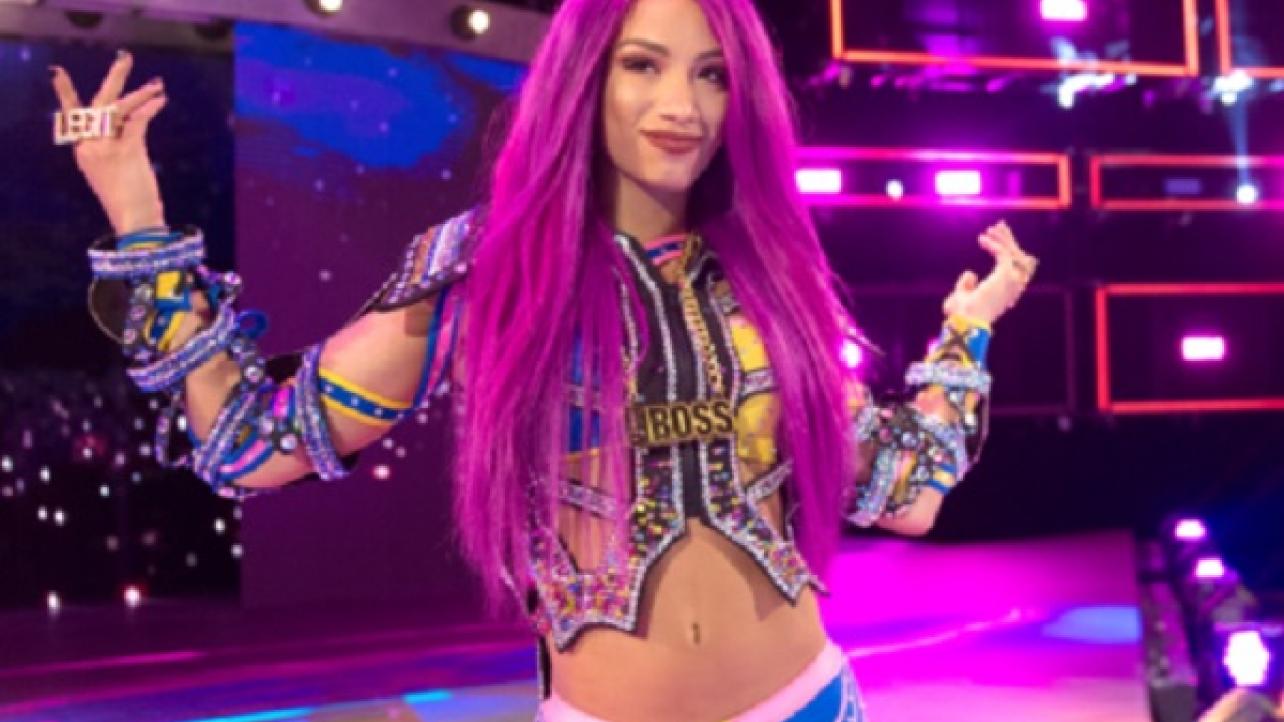 As noted, WWE ran an event at the Zayed Sports City International Tennis Stadium in Abu Dhabi on Thursday, making history as the first ever show to feature a women’s match in the United Arab Emirates as Alexa Bliss defeated Sasha Banks in the co-main event of the show.

Featured below are complete results of the show, courtesy of Simon Brady and F4WOnline.com.

The show opened with a Kurt Angle introduction video, with the crowd joining in with his “It’s true, it’s damn true” saying.

Balor came out first and got a big pop. He did the “Too Sweet” a lot and the crowd responded to him. The audience reacted to Wyatt’s entrance by doing the firefly lights, but there wasn’t much noise for him. Wyatt went to leave up the ramp early on, with Balor doing a short promo saying Wyatt is going to come back or Balor is going to go get him.

Balor countered the Sister Abigail into the slingblade, then hit a dropkick in the corner and the Coup de Grace to win.

– The WWE Arabia hosts came out, but they got almost no reaction until they started speaking Arabic.

Amore got a good reaction for his sing-a-long bit. He then cut an anti-Abu Dhabi promo about how he’s the best athlete to ever come to the city. He did the “S-A-W-F-T” chant, with the crowd finishing it for him and Amore saying he’s the only one allowed to say it because he invented it.

Kalisto got a lot of “Lucha” chants when he called for them. Amore played the cowardly heel. though the match was kind of boring. He retained by using underhanded tactics.

Elias got cheers for playing the guitar and mentioning how beautiful Abu Dhabi is at first, drawing an “Abu Dhabi” chant. He then got nuclear heel heat for his anti-Abu Dhabi song.

Jordan didn’t get much reaction, but his big moves kind of got the crowd going. He sold his storyline knee injury a lot and won with an inside cradle. He limped his way up the ramp after taking selfies with fans.

Most people seemed surprised by Kane’s presence when he came out. Strowman got decent cheers and lots of crowd participation for his roars. Strowman had the upper hand until Kane threw him into the steps on the outside. Kane teased hitting him with the steps, but he instead got out a table and set it up. Kane was later disqualified on the outside as he used a chair on Strowman when he was coming through the ropes.

Kane hit a couple more chair shots and went for a chokeslam through the table until Strowman turned it into a powerslam through it. Strowman played babyface, doing the volume test of which side of the crowd to throw his shirt to.

– Shadia Bseiso, who recently became the first Arab woman to sign a WWE contract, was brought out during intermission. A man from Kuwait appeared as well and they talked to the crowd in English and Arabic. A short video package about Bseiso’s journey played before the show and during intermission.

Crews got the most cheers at ringside, The Miztourage got a decent reaction, and Gallows and Anderson got “Two Sweet” signs thrown up at them. Axel was selling and wearing a neck brace like he’s been doing on television. He got an “Axelmania” chant after doing that gimmick in Abu Dhabi a couple of years ago. Axel and Dallas did a funny gimmick where they swapped the neck brace.

The match was decent, with Crews taking the beating for much of it. Gallows did a Stone Cold Stunner, including doing some theatrics when kicking the person he gave it to out of the ring after. O’Neil grabbed a small child on his way up the ramp and took a photo with them.

There was a huge pop for the announcement of this women’s match, which was WWE’s first-ever one in the UAE. People rushed to ringside and a ton of cameras were taken out. There was a video camera at ringside for only this match. Both wrestlers were wearing full bodysuits.

Banks was super over with all sections of the crowd, getting more cheers and chants of her name than anyone on the card prior to this. She got most of the offense in the match, but Bliss retained with a roll-up while using her feet on the ropes for leverage.

Banks got emotional when discussing the moment in a backstage interview after the match.

This was an awesome match with great comedy and action. The audience sang along with Joe’s theme song, told Sheamus he looks stupid, and practically rushed The Shield when they entered through the crowd. There were “This is Awesome” chants before the match even started. The crowd chanted and sang happy birthday for Ambrose since today was his birthday. Reigns displayed a lot of personality on the apron and got a lot of chants from kids in the audience.

Joe pummeled Ambrose so much that Ambrose took a swing with a punch, missed, and spun around and fell over. Rollins and Reigns both found that hilarious. Reigns was more serious in the ring, but Rollins looked like he was having fun throughout. There was another funny spot where Cesaro and Sheamus got into it with the short referee and the ref climbed to the second rope to shout at Cesaro.

The crowd was hot throughout and this was definitely the best match of the night, with it getting the longest sustained period of noise I’ve heard at the last three years of WWE shows in Abu Dhabi. The Shield ended up winning with a triple powerbomb on Cesaro.

Triple H came out after the match, getting in the ring and squaring up to Reigns. He got on the mic to say that he didn’t fly halfway around the world for nothing and told Reigns he’s taking the Intercontinental Championship when they face off at tomorrow’s show. Reigns said he’s flown halfway around the world, and it’s still Reigns’ yard. Cesaro & Sheamus vs. Rollins & Ambrose was also announced for tomorrow.