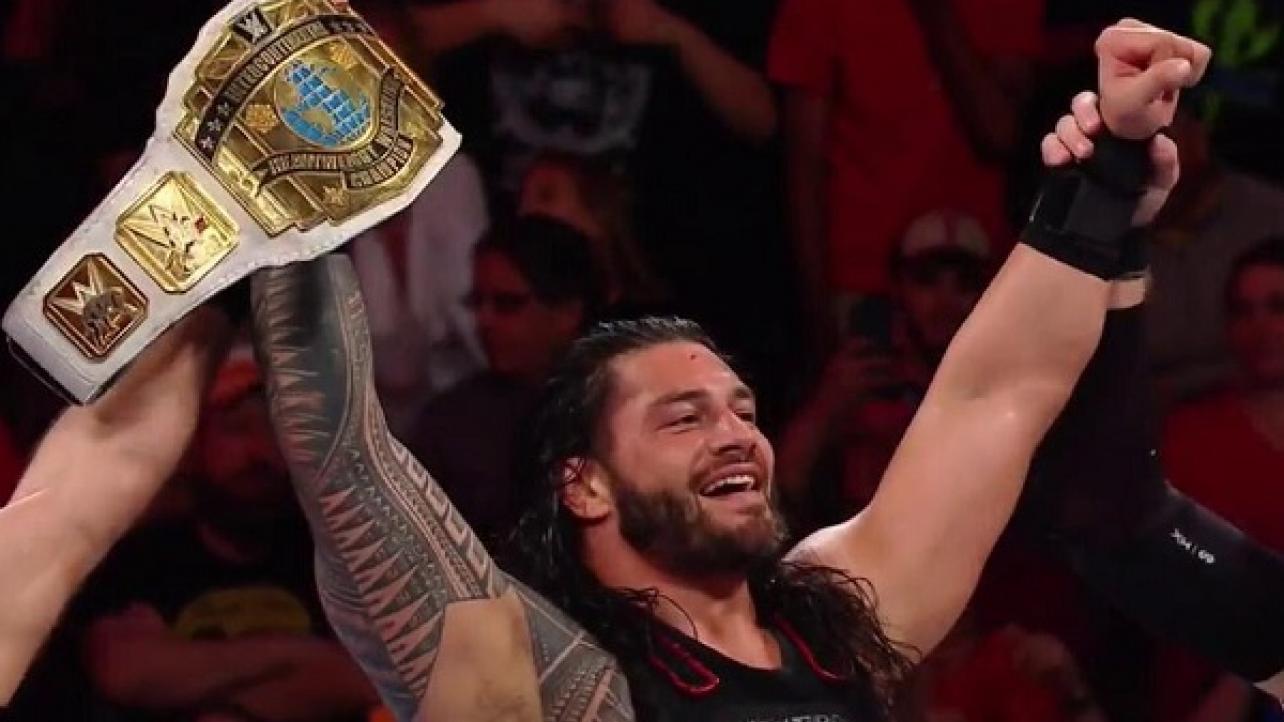 As noted, WWE ran a Supershow live event in Abu Dhabi on Friday featuring Triple H vs. Roman Reigns in the main event.

Featured below are complete results of the WWE live event in Abu Dhabi on December 8th. Results are courtesy of TheNational.ae.

Quick paced opener in which both men had moments in the ascendancy. Balor gets the pin the Coup de Grace and then tells the fans afterwards how much he has enjoyed his first time wrestling in Abu Dhabi.

Jordan, unlike on the Thursday night, sells his knee injury he is supposed to be carrying on TV programming a lot less and he prevails over Dallas in a short match, with Dallas being helped to the back by Curtis Axel afterwards.

All three men get good pops from the crowd. Both Kane and Wyatt take turns beating down Strowman, but it is Strowman who comes out on top in the end. Wyatt tries to use a chair on him, but Strowman reverses it into a slam for the 1-2-3.

After a short break as the cage is put together, the first WWE cage match in Abu Dhabi is on.

Both Sheamus and Ambrose escape the cage early and Rollins looks to be in charge after using a kendo stick on Cesaro.

But Rollins is blocked from climbing the cage by Sheamus, and the distraction allows Cesaro to climb the cage on the other side of the ring and beat Rollins to the floor.

Elias then proves a lot of fun as he has the crowd in the palm of his hand with some singing. He introduces Karl Anderson and Luke Gallows for the next match.

Short tag match where everyone has a moment to shine. Once again it is Crews who impresses the most with his power moves, and he gets the pinfall victory for his team.

Amore gets a decent welcome until he insults Abu Dhabi. After a slow start, where both men exchange dance moves, it is Amore who prevails as he wins with a pin using his feet on the ropes.

Main event time. Both men get big pops on the way to the ring, with Triple H edging the popularity contest early on as the 14-time champion made his first appearance competing in the UAE.

After a slow start the action hots up and both men have nearfalls, with Triple H kicking out of the Superman punch.

But after Reigns powers out of a pedigree attempt he gets the spear on his opponent to win.

Post-match, Reigns is attacked by Sheamus, Cesaro and Samoa Joe. Triple H looks as if he will align them but then attacks the trio to defend Reigns.

Triple H is also out-numbered, but Ambrose and Rollins come out to fight the trio off, and they with their Shield brother Reigns give a triple powerbomb to Sheamus.

Reigns and Triple H then shake hands to send the crowd home happy and include the WWE’s fifth visit to the UAE since 2012.

The action at #WWEAbuDhabi ends in a handshake between #RomanReigns and #TripleH after a fun match goes the way of the big dog. #UAE pic.twitter.com/c6l8YVNVfc