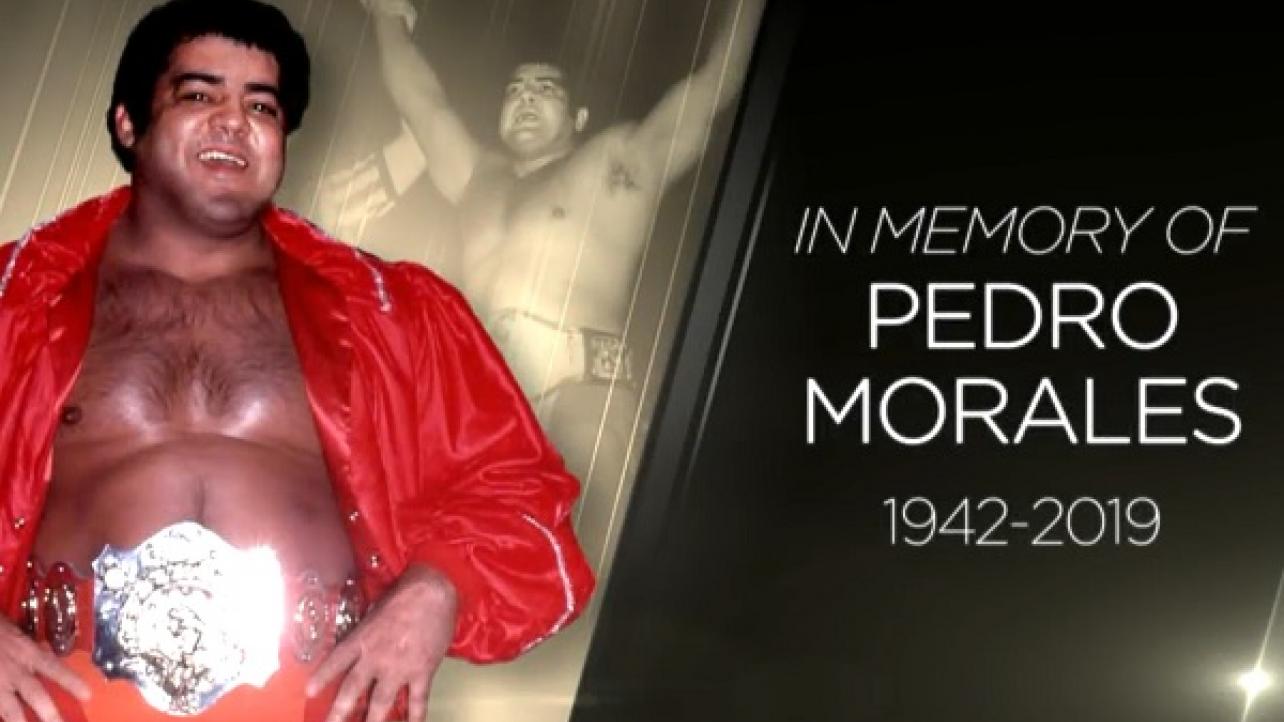 As noted, WWE Hall Of Famer Pedro Morales passed away at age 76 this week. The news was announced by WWE online on Tuesday and acknowledged on television during the WWE Elimination Chamber 2019 pay-per-view “go-home” edition of WWE SmackDown Live this week.

WWE is going with the narrative that Morales was the first-ever Triple Crown Champion in history, as he won every major championship that the promotion, known as the World Wide Wrestling Federation (WWWF) at the time, had to offer in the 1980s.

WWE is saddened to learn that WWE Hall of Famer Pedro Morales has passed away at age 76. https://t.co/NYzYOthrQL

Morales won the World Championship in 1971 and had nearly a three-year reign as the top dog in the company until ultimately dropping the title in 1973. He was also two-time Intercontinental Champion and in 1980, he was one-half of the World Tag-Team Champions alongside fellow former World Champion and eventual WWE Hall Of Famer, Bob Backlund.

Morales continued working for the company when it was taken over by Vince McMahon Jr., serving as a mid-card Superstar as the promotion became a national conglomerate, until retiring from in-ring action in 1987. He would go on to become a Spanish announce team member for both WWE and World Championship Wrestling (WCW), and would eventually take his rightful place as an inductee in the 1995 class of the WWE Hall Of Fame (see his induction video package above).

Check out the tribute video package that WWE aired on television, and subsequently online via their various social media channels, at the bottom of this page.

For those who missed it, featured below is the official WWE.com story on the passing of the pro wrestling legend.

WWE is saddened to learn WWE Hall of Famer Pedro Morales has passed away at age 78.

A native of Culebra Island, Puerto Rico, Morales moved to New York in his youth and debuted in the ring in 1959 at age 17. After establishing his reputation as a fiery competitor in WWE on the east coast, Morales traveled west to territories in Texas and California, where he competed for much of the 1960s. In California, he battled The Destroyer in a famous rivalry, and formed a popular tag team with Pepper Gomez.

Morales returned to WWE in 1970, and in less than a year, he captured the WWE Championship from Ivan Koloff inside Madison Square Garden. During his nearly three years on top, Morales developed a passionate following in the northeast, particularly among New York City’s growing Hispanic population.

More than 22,000 fans turned out to Shea Stadium in 1972 to watch him battle close friend and former champion Bruno Sammartino in the main event of the inaugural Showdown at Shea supercard. After 75 minutes of action, the bout was ruled a draw in accordance with the state athletic commission’s strict 11 p.m. curfew.

He held the WWE Title for a staggering 1027 days before losing it to Stan Stasiak in December 1973. Morales puts his name in the record books again in 1980 when he won the World Tag Team Titles with Bob Backlund and then the Intercontinental Title to become the first Triple Crown Champion in WWE history.

Morales hung up his boots in 1987 but continued on as an ambassador for sports-entertainment. He later became a commentator for both WCW and WWE’s Spanish announce teams, and in 1995, he was inducted into the WWE Hall of Fame.
WWE extends its condolences to Morales’ family, friends and fans.