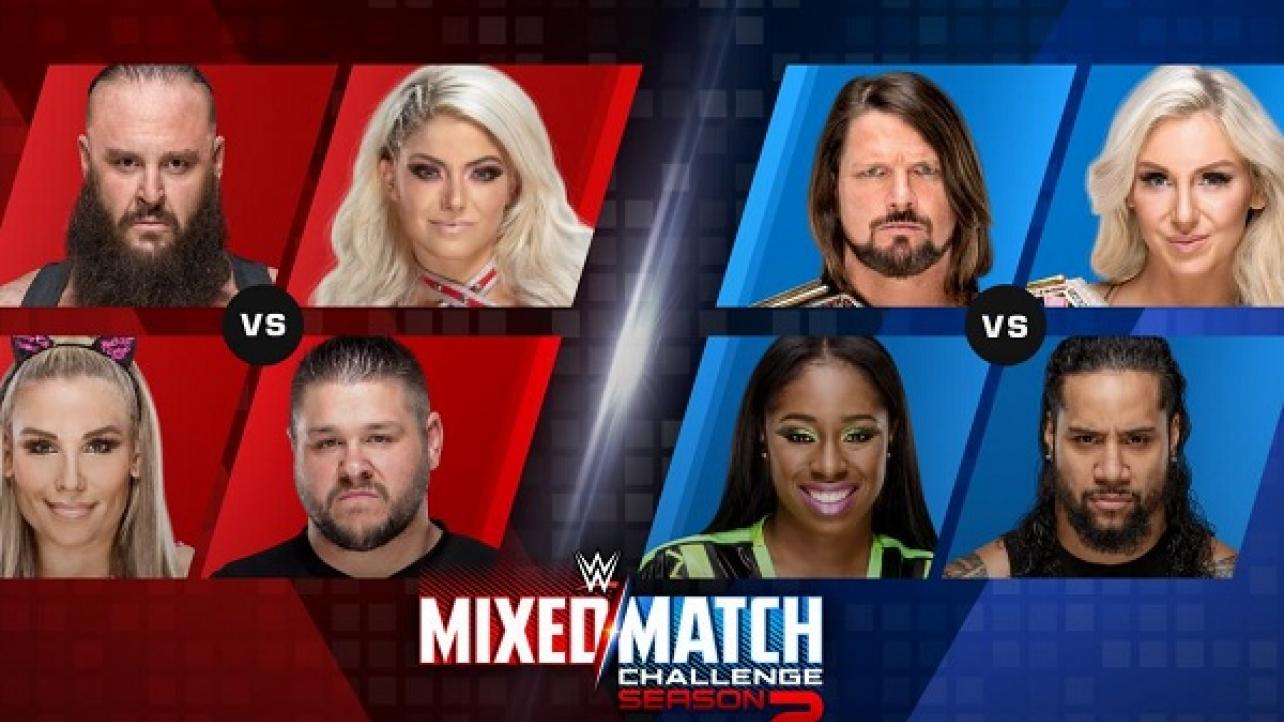 This weekend, WWE announced the first two matches for the second season of their Mixed Match Challenge series.

Starting off season two of WWE MMC will be Braun Strowman and Alexa Bliss vs. Kevin Owens and Natalya, as well as A.J. Styles and Charlotte Flair vs. Jimmy Uso and Naomi.

Strowman & Bliss vs. Owens & Natalya and Styles & Flair vs. Uso & Naomi in the first week of WWE MMC: Season 2

Last season, Strowman & Bliss were absolutely dominant as a mixed match tandem, an incredible combination of viciousness, intensity and confidence that stood as a favorite to win the entire tournament from day one. After ultimately falling short on that goal by losing to eventual tournament winners The Miz & Asuka in the Semifinals, they will now be on a mission to make sure no one ever stops them again.

In their way stands the formidable force that is Kevin Owens & Natalya. Though the unlikely duo comes together from very different in-ring philosophies, no one can deny their potential for greatness if they can get on the same page. Moreover, while both have had their problems with their respective opponents in recent months, the ability and nefarious nature KO mixed with the talent and experience the third-generation Queen of Harts may prove to be the perfect combination to overcome Team Little Big.

Of all the newly-formed teams grabbing the attention of the WWE Universe, perhaps no team in WWE MMC emerge with such high expectations on their backs as WWE Champion AJ Styles & SmackDown Women’s Champion Charlotte Flair. Last season, The Queen reached the Finals of the inaugural MMC alongside Bobby Roode. Now that she has The Phenomenal One watching her back, the premier titleholders of SmackDown LIVE might just be unstoppable.

Not if the team of Jimmy Uso & Naomi have anything to say about it, however. Although they fell short against Team Little Big in the Quarterfinals last season, Jimmy & Naomi’s biggest single advantage that this explosive duo has heading back into the tournament remains the same. While most of the other teams need to build a relationship to coexist, their status as a married couple assures that that chemistry is already in place. Add to that the fact that Uso is battled-tested as a tag team specialist, a five-time Tag Team Champion overall, and Naomi is a two-time SmackDown Women’s Champion, and you just may have the team that can defeat the seemingly undefeatable.

An exciting new season of WWE Mixed Match Challenge will stream live in the United States and for the first time in Germany, Mexico, Australia, France, Indonesia, Philippines, Spain, Thailand and Vietnam. The 14-episode series will air on Facebook Watch and feature WWE Superstars from Raw and SmackDown LIVE competing in a round robin-style elimination tournament in which all teams will face each other, with each match following traditional Mixed Tag Team Match rules: When tagged, male Superstars face off with the opposing team’s male competitor, and female Superstars battle fellow female competitors.

Find out which teams will be victorious when the ground-breaking WWE Mixed Match Challenge tournament returns, streaming LIVE exclusively on Facebook Watch immediately after SmackDown LIVE, Tuesday, Sept. 18, at 10 ET/7 PT, with a special WWE MMC Pre-Show at 9:50 ET.