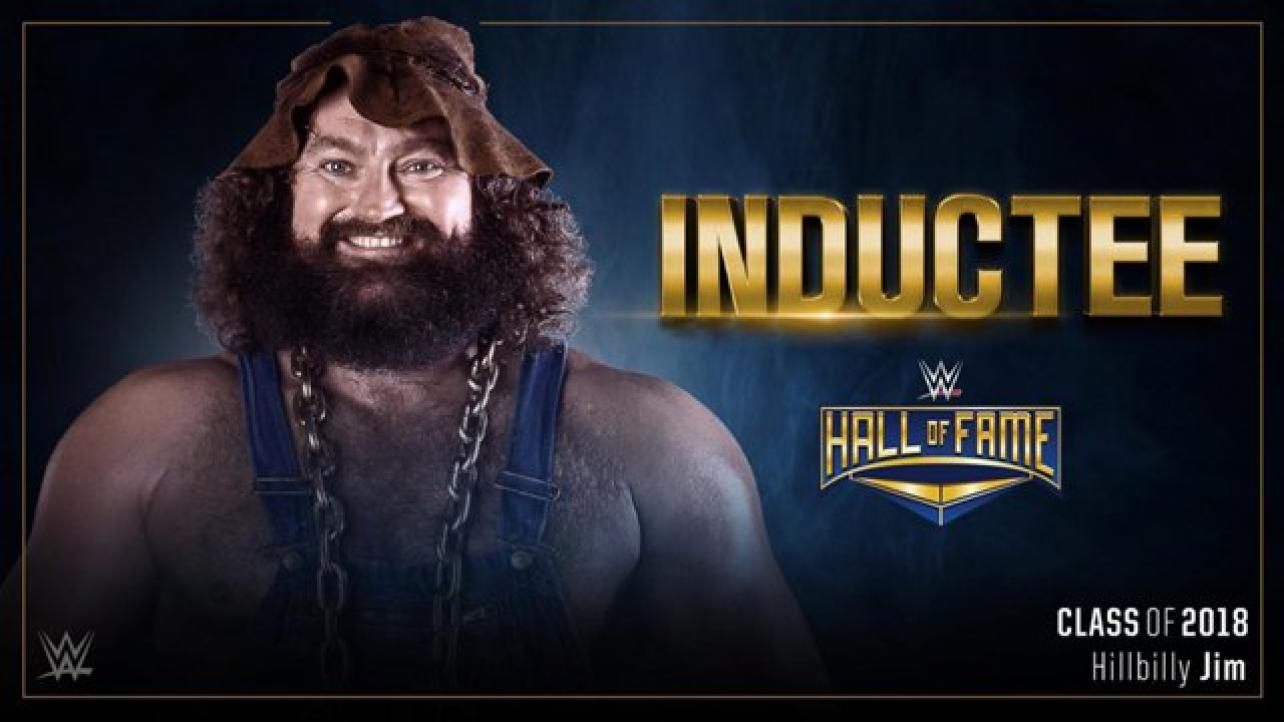 On Monday afternoon, WWE announced the latest inductee for the 2018 class of the WWE Hall Of Fame.

As rumored, former WWE Superstar Hillbilly Jim was announced as the latest inductee to the WWE Hall Of Fame.

Hillbilly Jim was a country boy plucked from the WWE Universe to be a Superstar. Now, he’s going to be a WWE Hall of Famer.

As first reported by Bleacher Report, Mudlick, Ky.’s favorite son is the latest inductee in the WWE Hall of Fame’s Class of 2018. Hillbilly Jim joins Goldberg, The Dudley Boyz, Ivory, Jeff Jarrett and Warrior Award recipient Jarrius “JJ” Robertson on the list of those who will be honored on Friday, April 6, in New Orleans during WrestleMania 34 Week.

The big country boy first popped up in WWE in late 1984, as a big, smiling bearded face towering above WWE fans around the country. However, Jim decided to get a little closer to the action when Hulk Hogan was attacked by Ken Patera, Big John Studd and Bobby “The Brain” Heenan. Leaping over the barricade, Hillbilly Jim jumped in the ring and helped The Hulkster run off the villains. Hogan saw something in the rugged man standing beside him and trained Jim for the ring.

Opting to compete in his overalls and entering the ring with a lucky horseshoe around his neck, Hillbilly Jim proved to be a prodigy inside the squared circle, using his incredible power to squeeze opponents into submission with his trademark bear hug. Though an injury sidelined him early in his WWE career, that did not stop Jim from introducing the WWE Universe to his extended family – Uncle Elmer, Cousin Junior and Cousin Luke – a trio of happy-go-lucky hillbillies that put smiles on the faces of fans around the world with their antics in the ring.

When he recovered, Jim jumped back in the ring and picked up where he left off, this time with his family in his corner. Hillbilly Jim also embraced WWE’s smaller competitors, competing in a Six-Person Tag Team Match on The Grandest Stage of Them All, WrestleMania III. The match featured one of the more infamous moments in WWE history, with one of Jim’s partners, Little Beaver, being splashed by the humongous King Kong Bundy in front of 93,173 people.

Hillbilly Jim continued competing in WWE through 1990 before stepping away from the squared circle. He continued to work with WWE throughout the 90s, co-hosting Prime Time Wrestling and managing his cousins, Henry and Phineas Godwinn, to the World Tag Team Championship. Jim returned to the ring for the Gimmick Battle Royal at WrestleMania X-Seven and showed a different side of himself on the hit WWE Network reality show, “Legends House,” in 2014.

Because of his lasting legacy as a beloved favorite of the WWE Universe, there is no better nominee for induction into the WWE Hall of Fame than Hillbilly Jim.

The 2018 WWE Hall of Fame Induction Ceremony takes place on Friday, April 6, in New Orleans at the Smoothie King Center during WrestleMania 34 Week. Tickets are available now on Ticketmaster.