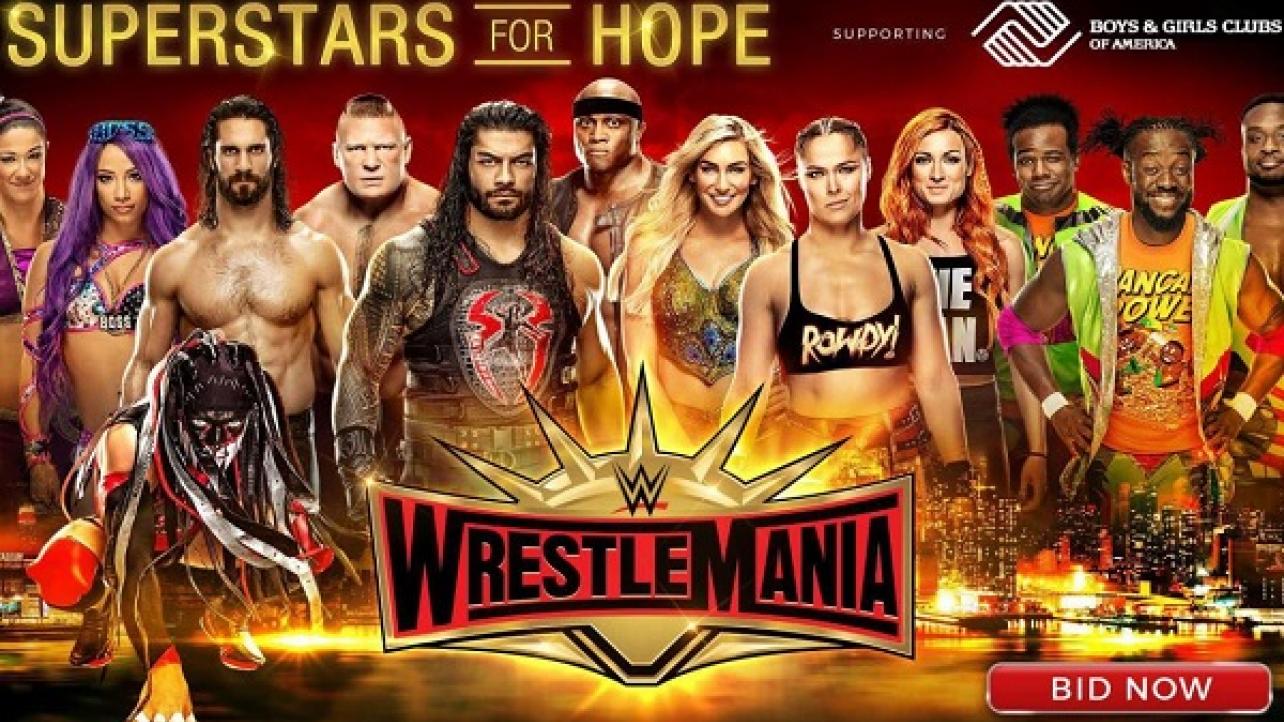 In addition to confirming that a women’s match will be the main event of WrestleMania for the first time ever when the RAW Women’s Championship Triple-Threat Match headlines WrestleMania 35 next month.

WWE has announced the launch of this year’s Superstars for Hope campaign, a global online auction on Charitybuzz.com, featuring unique, once-in-a-lifetime experiences to benefit Boys & Girls Clubs of America.

From now until Tuesday, April 9, fans can visit charitybuzz.com/wwe to bid on exclusive WWE experiences with Mr. McMahon, Hulk Hogan and Becky Lynch, as well as backstage opportunities at Survivor Series, WrestleMania and more. Additional experiences have been donated by CC Sabathia, Evander Holyfield and more.

“WWE is dedicated to using the power of our brand and platforms to leave a lasting, positive impression on our youth,” said Stephanie McMahon, WWE Chief Brand Officer. “We are proud to once again partner with Boys & Girls Clubs of America during the Superstars for Hope campaign to continue their efforts to help put young people on the path to great futures.”

“WWE continues to provide memorable experiences for our kids and teens while teaching them to be kind and have respect for others,” says Jim Clark, president & CEO, Boys & Girls Clubs of America. “The Superstars for Hope Fundraiser has become very beneficial for our youth. With WWE’s support, kids and teens will have the tools and skills to eradicate bullying in their communities.”

“Charitybuzz is grateful to continue our longstanding partnership with WWE and help bring their Superstars of Hope campaign to life,” said Charitybuzz President Ben Erwin. “WWE truly embraces the opportunities within the Charitybuzz platform, is so committed to their non-profit partners, and is overall a genuinely philanthropic organization. We’re honored to work with a company that not only believes in leveraging their business for good, but that does just that on a consistent basis.”

For more than seven years, WWE and Charitybuzz have worked together to raise nearly two million dollars for various nonprofit organizations.

The online auction highlights include:

#WWE has announced the launch of this year’s Superstars for Hope campaign featuring once-in-a-lifetime experiences to benefit Boys & Girls Clubs of America. https://t.co/5knN2r62Dg

Meet @StephMcMahon. Tour the Belle Radici vineyard with @BellaTwins. Have @BeckyLynchWWE take over your Twitter for a day! Now is your chance to bid on exclusive experiences benefitting the @BGCA_Clubs! https://t.co/mDyPFftDla pic.twitter.com/phTfCKw5il

We’re proud to launch this year’s Superstars for Hope campaign! Here’s a full list of #WWE experiences you can donate to for a chance to win: https://t.co/x9CjF88CMI https://t.co/ino5NNKeek