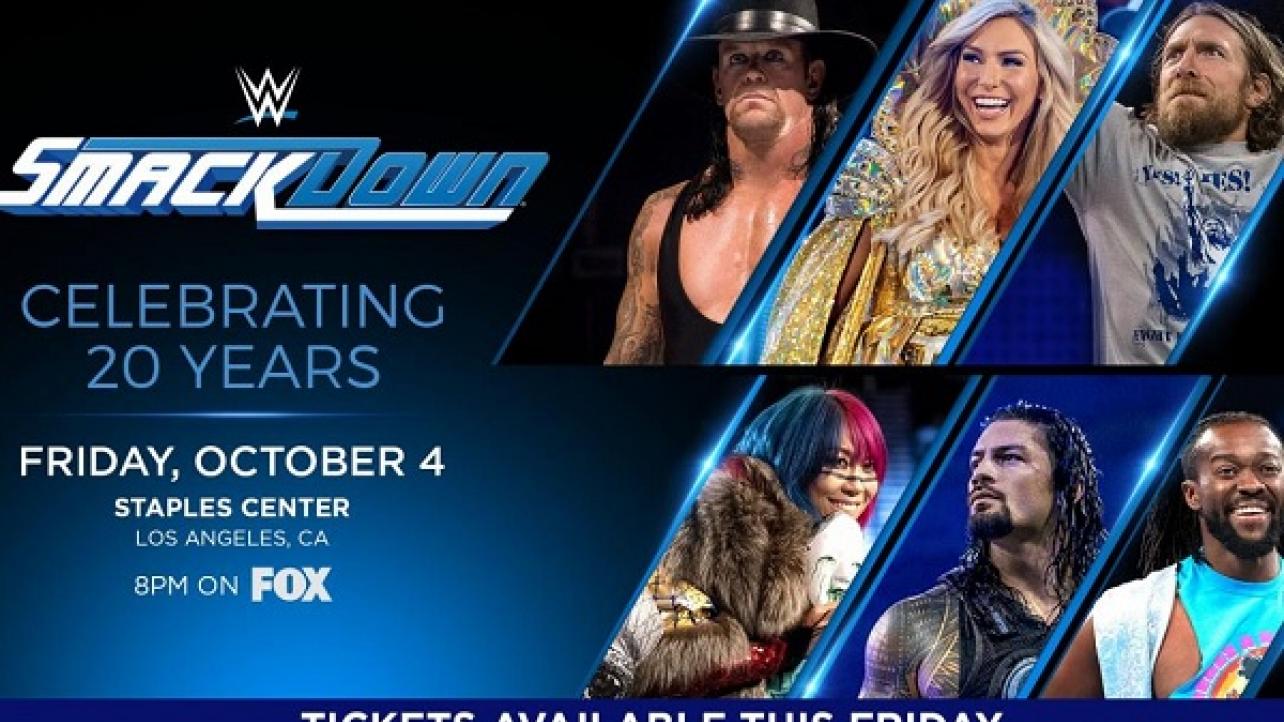 WWE will be making a big impact when the company moves SmackDown LIVE from the USA Network to FOX on October 4th.

The company announced on Monday morning that they will be debuting on their new cable partner for the blue brand on 10/4 with a special WWE SmackDown 20th Anniversary special.

SmackDown’s 20th anniversary celebration is drawing near, and the WWE Universe found out how they can be a part of it on Monday morning. The 20th anniversary episode will mark the premiere of SmackDown LIVE on FOX at 8 p.m. ET and take place at STAPLES Center in Los Angeles on Friday, Oct. 4. Tickets will be available starting this Friday, Aug. 16, at 10 a.m. PT via the STAPLES Center box office, AXS.com, or by calling 1-888-929-7849.

“SmackDown has been delivering action-packed, family-friendly programming for two decades, and we look forward to entertaining generations to come as we begin this next chapter on FOX,” said Vince McMahon, WWE Chairman & CEO.

“Since we announced our five-year agreement last June, we have been eagerly counting down the days to the launch of SmackDown LIVE on FOX Sports,” said Eric Shanks, Chief Executive Officer and Executive Producer of FOX Sports. “We couldn’t be more excited and are pulling out all of the stops to commemorate SmackDown’s 20th anniversary celebration.”

Beginning with the 20th anniversary celebration on Friday, Oct. 4, SmackDown will air on FOX 52 weeks a year and captivate fans with a unique combination of edge-of-your-seat action, unpredictable drama and world-class athleticism.

On the air since 1999, SmackDown LIVE is the second-longest running weekly episodic cable television show in U.S. primetime history, only behind Monday Night Raw, and is currently among the most-watched regularly scheduled programs on primetime cable. SmackDown LIVE has aired more original episodes than some of the most popular television series of all time, including The Simpsons, Gunsmoke, Lassie and Monday Night Football.

Make sure to join us here at eWrestling.com on 10/4 for live WWE SmackDown 20th Anniversary results coverage!

The 20th anniversary episode on Friday, October 4th will mark the premiere of #SDLive on @FOXTV at 8 p.m. ET!https://t.co/qWgOgMPNlE