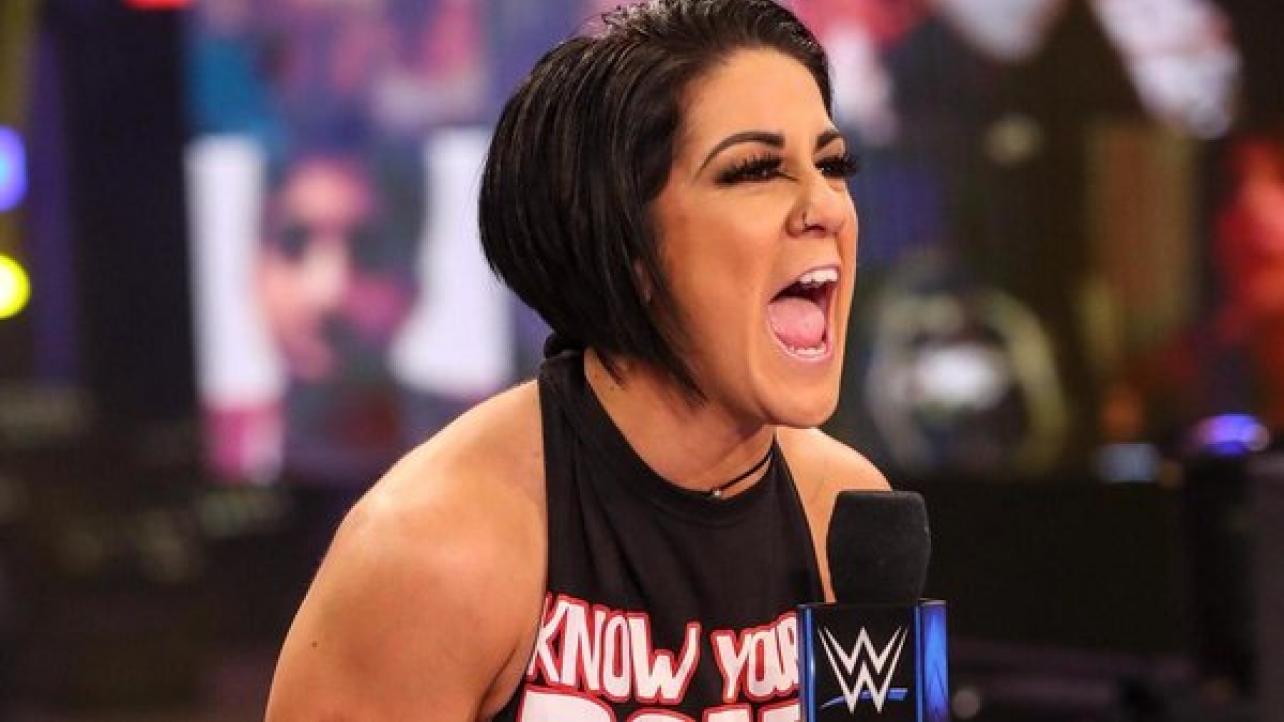 It’s Wednesday, and that means it’s time for a recap of the WWE YouTube show, The Bump! Today’s show is full of guests, including Shotzi Blackheart, Cameron Grimes, Bayley, Mustafa Ali, and Ricochet. Now that we’re all caught up on what’s going down, let’s take a look at The Bump!

⁃ Kayla kicks off today’s show by telling viewers “we’re gonna have a good time”, and she runs down the list of guests that’ll be on the show today.
⁃ The rest of The Bump crew joins the show, and they all share their thoughts on the latest WWE happenings, until Kayla brings on the first two guests.

Ali kicks things off by wondering why he’s on the show at the same time as Ricochet, and gives himself his own introduction. Ricochet says “that’s unnecessary”, and Kayla gets things back on track. Kayla asks about the current rivalry between both men, and Ali tells her “this is love. I’m telling my friend to stop lying to the world. But he is a little hard headed…” Ali stresses “that’s the truth”, and Ricochet responds. Ricochet tries to get a word in, and Ali interrupts him, until Ricochet tells Mustafa “I use your tricks against you one time, and then you get all hot at me.” Both men continue to argue, and Kayla pulls things back together. Kayla shows both Superstars a clip of a promo exchange they had together, and asks how that’s helped “fuel the rivalry between you two”. Both men continue to bicker, and they can’t decide who should talk first. Ali says “the better one goes first”, but then offers the floor to Ricochet. Ricochet tells viewers “this is our way of putting all of this into our own words. We know how good we are. This is us knowing we are the pinnacle.” Mustafa “provides a more eloquent response”, and tells the crew “you have two guys saying what they want to say, and presenting the rivalry the way we want it to be presented.” Ali continues, and says “as much as it pains me to say it, Ricochet is very good. I need to have a response, because he really keeps me on my toes”. Matt joins the conversation, and shows both men a plast match they had on Main Event. Matt wonders how the strategy changes from match to match, and Ricochet tells him “the strategy is always the same. Ali brags about, and wants to call me liar, but he cheats to win, and runs away the first chance he gets.” Once Ali and Ricochet discuss why more people should watch Main Event, Kayla brings the segment to a close.

⁃ When Ali and Ricochet exit the show, The Bump Crew quickly recaps the segment.
⁃ After the recap, Ryan heads to the big board, until another guest makes her way on to the show.

Shotzi is here to talk about Asian-American/Pacific Islander Heritage Month, and the crew seems happy to see her. Shotzi says she’s glad to be back, and Kayla wants to know how she is feeling. Shotzi tells Kayla “I’m bummed we lost the tag titles, but I’m still having a blast.” Evan chimes in, and he wonders how Shotzi and Ember Moon plan to bounce back, after losing the tag titles. Shotzi says “we’re gonna get to it, and we’re gonna work our way back to the NXT Women’s Tag Team Championships.” Matt jumps in, and he asks if Shotzi knows she “scares so many people” when she takes a dive. Shotzi explains “I want people to fear for my life every time I get in the ring.” Kayla shows Shotzi a brutal spot from NXT, and she tells Kayla “when you think about stuff, things go wrong. I’m just doing that like ‘weeee’.” Kayla reminds Shotzi that she competed in the most matches on NXT last year, and she wonders how Blackheart will keep her momentum going. Shotzi responds, and explains “that’s amazing. I’ve been on your tv screens alot.” Ryan finally asks what this month means to Shotzi, and she tells viewers “I am proud of my heritage. I grew up with Filipino culture in my life.” Matt follows up by asking what’s still a part of her life on a day-to-day basis from the culture, and Shotzi discusses all of the Filipino food she likes. Shotzi continues, and says “we just love cooking for people. If you came to my house, you were gonna eat, even if you already ate”. Kayla thanks Shotzi for stopping by the show, and Blackheart leaves.

⁃ Before moving on to the next guest, The Crew makes a few Peacock plugs.
⁃ Af the plug, we’re going “to the moon!”

Cameron joins the show in-character, and he says “I’m here baby!” Kayla calls Cameron a “style icon”, and jumps right into things. Kayla asks Cameron about being out bid by Ted Dibiase, and Grimes tells her “stocks have been going down, so I’m fired up. This crazy old man won’t leave me alone! Ted thinks he’s just gonna show up and get a bigger watch than me? Big deal!” Cameron wonders what Ted did with “his own private club”, and transitions into talking about a mansion. Cameron explains everything that he found in the house, and then yells “and then I didn’t even get the place!” Matt asks if Cameron has learned anything from Dibiase, and Cameron tells the crew “I’m learning not to trust him! He needs to learn not to pick on children. Cameron Grimes is for the children!” Evan wonders if Cameron should get one over on Dibiase, and start carrying “The Billion Dollar Championship”. Grimes tells Evan “I like the way that sounds,” before the hosts transition into other topics. Kayla wonders if Grimes can explain crypto currency, and Cameron says “you always wanna buy, but you never wanna sell. Hold on to that dogecoin!” Kayla asks a final question, and she wants to know if Cameron would sponsor The Bump. Cameron tells her “we will have to talk about the return I would get, so we need to go through the logistics. I could see myself putting a little bit into The Bump.” Kayla thanks Grimes for the “financial advice”, and Ryan heads back to the big board.

⁃ Ryan checks in on what the WWE Universe is “buzzing about”, until another guest appears.
⁃ Mansoor pops in for a minute, and he’s still all jacked up about his Monday Night Raw debut.
⁃ After Mansoor quickly exits, The Crew announces that Braun Strowman and Cesaro will appear on Sunday’s special edition of The Bump.
⁃ Kayla then brings on the final guest of the day, Bayley.

“Ding dong, hello!” The longest reigning Smackdown Women’s Champion in WWE history joins the show, and she’s here to talk about ‘Wrestlemania Backlash’. Bayley says “I’m in Bianca’s head. I knew that she will be easy, that’s why I wanted to be her first challenger.” Evan reminds Bayley that Bianca has been “on a roll”, and Bayley explains “I’m in a different mind set now. Bianca better be scared! I had to watch her main event WrestleMania, and it didn’t make me feel good. Now I’m taking it all out on her.” Kayla follows up her comments by showing Bayley a clip of an apology from Ryan, who is a huge fan of Sasha Banks. Bayley responds before Ryan, and explains “he must be sweating so much right now. Don’t be nervous!” Bayley says “I’m the role model of WWE, and I will listen to you. Let me know what you have to say.” Ryan responds, and tells Bayley “I let my emotions get the best of me. I was wrong, and I was unprofessional. I promise no one asked me to do this.” The crew seemingly doesn’t believe Ryan, who asks Bayley if she feels disrespected by Bianca’s “supreme confidence.” Bayley tells the hosts “this is my dream, and I did it. I’m gonna do it for a long time!” Bayley runs down Bianca’s accolades outside of wrestling, and spins that into Belair not being prepared for her this Sunday. Kayla brings up all of the new champion’s in the Women’s division, and wonders how Bayley feels about the “new era.” Bayley tells everyone “I’m happy for them, and they are all welcome for the work I did before them.” Matt brings up The Bella Twins attacking Bayley at WrestleMania, and Bayley says “this won’t be the last time we see each other… you embarrassed me, and I’m not gonna forget that. Yeah I’m calling both of you out!” Ryan then asks if Bayley still had beef with Michael Cole, and she tells viewers “you don’t know what it’s like to hear his voice every Friday night… All he does is say ‘Boss Time’!” Kayla reminds everyone that Cole is her boss, and jokingly says she’s not gonna let anyone slander him. Bayley finishes up the interview by talking about her talk show, until Kayla brings the final interview segment to a close.

⁃ The Crew hypes NXT UK, which goes down Thursday, and the show fades to black.