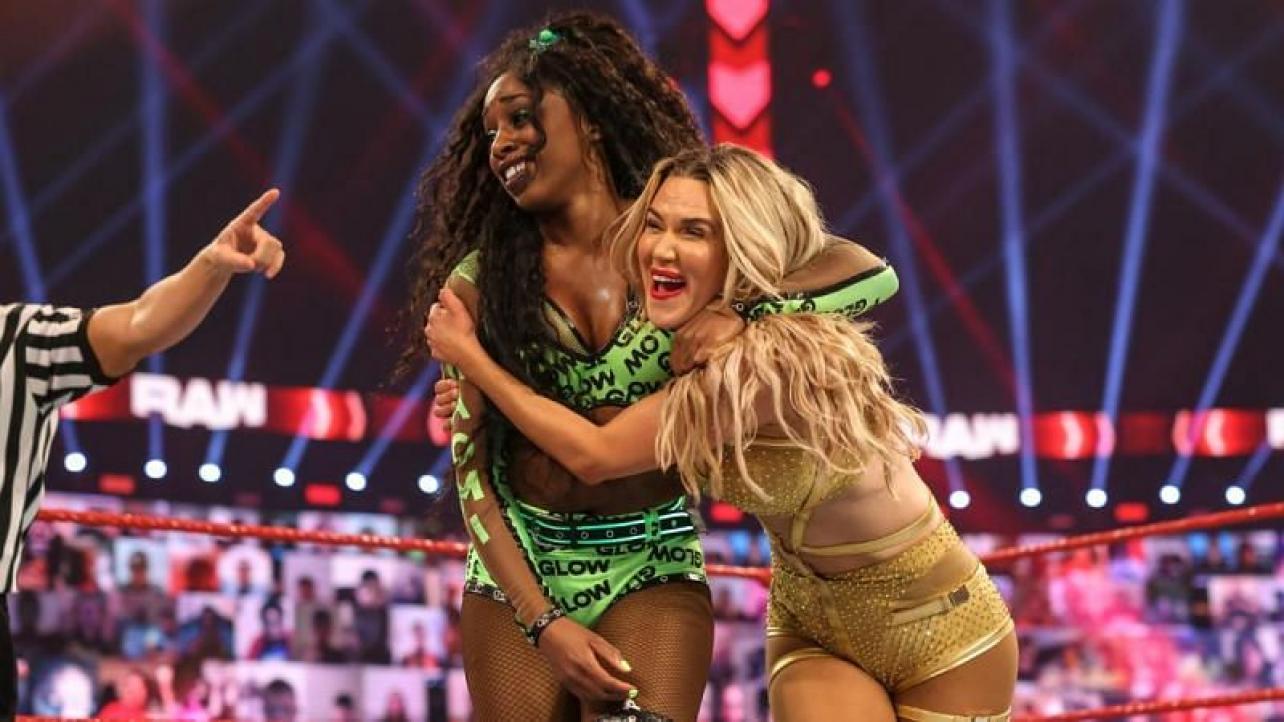 It’s Wednesday, and that means it’s time for a recap of the WWE YouTube show, The Bump! Today’s show is full of guests, including The Viking Raiders, Titus O’Neil, Kyle O’Reilly, Naomi, and Lana. Now that we’re all caught up on what’s going down, let’s take a look at The Bump!

⁃ Kayla kicks off today’s show by telling viewers “we’re gonna have a good time”, and runs down the list of guests that’ll be a part of the show today.
⁃ The rest of The Bump crew joins the show, and they all share their thoughts on the latest WWE happenings, until Kayla brings on The Viking Raiders.

Kayla kicks off the interview by asking how the guys are doing, and Ivar tells her “fantastic”. Erik adds to that, and he tells viewers about his motorcycle injury from the past. Erik ties that into Ivar’s recent return, and he explains “we keep rolling, we keep winning, and you can’t stop that.” Evan wonders how the long wait felt for Ivar, and he tells the crew “when you come back earlier than you expect to, and you make an impact… man we are pumped!” Matt joins the conversation, and he wants to know how much anticipation the guys had to return. Ivar tells Matt “it was important for me to feel that energy again… it’s been so long.” Erik mentions that Ivar texted him ideas for the entire duration of his stint on the sidelines, and Ryan wonders how all of the alone time felt for Erik. Erik explains that while Ivar recovered he had “a lonely feeling” he isn’t used to having, and he also spent more time with his wife. Evan comes behind that with a clip of last week’s comments by AJ Styles & Omos, and he wonders how The Viking Raiders would fare against the tag team champs. Ivar laughs about Omos having “an enormous head”, and Erik tells the hosts “we would love to get in their with them. The bigger they are, the harder they fall. What would be more epic than doing battle with a literal giant? AJ is a historic Champion, but there is a literal giant behind him!” Kayla asks Ivar to “put a few words into the world” now that he is back, and Ivar tells the Raw tag team division “we have stared mortality in the face to be where we are now, and that’s a heavy, heavy thing… knowing that this will end someday, it’s time for us to take everything we want back. ‘The raid’ is back again!” Kayla thanks both men for joining, and the crew moves on to the next segment.

⁃ Ryan follows up the first interview by heading over to the “big board”, and he takes a look at what the WWE Universe is “buzzing about”.
⁃ When Ryan wraps up his trip to the board, Kayla welcomes on another guest.

Kyle joins the show, and he has some pretty strange looking wallpaper behind him, which he says “was so hard to put up.” Kayla brings up last night’s episode of NXT, and Kyle says “look Kross knows how I feel. A guy like me and a guy like Kross… I think we would mesh very well. I have the tools to beat him.” Ryan wonders how fun it’s been to show the world “cool Kyle”, and he explains “it’s fun to be myself again and let loose. It’s fun to be having fun, and be the weird, quirky dude again.” Evan wonders what the difference is between this Kyle, and the one from the Undisputed Era, and O’Reilly mentions “it’s cool to branch out. It’s cool to take a step back, and see what will work”. Matt asks if Kyle feels like he is “the bridge to the next era of NXT”, and O’Reilly explains “if I’m playing that role, that’s something to be proud of. To be the benchmark, it’s a cool responsibility that I’m happy to have.” Kayla shows Kyle a clip of Adam Cole’s interview segment from last week’s NXT, and O’Reilly responds. Kyle tells the crew “I don’t think anything could end things between me and Cole. Hopefully many years from now we can be cordial, maybe. I feel like for the rest of my career, in some shape or form, Adam will be involved. I’m sure he would like to take me out, but he won’t be able to vanquish this ghost from his past.” Evan throws his two cents in, and he wants to see a rivalry between Kyle and Kushida. Kyle tells Evan “he is one of my favorite opponents. Hopefully one day down the line we can make that happen. It would be so special.” Kayla ends the conversation by bringing up the fact that Kyle is closing in on 4 years with NXT, and she wonders if he see’s himself as a leader now. Kyle explains “absolutely. There is such a cool environment here. Many people are actually seeking help, and it blows my mind that people want to know what i think… honestly that’s what i really love about NXT.” Kayla thanks “cool Kyle” for stopping by, and we’re on to the next segment.

⁃ Matt makes everyone a nice drink for Cinco De Mayo, which includes The Rock’s tequila, and now I’m thirsty.
⁃ Kayla gets the show back on track, but not before reminding Matt to “use fresh lime juice, instead of the bottled stuff”, and she welcomes on Titus O’Neil.

Titus joins the show, and he’s laughing because “ I just made a protein shake, and y’all are mixing margaritas.” Kayla and the crew laugh with him, before Kayla asks how Titus is doing. Titus talks about his induction into the Boys and Girls Club Hall of Fame, as well as winning the Warrior Award, before saying “it’s all been a full circle moment for me. I couldn’t even get into the Boys & Girls club as a kid, and now I’m in the Hall of Fame. It’s really special.” Ryan brings up that only four WWE Superstars have been inducted into the Boys & Girl’s Club Hall Of Fame, and they are Naomi, Mr. McMahon, Triple H, and now Titus. O’Neil responds, and tells the host’s “being able to use my platform to bring more recognition to the Boys & Girls club is amazing. I’ve had so many firsts with them.” Evan brings up the Warrior Award, and Titus tells the crew “it was definitely a surprise to win it. I’ve never wanted to be acknowledged for my work. This is about paying back people who made a life for me.” The crew thanks Titus for stopping by the show, and the final interview segment is up next.

Kayla starts off the conversation by asking Lana about last Monday night’s loss, and brings up that they “could have won” until Reginald got in the way. Lana states “I hate his guts. This is third time he has got involved. It’s very frustrating! I’ve done questionable things before, and Naomi tells me we should probably cheat, but I sleep better at night knowing I do things the right way.” Naomi adds to that, and explains “you keep my focus on the right track. I’m getting pissed, maybe we should hold auditions for a third member.” Matt wonders if that is the next move for the duo, and Lana tells him “that’s an amazing idea.” Naomi adds “I can’t touch him, so yeah we should get another person to.” Ryan asks why the pairing is “working together so well”, and Lana brings up dance, which she believes “brings people together.” Lana continues, and mentions “we go to extra training, we put blood, sweat, tears into this, because we want this. No one will stop us.” Naomi throws her two cents in, and tells the hosts “no one is more driven that Lana. She doesn’t fly home, she just trains and trains. I have to tell her to take a break!” Kayla follows up by asking Lana how it felt to be in a featured match at WrestleMania, and Lana talks about her first ‘Mania match, on the pre-show in Dallas. Lana begins to discuss Wrestlemania 37, and says “it was such a cool accomplishment to be on the show, and have this fun, colorful entrance.” Kayla appreciates both women for making an appearance, and the final interview segment comes to a close.

⁃ The Crew hypes NXT UK, which goes down Thursday, and the show fades to black.