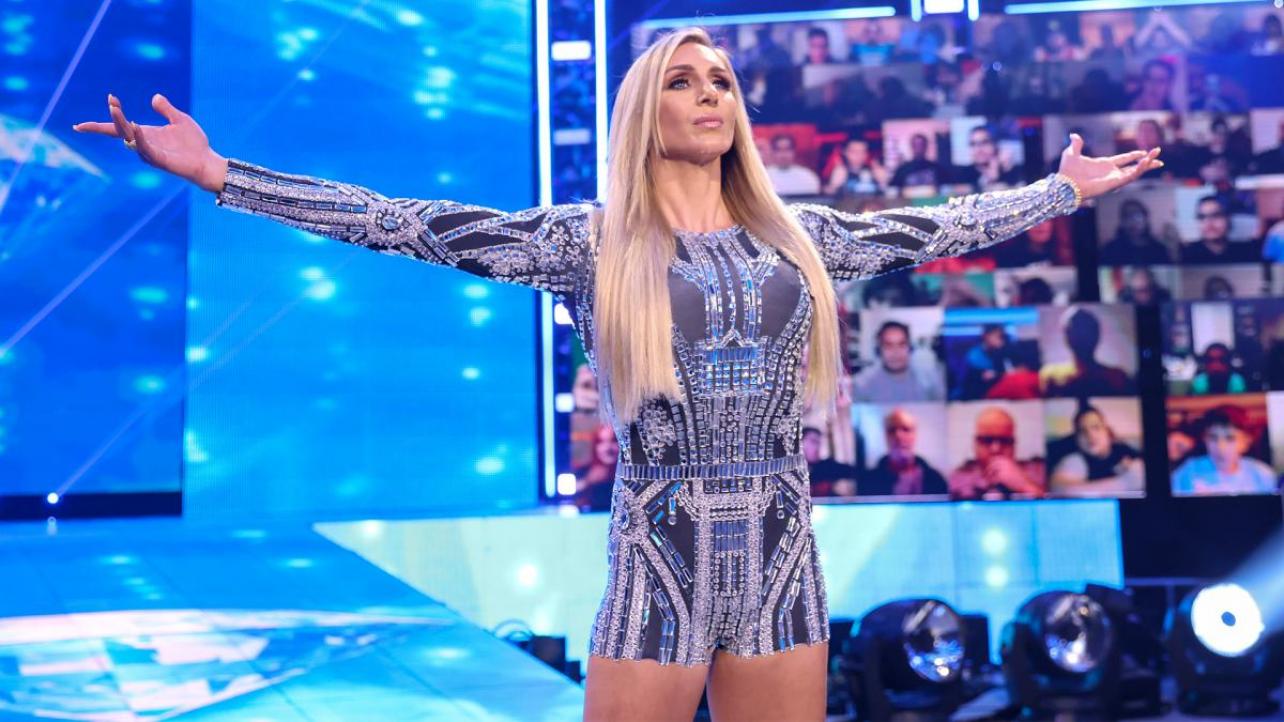 It’s WWE Hell In A Cell Sunday, and that means it’s time for a special edition of the WWE YouTube show, The Bump! Today’s edition of the show is full of guests, including Charlotte Flair, MVP, and Jimmy Uso. Now that we’re all caught up on what’s going down, let’s take a look at The Bump!

⁃ Kayla kicks off today’s show by telling viewers “we’re gonna have a good time”, and she runs down the list of guests that’ll be on the show today.
⁃ The rest of The Bump crew joins the show, and they each share general thoughts about tonight’s Hell In A Cell event, until Kayla brings on the first guest.

MVP is speaking on behalf of Bobby Lashley, and he begins by running down the hosts, mockingly asking them “what makes you think Bobby Lashley wants to be on this show before the biggest match of his life? Who came up with that idea?” Evan says MVP is looking ripped, and P explains “I’ve been training with Bobby. He’s Mr. No Days off, and I’ve been given him insight on life in a cell, if you will.” Kayla changes gears, and she addresses Lashley being pinned last Monday. MVP responds, and tells her “McIntyre likes to remind us about the distraction at Wrestlemania… Lashley was distracted like Drew was, so that don’t even count.” Matt chimes in, and asks if Drew has the experience advantage tonight. MVP tells him “I have immense respect for Drew McIntyre. His will to win is impressive beyond words, but he’s going against the All-Mighty, and Drew McIntyre cannot beat the All-Mighty. Bobby isn’t in the cage with Drew, Drew is in the cage with Bobby.” Ryan joins the conversation, and asks why the stipulation is important to tonight’s match. MVP responds, and questions why Drew gets “opportunity after opportunity.” MVP adds “Do you really want to see Bobby Lashley beat Drew McIntyre again?” Kayla asks MVP how important a win would be to Lashley’s resume, and P gets very irked by the question, before explaining “Lashley has Drew McIntyre’s number. Bobby won’t walk out unscathed, buts it’s about who will be the better man, and time and time again Lashley is the better man.” Kayla thanks MVP for stopping by, and The Bump crew moves on.

⁃ Kayla and the crew preview the WWE Championship Hell In A Cell match.
⁃ The crew also previews Seth Rollins vs Cesaro singles contest.
⁃ Ryan and Evan Preview the Raw Women’s Championship match, until another guest makes her way on to the show.

“The Queen” makes her way on to the show, and she looks happy, telling the hosts “I’m smiling to much! I’m supposed to be mean.” Kayla dives right in, and asks Charlotte about the brawl with Rhea Ripley from last Monday. Charlotte turns the tables, asking Kayla “does she even want to face me tonight?” Ryan ask if the fight has made her more cautious heading into the match tonight, and Charlotte says “I want the best Rhea Ripley, and she will get the best Charlotte flair.” Matt asks if Rhea has gotten under Charlotte’s skin, and she says “no, just pick a place and pick a time… I’m ready to go.” Evan wonders how Charlotte feels about Rhea’s title reign so far, and Flair says “you can’t deny that she is finding herself. She seems to always do well in high pressure situations.” Kayla hops in again, and asks if Charlotte has noticed a different Rhea since WrestleMania 35. Charlotte explains “no, she had it then, and she had it now. I don’t think there’s any difference.” Matt brings up Charlotte’s recent losses to Nikki Cross, and Charlotte tells him “I need to stop showing off. My attention was more on Rhea than it should have been.” Evan wants to know if we’ve seen the best version of Charlotte Flair yet, and she tells him “I don’t even think I’ve seen the best version of Charlotte Flair. I’m in my prime.” Kayla asks for a final statement before the match, and Charlotte makes a demand, telling Rhea “bring the best Rhea Ripley, I’ll bring the best Charlotte Flair.” Kayla thanks Charlotte for stopping by, and it’s time for predications.

⁃ The Bump crew makes a few predictions, as well as the WWE Universe.
⁃ Ryan, Matt, and Evan make more predictions, until Kayla brings on the next guest.

Kayla asks a question right away, and she wants to know how Jimmy is holding up. Uso looks dejected, and tells her “it’s a little different with family. It hits harder… I’m fighting with my blood. I didn’t intend on coming back this way.” Matt joins the conversation, and asks about Jimmy’s current status with Reigns after last Friday. Jimmy explains “I feel like I’m pushing my brother away… if you can’t beat them join them right? Jey said he’s in the middle, and we all feel that way… except the head of the table I guess.” Ryan brings up unity, and wonders if Jimmy has been doing what he feels is right. Uso explains, “if I gotta take a backseat to this… I don’t know. I’m in the middle to man, I’m lost. I don’t know just like yall.” Ryan takes Uce back to his return, and wonders if Jimmy expected any of this. Uso says “I thought the Uso penitentiary was gonna open back up again. Now my brother froze on me… I never thought he would freeze on me. I thought I was gonna come back and we were gonna be seven time champions man.” Matt brings up the fact that Roman cost them the titles two weeks ago, and Jimmy explains what happened. Uso says “it’s about him. He didn’t have to do that. He took our opportunity. He took what was ours.” Evan hops back in, and asks what kind of toll this has all taken on the rest of his family. Jimmy pauses for a moment, and tells The Bump crew “I hear it at work, and I hear it off work. Everyone asks what we’re doing. We’re just being brothers man, but for some reason this isn’t being hashed out. Why can’t we just meet in the middle bro? I don’t know man…” Evan follows up by asking about Jimmy’s expectations as a competitor, and Uso tells him “I haven’t even thought about it. I can’t focus without my brother. We’re a true tag team. But as far as being a competitor, I’m trying to be a brother first.” The Bump crew thanks Jimmy for his time, and more previews are next.

⁃ Kayla and the crew preview the never ending battle between Sami Zayn and Kevin Owens.
⁃ The hosts make their predictions for the Smackdown Women’s Championship, as well as the match between Alexa Bliss and Shayna Baszler.
⁃ Matt, Evan, and Ryan make their final three predictions, until Kayla signs off.

That’s all for this episode of The Bump. Enjoy tonight’s WWE Hell In A Cell!