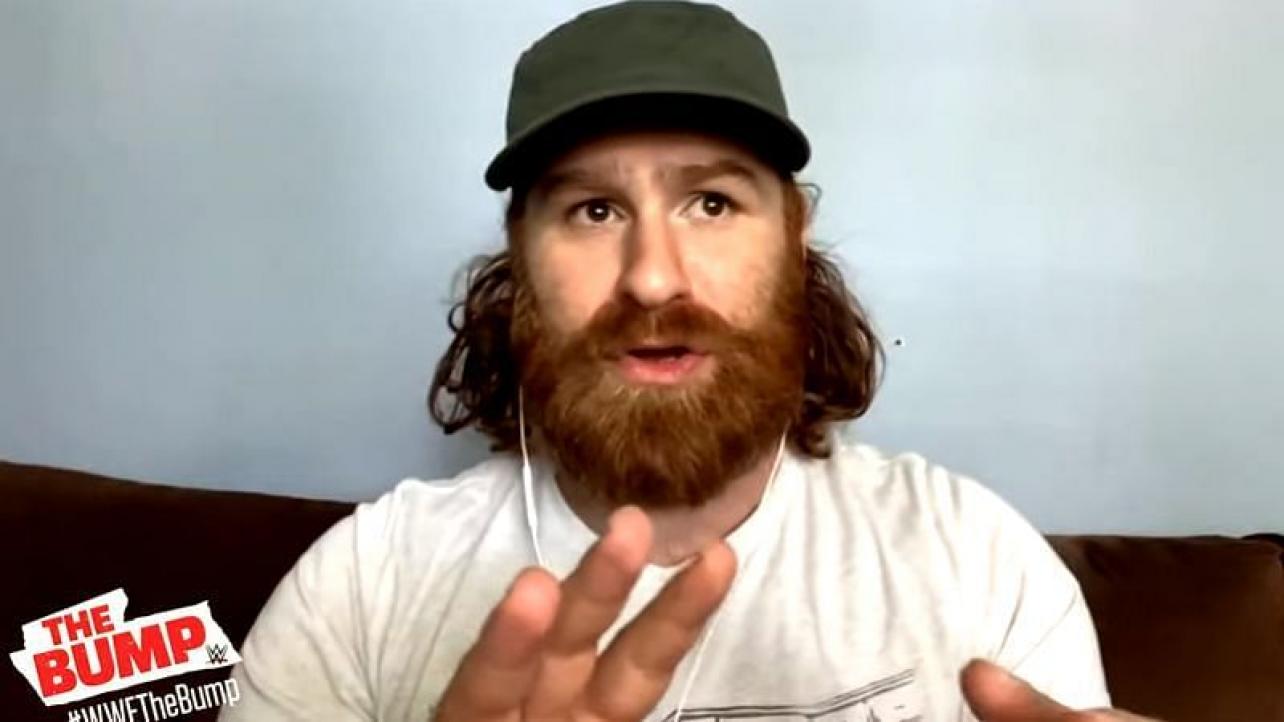 It’s Wednesday again, and that means it’s time for another episode of the WWE YouTube show, The Bump! Today’s edition of the show is full of top notch guests, including Sami Zayn, D-Von Dudley, and Sonya Deville. Now that we’re all caught up on what’s going down, let’s take a look at The Bump!

⁃ Kayla kicks off today’s show by telling viewers “we’re gonna have a good time”, and she runs down the list of guests that’ll be on the show today.
⁃ The rest of The Bump crew joins the show, and they each share general thoughts about the latest episodes of Raw and NXT.
⁃ After Matt, Ryan, and Evan place a few thoughts out into the world, Kayla brings on the first guest.

Sami joins the show, as he sips a cup of tea, and Kayla realizes Sami looks “calm.” Kayla asks Sami how he feels after the win on Sunday, and Zayn tells her “you know what really makes me happy? Watching Kayla try to pretend she’s happy I am here. Do you remember what happened?” Sami brings up his previous appearance on The Bump, and Kayla switches gears into asking about last Sunday. Sami tells her “at the very least, things haven’t gone my way the last few months. I think it’s all a part of a deep conspiracy against me, as I touched on in my documentary. At a certain point you reach a point of dispair, and when I need it most, the universe showed me the way. I beat Kevin Owens!” Ryan asks his first question, and asks Sami about the truth. Ryan says the truth is that Zayn beat Owens at Hell In A Cell, and he wonders if this is the final match they will have against each other. Sami explains “I can’t say with any certainty that I’m done with Kevin Owens. I can never say it’s over for good, and at the very best, i just hope he will sit on the shelf for a while. With him, it’s never over.” Matt brings up that Owens came into the match injured, and Sami shares his thoughts on the fact of the matter. Sami says “what happened is that I injured his shoulder. When his shoulder gives out mid-match, that was me, I did that. I’ve had multiple injuries… I don’t know if you’re trying to negate my victory, but I take full credit for it. I fought that match, he punched me in the face, I punched him in the face, and I won.” Kayla thanks Sami for stopping by the show, and The Bump crew moves on.

⁃ When “The Great Liberator” exits the show, The Crew briefly recaps the interview segment.
⁃ The hosts play a quick round of “Ask The Bump,” until Kayla brings on the next guest.

Kayla kicks off the interview by asking Sonya about Pride month. Sonya says “pride month is different for me every year. Five years ago I celebrated it for the first time. Now, Pride month is about enjoying and appreciating how proud I am to be myself now. You are who you are, and everyone else is taken, so just be you.” Matt brings up 10 years ago, and Sonya explains “I was dating guys. I was lying about my sexuality, and not telling everyone how I really felt. It’s crazy to see how I am now. I surprise myself, and hopefully it can help others, who are feeling the way I did 10 years ago.” Ryan shows Sonya a clip of Toni Storm announcing she’s Bi, and Deville responds to the clip. Sonya says “its so incredible to see. These communities are becoming so much more inclusive, and it’s that courage that is making a change in the world. It’s that courage that is making the difference. Thank you for being you.” Kayla asks Sonya about having her own merchandise now, and Sonya explains “it’s surreal. It’s so cool to me how every year we become more and more inclusive in WWE. It means so much to me, and it’s just really cool to see. GLAAD has been a great partner for me and WWE, and it’s just exciting to see us do more and more every year.” The Bump crew thanks Sonya for making an appearance, and the show rolls on.

⁃ The host’s all put on New Era baseball caps, and talk about where viewers can get their own, until the final guest arrives.

“Oh my brother, testify.” D-Von makes his way on screen, and he seems to be in good spirits. D-Von and the crew talk about the Yankees for a bit, and Brother D-Von shares his joy of watching the New York Yankees play. D-Von shares a list of his all-time favorite players, and Matt changes gears into wrestling. Matt wants to know how D-Von feels about the upcoming return to the road, and he tells the hosts “everybody in the WWE family was over the top excited when we heard the news. The excitement, and enthusiasm, the pure adrenaline that goes through your body when the fans are there…it’s just one of the greatest things about being a performer. You can make them go yay, or boo, or ohh. That’s just what we do.” Kayla mentions that it’s time to play a game called “D-Von’s Decree,” and he talks about Bobby Lashley. D-Von says “stay away from the cell Bobby. You’re number might come up, and if it does your not gonna like what happens. He was in the cell two days in a row, and I’m just like what are you thinking dude. I thought Xavier had his number Monday night! Bobby may not be so lucky next time.” Evan brings up Bayley vs Belair, and D-Von tells him “I’m a huge fan of both. It can’t get any better than those two in the cell. Those girls went out there and worked their behinds off, and I was so happy to see them prosper the way that they did.” Ryan brings up the Raw Women’s Championship match, and D-Von talks about rematches. D-Von explains “like the old philosophy Jesse Ventura said ‘win if you can, lose if you must, but always cheat’.” Kayla thanks D-Von for his time, and that’s the end of the final interview today.

⁃ The hosts close the show by sharing a few final thoughts on NXT, and plug tomorrow’s NXT UK, as the show fades to black.