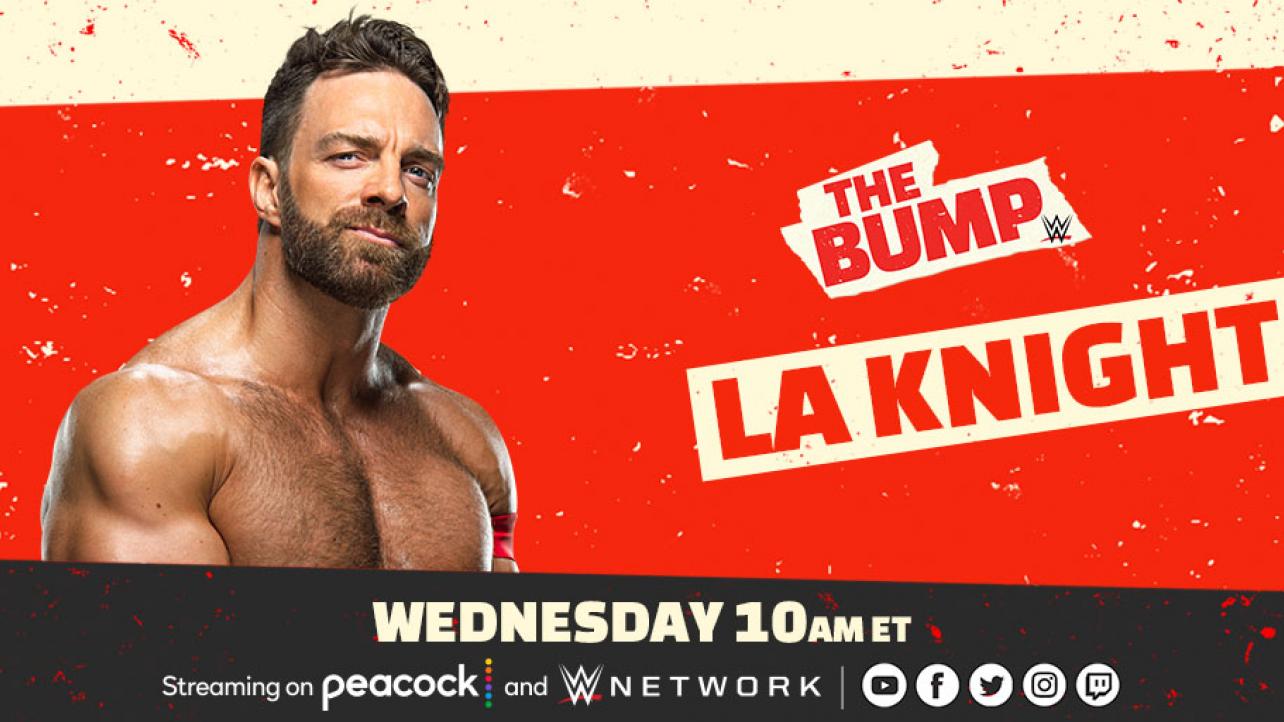 It’s Wednesday, and that means it’s time for a recap of the WWE YouTube show, The Bump! Today’s edition of the show is full of guests, including Pete Dunne, Adam Cole, Ember Moon, and LA Knight. Now that we’re all caught up on what’s going down, let’s take a look at The Bump!

⁃ Kayla kicks off today’s show by telling viewers “we’re gonna have a good time”, and she runs down the list of guests that’ll be on the show today.
⁃ The rest of The Bump crew joins the show, and they all share their thoughts on the latest WWE happenings, until Kayla brings on the first guest.

Kayla kicks off the interview by asking Pete how he’s feeling after last night, and he explains “I’m fine. It doesn’t matter how many people will be in there when it’s time to go bell to bell.” Ryan wonders if Pete is frustrated with any of the participants in the fatal 5 way match, and Pete tells the crew “I’m not frustrated, I’m ready.” Evan chimes in, and he asks Pete to share his thoughts on Johnny Gargano. Dunne responds, and tells Evan “he’s annoying, but I respect him. He’s a good competitor, but I also get to beat him up. It’s a win win.” Matt joins the conversation, and he brings up a past interaction between Adam Cole and Dunne, before asking Pete if Adam has payback coming on Sunday. Pete says “of course he does. All five of them do, but especially him.” Ryan hops back in, and he wants to know if Pete would rather be having a one on one match, instead of a fatal 5 way. Pete explains “it doesn’t matter, it’s gonna be a war, it’s gonna be a fight… it makes no difference. Evan asks another question, and he wants to know if there may be any alliances on Sunday, between Dunne and the other competitors. Pete tells viewers “at the end of the day, I’m walking out with the title, and that’s all that matters.” Kayla thanks “The Bruiserweight” for stopping by, and we’re on to the next guest.

Kayla kicks off the interview by showing Adam his own promo from last night, and she points out that he seemingly “exploded.” Cole tells Kayla “I’ve had that on my chest for a while. It’s true, and Karrion knows it true! But now people are all so shocked and flabbergasted… I’m Adam Cole Bay-Bay.” Matt asks a question, and he wants to know if Cole thinks things have been “given” to Kross. Cole explains “I think Kross is good, however, he’s been given all of the platforms to succeed. His song is epic, he has an incredible entrance, he feels ‘one in a million’. But when the bell rings, he could never touch me.” Evan comes behind that by asking Cole if he wants a one on one match with Kross, and Adam tells The Bump crew “the idea of Kross having to go against me one on one at a Takeover terrified him.” Ryan joins the conversation, and he wants to know how tough it’ll be to juggle his animosity for Kyle, while focusing on the task at hand. Cole explains “the hatred I have for Kyle is one of my strongest emotions, I feel disdain for Karrion Kross, but my focus is to win the NXT Championship back.” Kayla thanks Cole for stopping by the show, and Ryan heads to the “big board”.

Kayla starts off the interview by asking Ember how she feels after last night, and Moon explains “I am beat to hell, and that’s where Dakota and Raquel want me. But me, I thrive on pain.” Ember continues, and says “ I may be small, but I’m mighty.” Matt joins the interview, and he asks about the “looming presence” of Dakota Kai on Sunday. Ember tells him “I will definitely be on the lookout for her. I’m looking to put my foot in her face if she wants to get involved.” Evan chimes in, and he wonders if Raquel may be overlooking Ember. Moon tells him “absolutely. She put me on the shelf before, and she wants to do it again. But there is a reason why I’m here. This is the wrestling show, it’s where I thrive. It doesn’t matter how big she is, I’m gonna knock her ass to the ground.” Kayla rejoins the conversation, and she wants to know if winning the NXT Women’s Championship would be a nice “bookend” for her return. Ember says “this weekend, this match is for Shotzi. It hurt me when they injured her, and I want to hurt them like they did me.” Kayla brings the interview to a close, and Ember wish’s Kayla a Happy Birthday.

LA Knight joins the show, and he’s upset that the WWE Universe voted for Cameron Grimes to win on Saturday. LA checks the hosts about who they picked, including Kayla, who says “I don’t do that. I just direct traffic.” Knight tells the hosts “twenty-five years ago, Ted gave the title to The Ringmaster. So what are the odds that I grab the title, and have the exact same career trajectory as him? What do you think of that Kayla?!” Kayla asks what went through LA’s mind when he saw the belt in person, and Knight says “I can take that and surpass any levels expected… I mean look at that thing.” Evan wants to know what a win at Takeover would do for Knight, and LA tells him “when you talk about the gold and jewels all over that belt, nothing compares. There is a short list of people who held that title… Cameron doesn’t hold a candle to LA Knight.” Matt tries to asks a question, but Knight refuses to answer, because Matt picked Cameron Grimes. Ryan chimes in, and he wonders if Knight “looked up” to Dibiase as a child. LA tells him “I’m almost a millionaire, but I’m not quite there. LA Knight embodies what The Million Dollar man was.” Kayla runs down the list of Million Dollar Champions, and she wonders who LA Knight wants to be like the most. Knight chooses “the two in the middle(The Ringmaster, and Ted DiBiase), before throwing a zinger at Virgil. Kayla ends the interview there, and LA moves along.

⁃ Knight leaves the show, and The Bump crew covers a few more highlights from last night’s NXT.
⁃ Kayla runs down the list of next week’s guests after the highlights, until heading into the final predictions.
⁃ The Bump crew hypes NXT UK one last time, and the show fades to black.