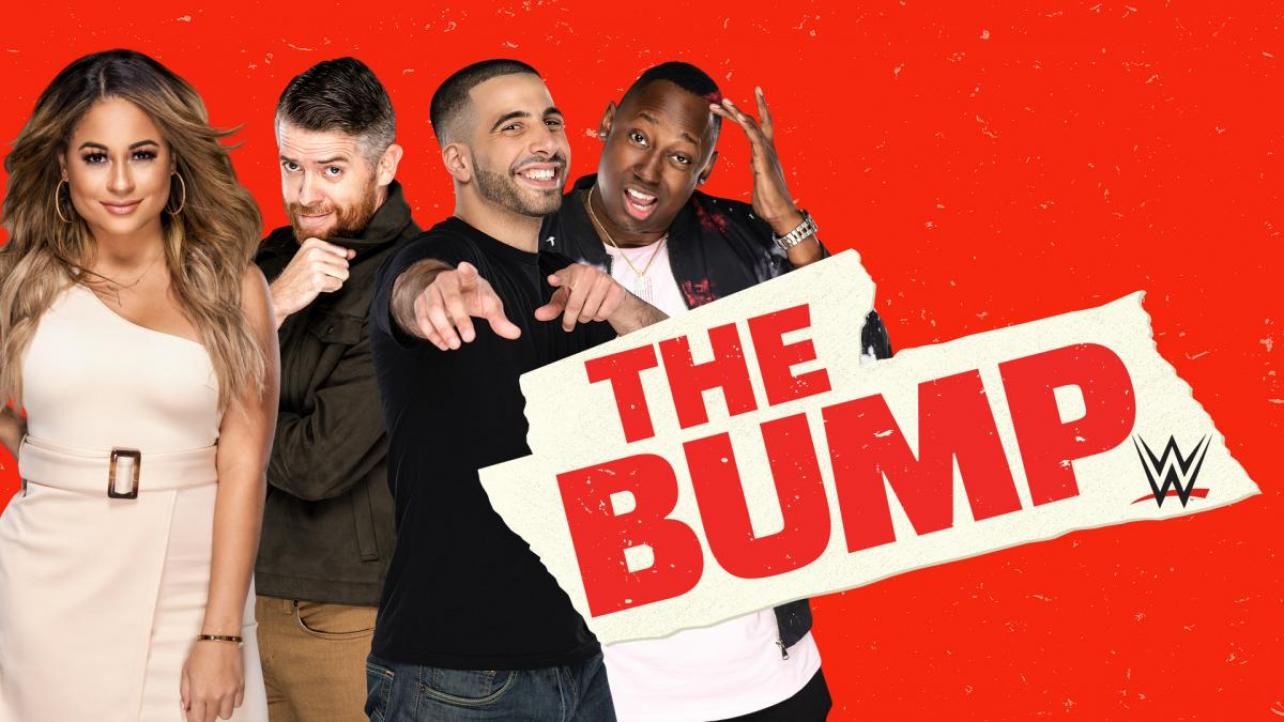 It’s Wednesday again, and that means it’s time for the rajah.com recap of the WWE YouTube show, The Bump! Today’s show is full of guests, including Molly Holly, The Hurricane, and Damian Priest. Now that we’re all caught up on what’s going down, let’s take a look at The Bump!

Kayla welcomes the viewers to the show, along with her co-hosts, Matt Camp, Evan Mack, and Ryan Pappolla. The crew begins by talking about being a month away from Wrestlemania, and Kayla announces that there will be a WWE Hall of Fame special on April 6th, which you can view on Peacock. The special will include the 2020 class, as well as this years class. After the crew shares a few thoughts on the most recent episodes of Raw and Smackdown, Kayla welcomes on the first guest of the show, Molly Holly.

Kayla asks how Molly has been doing, and Molly begins to talk about working on a farm, and working with a charity promotion. Kayla wonders what it means to Molly to see where the women’s division is today, and she mentions she “is so proud of the way everyone is performing today”. Molly adds to that, and explains how things were before, and compares how they are now. Ryan takes Molly back to her first match on Sunday Night Heat, and Molly talks about cringing at her ring gear. Molly continues, and tells the viewers that she “wasn’t what WWE were looking for at first”. Kayla chimes back in, and asks about being the storyline cousin of the Hardcore and Crash Holly. Molly talks about Crash Holly’s willingness to let her participate, and calls him and Hardcore Holly “great”. Matt wants to know about Mighty Molly, and she talks about “dressing like a superhero, and having kids dress up like me for Halloween”. Evan asks about the change in character that came after Mighty Molly, and Holly mentions “I didn’t want to be a bad guy”. Molly adds a “bonus that she didn’t have to bleach her anymore”, and talks about being “successful” in her role. Ryan begins to talk about Molly versus Trish Stratus, and Holly explains that Trish “always felt one step ahead, and seemed to be prepared for her own advancement”. Ryan randomly mentions loving the Molly-Go-Round, and Holly tells him the story of practicing the move, before she used it in the ring. Molly explains that she initially struggled, before having a conversation with Dean Malenko, who Molly executed the move on perfectly for the first time. Evan brings the interview to more recent times, and talks about the one off appearances Molly has made during recent Royal Rumble matches. Molly says “the fans were so gracious, chanting you still got it”, but she disagrees with that. Kayla wonders who Molly enjoys watching in the modern women’s division, and Molly says “there are so many who just make me go “wow””. Kayla then brings on The Hurricane, aka Shane Helms. Shane and Molly exchange pleasantries, and Shane talks about his favorite memories of working with Molly. Shane explains that Molly “picked up on it really quick, and she did a good job”. Shane mentions his favorite memory of Molly, which is when she returned to the Royal Rumble as Mighty Molly. Shane talks about “having tears in my eyes as she did the Mighty Molly walk”. Ryan “attributes the popularity of Superhero’s” to The Hurricane and Mighty Molly, and Shane talks about wishing he “could be young in today’s times”. Matt wonders what made the partnership between them both work so well, and Molly tells him “the fact that we were friends in real life”. Shane then shares something with the crew, and gets emotional. Shane announces that the first inductee of the 2021 Hall of Fame class is Mighty Molly. Que the “you deserve it” chants! Kayla thanks Molly for joining, and Shane sticks around.

Shane still needs to collect himself before beginning his interview, and goes into talking about the producing gig that he “loves”. Evan asks Shane to reflect on his most recent Royal Rumble appearance, and Shane tells him “ that’s the hardest bump I’ve taken in a long time”. Shane adds that someone came to ask him if he is ok, and he said “NO”. Matt wants to know what interested Shane about wrestling in the first place, and Shane explains “the hooks were in from day one”. Shane adds to that, saying all of his superhero comic books and action figures “became wrestling action figures”, after he went to his first wrestling show. Matt takes Shane back to the origins of The Hurricane, and Shane explains “they just didn’t want to have two Shane’s”. Shane talks about pitching the character to creative, specifically Stephanie McMahon. Shane says that Stephanie told him she would tell Vince about it, and Vince came by a few hours later to tell him “I like it”, pal! Ryan mentions that The Hurricane defeated The Rock 18 years ago today, and wonders why it “connected with people so much”. Shane explains that it was a “perfect David vs Goliath moment”, and how the two were initially supposed to “have a one-off segment”. Before Shane leaves, Kayla wonders what The Hurricane wants his legacy to be. Shane says “it was more difficult to pull off than people realize, and I hope I made people smile”. After the closing comments, Shane exits the show.

Once Shane leaves, The Bump crew plays “Stump The Bump Trivia”. After the trivia concludes, it’s time for another interview. Kayla welcomes on the final guest, Damian Priest.

“The Archer of Infamy” makes his way onto the show for the first time, and Kayla asks how Damian has been. Priest tells her “I’m on cloud nine”, and talks about what he has done on tv over the last month. Priest discusses “working with Kane and Egde, and being out there with Bad Bunny”, before adding “it’s been a blur”. The crew shows Damian clips of a few words Kane had about him, and Kane calls him “extremely talented”. Priest responds, and says “I can’t even explain my emotions right now”. Evan joins the conversation, and asks about an interaction with Edge. Priest tells him “it caught me off guard”, and talks about legends, saying “I feel extra pressure, like I can’t let them down”. Priest begins to talk about making the move over from NXT, and Damian says “my friends have taken the stress off”. Evan wonders how it’s been for Damian to “kick it with the bunny”, and Proest explains “he’s doing something he loves, and we are legit friends”. Matt mentions the times Bad Bunny has gotten physical, and Preist explains “he wasn’t supposed to succeed like this”. Ryan asks about Bunny nearly being the longest reigning 24/7 Champion, and Preist jokes that he warned Bunny to be careful ahead of The Grammy’s. Kayla wants Priest to share his thoughts on Miz and Morrison, and Damian mockingly states “those guys are so lovable”. Kayla asks about Damian practicing Karate as a child, and Priest explains to her that “martial arts played a huge part in me being a wrestler, and the person I am today”. Kayla thanks Damian for joining the show, and the segment ends there.