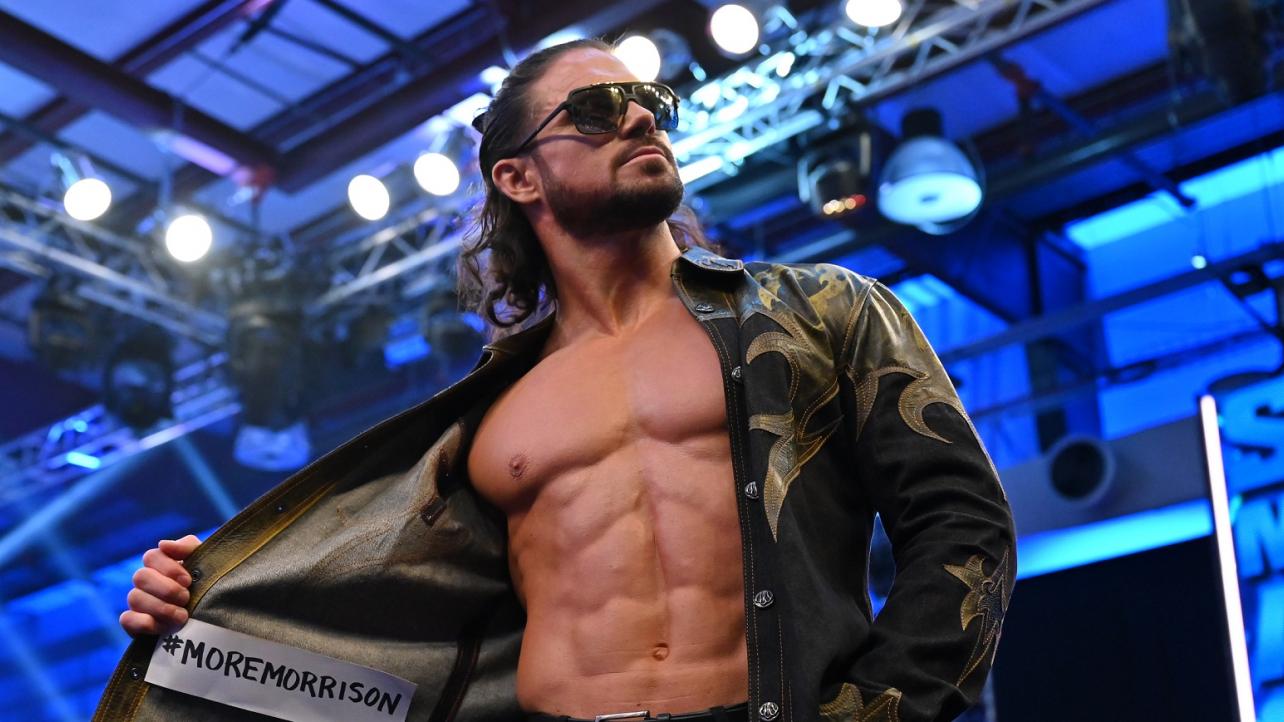 It’s Sunday, and that means it’s time for a special Money in the Bank edition of WWE’s The Bump! Today’s episode of The Bump is full of top notch guests, including Riddle, Zelina Vega, and John Morrison. Now that we’re all caught up on what’s going down, let’s take a look at The Bump!

⁃ Kayla starts off the show, and she tells viewers “we’re gonna have a good time.”
⁃ The rest of The Bump crew previews tonight’s WWE and Universal Championship bouts, until Kayla brings on the first guest.

Riddle joins the show, and he says “it’s a big day.” Kayla ask Riddle what’s on his mind before tonight’s show, and he says “I’ve been watching highlights from back in the day, and it’s a brutal contest. I’m really excited to do this type of match in front of a live crowd. It’s gonna be serious! I think I’m gonna bring it home to Randy.” Evan chimes in, and wonders if the fans will give Riddle a boost tonight. Riddle explains “at the end of the day they can’t help me up that ladder, but if they start chanting for Randy that might help. Ryan joins the conversation, and he asks if Riddle has a message for Randy. Riddle does have a message, and he tell Orton “Right now the only message I have for Randy is, bro, I miss you… and I’m not gonna let you down. I’m going to make it rain vipers bro.” Matt points out that numerous people have warned Riddle about his friendship with Randy, and questions whether Riddle can trust Orton or not. Riddle responds, and says “most people give up on relationships to early, they don’t stay committed. I’m here to pick Randy up, and he’s always there to pick me up bro. People can say what they want, but they just don’t understand. People need to see the big picture, not just the little picture.” Kayla rejoins the conversation, and asks which ladder match from the past will help him the most tonight. Riddle responds, and tells Kayla that there isn’t one match that helped. Riddle covers all of the highlight reel moments he’s seen, before saying “you just have to go pedal to the metal, and whoever climbs the ladder is the one who wins.” Kayla thanks Riddle for stopping by, and sends him good luck ahead of his match tonight, as the show moves on to the next segment.

⁃ Matt, Evan, and Ryan preview the men’s and women’s Money in the Bank ladder match, as well as the Raw Women’s Championship battle, until Kayla is interrupted by the next guest.

After Zelina runs down Kayla, The Bump crew finally begins the interview. Kayla reluctantly asks the first question, wondering why Zelina will win tonight. Zelina explains “if anyone has the most chance in this match it’s me. I have some things up my sleeves, even though I’m not wearing any sleeves.” Matt points out that this will be the first ladder match for Zelina, who tells viewers “I’ve watched old matches on Peacock. I’ve asked people who have been in the match questions, unlike Liv Morgan.” Ryan wonders if Zelina can understand the frustrations Liv must have, after being overlooked so much lately, and Vega tells him “considering I’ve done this since I was 17, I get the grind. But it’s like no, I have no respect for Liv. She is disgusting, she cries to get what she wants. I mean look at her she’s crazy.” Evan wants to know if Zelina has anything to prove tonight, and she tells him “absolutely. I was home preparing for this moment. I knew this moment would happen, because I’m just that damn good. I can make the money in the bank contract mean something.” Kayla brings up last Friday, and recalls the fan reaction Zelina had in Houston. Zelina responds, and tells the crew “it helps to fuel the fire. You want to make it worth it for yourself, and you also want to make things worth it for them. But I’m not here to make friends, I’m here to win the briefcase.” Evan chimes in, and compliments to Zelina on her past accomplishments, before asking if there’s anyone Vega would like to manage. Zelina briefly thinks it over, and explains “I will say that I’m impressed with Shotzi and Tegan. I feel like we can all see eye to eye. I mean have you seen Shotzi? She kinda looks like a cute little booger… you know, with the green hair?” Kayla wishes Zelina the best of luck tonight, and the show moves on.

⁃ Ryan and Matt make a quick Draft Kings plug, and take a look at the free WWE Money in the Bank pool.
⁃ The crew previews a few more matches, until Kayla brings on the final guest.

“Johnny drip-drip” joins the host’s, and he’s fresh as always. Kayla kicks off the interview by asking John how he feels after his match on Monday, and Morrison tells her “I’m feeling sore. I feel like most pro wrestlers walk around with their spines held together by tape, but when you look up and see that briefcase, suddenly, nothing hurts anymore. You just think of the possibilities.” Evan wonders if The Miz has given John any advice ahead of tonight’s match, and John tells him “yeah man all kinds of strategy, but I can’t just give it out… I know everyone’s listening. I want to remain like the ocean, mysterious and deep.” Ryan jumps in, and he wonders if Morrison’s past experiences with ladder matches will help him tonight. Morrison recalls his first time in a ladder match, and tells viewers “my first ladder match was against Jeff Hardy, 15 years ago. I thought about it today, and I thought wow, we have been doing this a long time. When it comes to Money in the Bank, Johnny Nitro didn’t really know what to do, but John Morrison has experience, and that will give me the edge tonight.” Matt recaps all of Morrison’s highlights in Money in the Bank matches, and asks which spot hurt the most. John says they all did, before telling Matt “last years Wrestlemania… that was one of the most painful moments in a ladder match. But I won, and when you win you don’t feel anything… until like an hour later, but you know.” Matt brings up Morrison’s nickname, and warns John that water and ladder’s may not mix well. Morrison says he hasn’t thought about that until now, and tells Matt “I’ve been worried about the other guys slipping off of the ladder. Think about that! They will be slipping and sliding all over the place after I touch the ladder… Good luck Big E! Good luck Drew McIntyre!” Kayla plays a quick game of “drip or drab” with John, and wishes him good luck tonight, until the interview comes to a close.

⁃ Matt, Evan, and Ryan make their predictions for each of tonight’s matches, until Kayla sends the show off air.

That’s all for this episode of The Bump! Enjoy Money in the Bank!