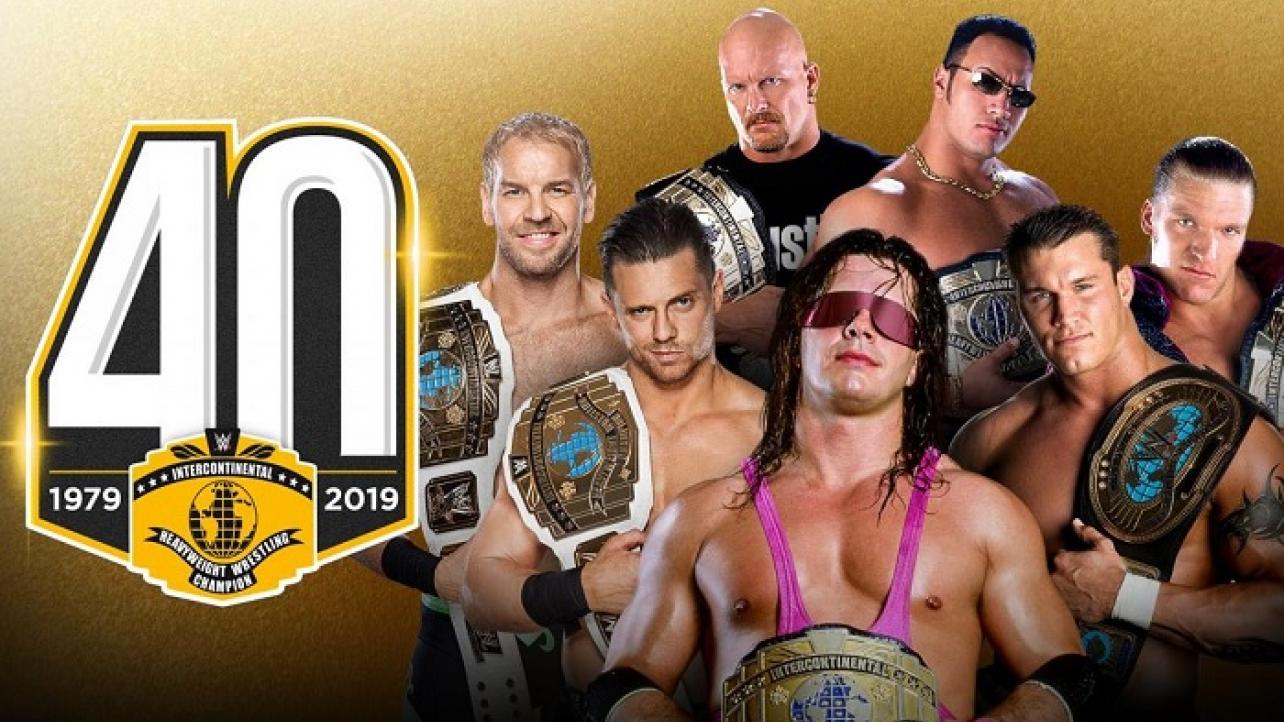 WWE has announced the upcoming week will mark the 40th Anniversary Week of the WWE Intercontinental Championship.

The title was introduced to WWE on September 1, 1979, as WWE Hall Of Famer Pat Patterson is credited as being the first WWE Intercontinental Champion on record after winning a tournament in Rio de Janeiro, Brazil.

On WWE.com, the company released the following to celebrate 40 years of the Intercontinental Championship in WWE.

On Sept. 1, 1979, Pat Patterson made history when he won a tournament in Rio de Janeiro, Brazil, to become WWE’s first-ever Intercontinental Champion. Now, 40 years later, we honor the incredible legacy of this prestigious title, held by some of the most captivating Superstars in all of sports-entertainment.

WWE Playback with Shawn Michaels, Jeff Jarrett & Road Dogg
Join WWE Hall of Famers Shawn Michaels, Jeff Jarrett and Road Dogg as they relive Double J’s Intercontinental Championship defense against The Heartbreak Kid at WWE In Your House 2, a bout that kick-started Michaels’ third reign with the coveted title and signaled the end of the partnership between Jarrett and his then-Roadie.

WWE Top 10: Emotional Intercontinental Title victories
From Ricky Steamboat’s landmark victory over “Macho Man” Randy Savage at WrestleMania III to Zack Ryder’s dream-come-true Show of Shows win 29 years later, capturing the Intercontinental Championship has a habit of bringing emotions to the surface for any Superstar. WWE Top 10 ranks the most heart-wrenching wins in the title’s history.

Intercontinental Championship 40th anniversary roundtable with Randy Orton, Christian and The Miz
Cathy Kelley sits down with The Viper, Captain Charisma and The A-Lister to recap their own personal history with the Intercontinental Championship, their most memorable rivalries and matches involving the coveted prize and the title’s place in the annals of sports-entertainment. The roundtable begins streaming on WWE’s official Facebook, Twitter and YouTube channels at noon ET.

The #40thAnniversary of the #WWE #Intercontinental #Championship is upon us, and with it will come an entire week of special programming on the #WWENetwork & @WWE #socialmedia outlets

WWE is celebrating the INCREDIBLE 40-year legacy of the #ICTitle all week on its digital and social channels!https://t.co/AVWahDcugY

The marathon, hosted by former champion @ZackRyder, begins at 1 p.m. ET and will feature legendary bouts and instant classics with the likes of @ShawnMichaels, @TheRock, @RandyOrton, @WWERollins and so many more! #ICTitlehttps://t.co/79EoZho8Wa

Celebrate the 40th anniversary of the prestigious #ICTitle with a marathon of 20 of the greatest matches ever. Streaming THIS SUNDAY at 1/12 C on @WWENetwork! pic.twitter.com/yoS6Cm6aYd