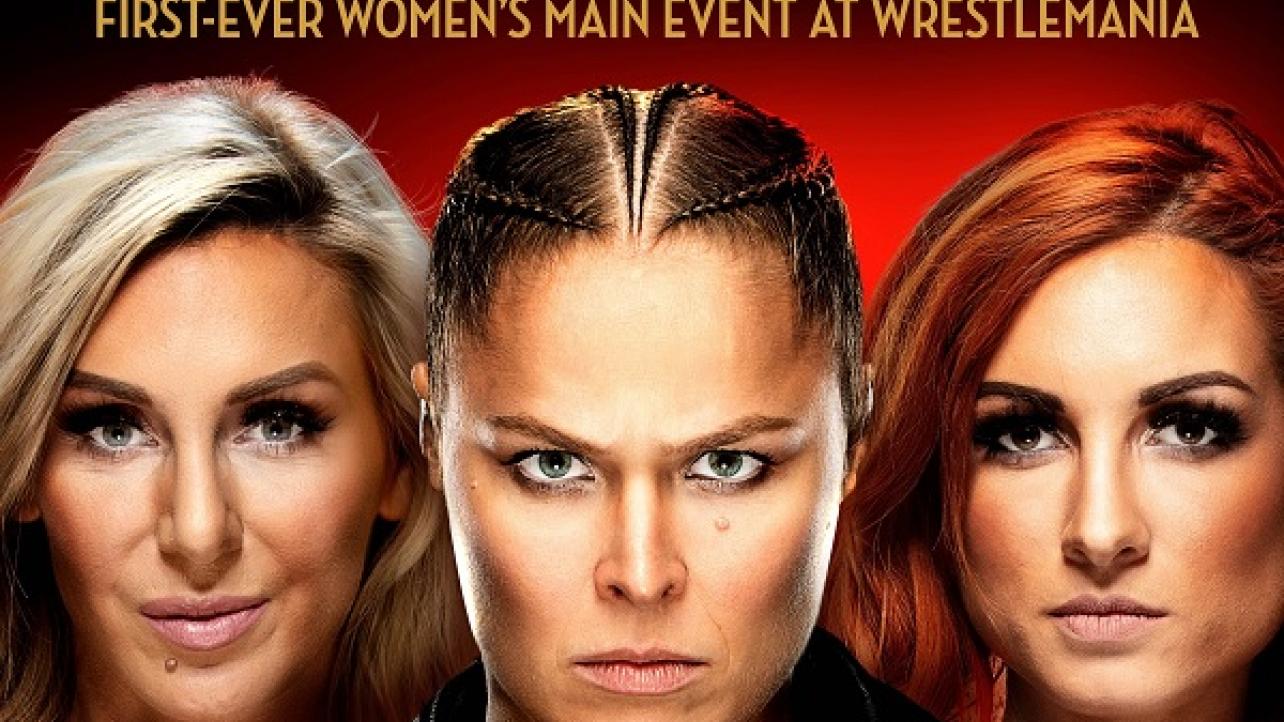 WWE announced that for the first time in history, a women’s match will headline their biggest annual event, as the RAW Women’s Championship Triple-Threat Match with Ronda Rousey defending against Becky Lynch and Charlotte Flair will be closing the show at WrestleMania 35 next month.

The following press release was issued on Monday morning:

STAMFORD, Conn.–(BUSINESS WIRE)–For the first time in WWE history, a women’s match will be the main event of WrestleMania as the Raw Women’s Championship featuring Ronda Rousey (c) vs. Charlotte Flair vs. Becky Lynch will take place on Sunday, April 7 in front of a capacity crowd at MetLife Stadium and streaming live on WWE Network around the world.

Ronda Rousey is the current Raw Women’s Champion, Olympic medalist, the first female UFC Champion, and the first woman to be inducted into the UFC Hall of Fame. She is also an actress and New York Times bestselling author. Charlotte Flair is a seven-time Champion in WWE, a former Division 1 volleyball player, philanthropist and author. She is the daughter of two-time WWE Hall of Famer Ric Flair. Becky Lynch is the 2019 Women’s Royal Rumble winner, a two-time SmackDown Champion and was named Wrestler of the Year by both Sports Illustrated and CBS Sports in 2018. She was also the first woman ever to top ESPN’s WWE Power Rankings.

At WrestleMania 32 in 2016, WWE re-branded the Divas Division the Women’s Division and unveiled a new Women’s Championship title. Since that time, the women’s evolution has placed a greater spotlight on WWE’s female performers, including more prominent storylines and deeper character development that showcases their athleticism, charisma and star power.

Make sure to join us here at eWrestling.com on 4/7 for live play-by-play results coverage of WrestleMania 35

BREAKING: #WrestleMania 35 will feature the first-ever women’s main event when @RondaRousey, @BeckyLynchWWE, and @MsCharlotteWWE battle for the #RAW #WomensChampionship! https://t.co/kZvtY1hUo3

Breaking: For the first time in @WWE history, a women’s match will be the main event of @WrestleMania! The historic Raw Women’s Championship match featuring @RondaRousey @MsCharlotteWWE @BeckyLynchWWE will take place on Sunday, April 7 at @MetLifeStadium and live on @WWENetwork pic.twitter.com/rPkvWtuaCZ