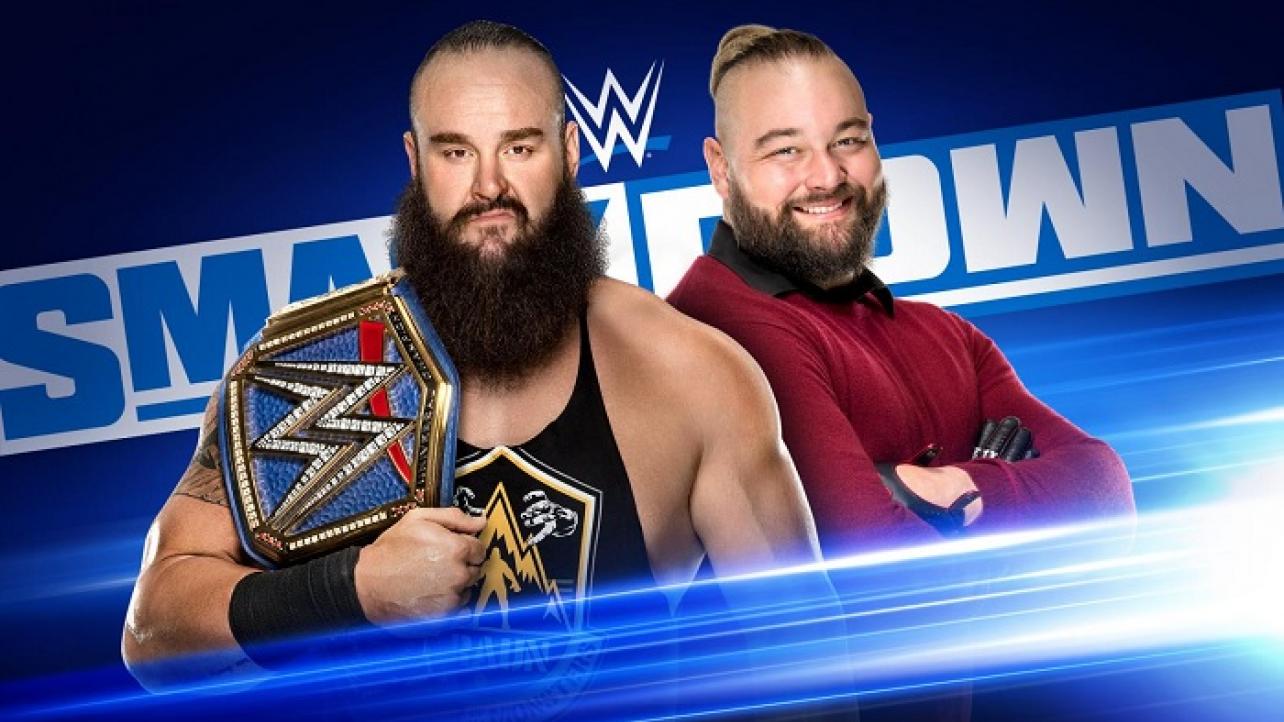 WWE returns this evening with their Money In The Bank “go-home” edition of Friday Night SmackDown.

Braun Strowman and Bray Wyatt will come face to face ahead of their Universal Championship Match, Mandy Rose and Sonya Deville look to settle old scores and Jeff Hardy is ready to ignite his comeback on the final SmackDown before WWE Money In The Bank.

Universal Champion Braun Strowman and Bray Wyatt share a storied past and are on a brutal collision course at WWE Money In The Bank. What will happen when the two combatants come together just two nights before their title showdown?

Wyatt has been content with sending messages to his former family member from the comfort of his Firefly Fun House abode, but Strowman is tired of the puppet show. The Universal Champion invited the twisted Superstar to come find him and meet face to face tonight on Friday Night SmackDown.

What message will Wyatt have in store for his former “Black Sheep” in person?

Tune in to SmackDown at 8/7 C on FOX to see if the tensions boil over tonight.

There’s plenty to still be written in Jeff Hardy’s WWE story, and the next chapter begins tonight on Friday Night SmackDown.

The Charismatic Enigma made his return to action earlier this year by defeating King Corbin on the blue brand in his first match of 2020. In recent weeks, Michael Cole has led the promotion of Hardy’s WWE journey and set the stage for the former WWE Champion to reestablish himself on the blue brand. Only one problem: No one cleared that plan with Sheamus, as The Celtic Warrior has voiced his frustrations and anger with the ongoing Hardy tributes.

What will be in store when the iconic highflyer makes his return, and will Sheamus be far behind?

Tune in to SmackDown at 8/7 C on FOX to see Hardy back in action.

Last week, Sonya Deville wasn’t going to wait for Mandy Rose to hear her out, and now the time for talking is over, as they’ll battle in the ring.

Deville inserted herself into her former best friend’s Money in the Bank Qualifying Match against Carmella, and the distraction led to Rose’s elimination from the career-altering event. Deville’s devious plan didn’t end there, as she viciously attacked Rose after the match ended.

With Otis’ devoted love and Dolph Ziggler’s scheming ways looming over the battle, there’s sure to be plenty of fireworks when the former Fire & Desire members face off.

Tune in to SmackDown at 8/7 C on FOX to see where this extremely personal rivalry heads next.

Tamina to team up with Lacey Evans against Bayley & Sasha Banks

For Tamina & Lacey Evans, the saying “the enemy of my enemy is my friend” has never been more meaningful in a matchup against Bayley & Sasha Banks.

A SmackDown Women’s Championship opportunity awaits Tamina, as she’ll face off with Bayley at WWE Money In The Bank, while The Sassy Southern Bell’s rivalry with The Boss hit a whole new level when Evans knocked Banks out of qualifying with a Woman’s Right.

Will Bayley & Banks continue to coexist as the blue brand’s role models, or can Tamina & Evans sew more dissent in their ranks?

Tune in to SmackDown at 8/7 C on FOX to see who comes out on top.

Before Daniel Bryan and King Corbin risk it all in the Money in the Bank Ladder Match, they’ll attempt to settle their recent dispute in grand fashion.

Bryan & Drew Gulak will look to a mystery partner to battle King Corbin, Shinsuke Nakamura & Cesaro in a massive battle. Corbin has asserted his reign over SmackDown in recent weeks with the help of The Artists Collective, repeatedly attacking the two skilled training partners.

Who will emerge in Bryan & Gulak’s corner to even the odds?

Tune in to SmackDown at 8/7 C on FOX to see how it all goes down.