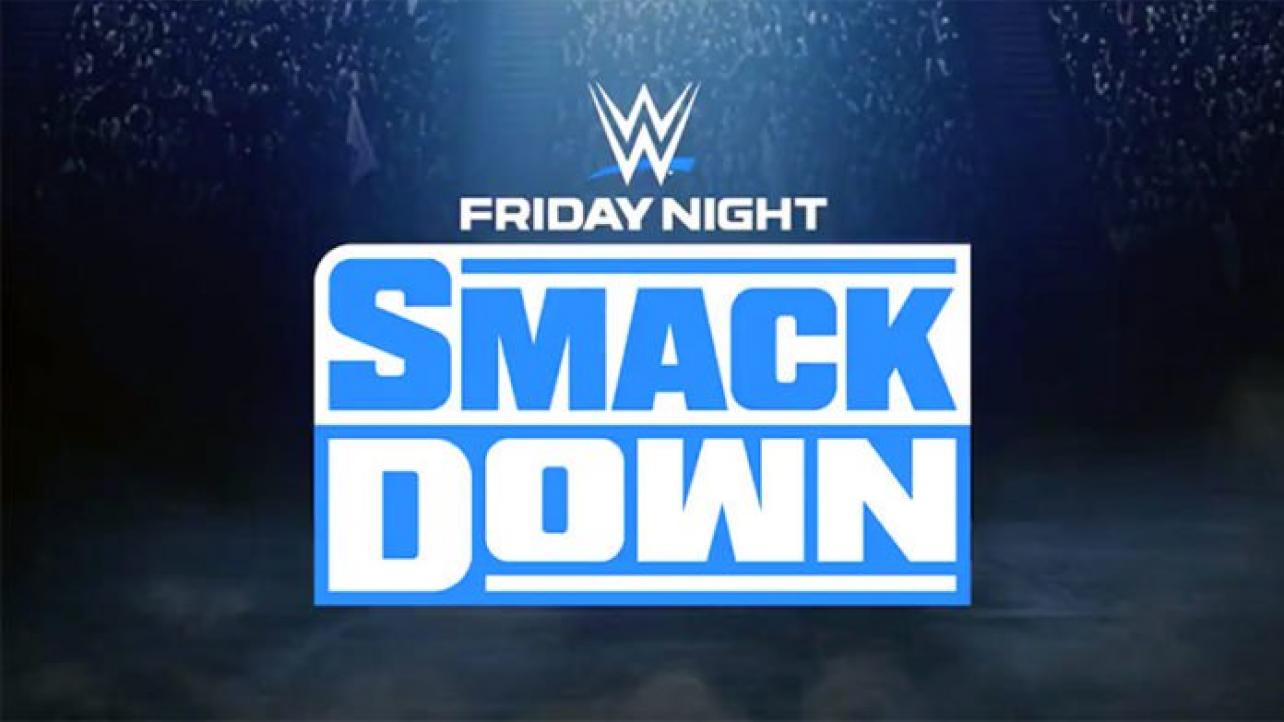 The December 13, 2019 edition of WWE Friday Night SmackDown aired live on FOX from the Fiserv Forum in Milwaukee, WI.

– Dolph Ziggler comes out to the ring, and then he’s joined by Baron Corbin. They talk about dumping the dog food on Reigns last week, and Corbin says he is going to make Reigns bow down to his rightful king. Corbin says if Reigns shows up tonight and tries to attack him, he will run into Corbin’s security and will suffer a fate far worse than last week. Corbin says SmackDown doesn’t want Reigns back, and the whole locker room feels that way. Dolph Ziggler agrees and talking about Corbin putting down The Big Dog. The New Day comes out to interrupt.

Big E talks about Corbin wearing a Burger King crown and ruling his imaginary kingdom on SmackDown. Corbin and Ziggler exchange insults with The New Day, and Kofi and Big E hit the ring now. Kofi says Corbin has no class and what he did to Roman Reigns last week was disrespectful. Corbin says Kofi only had one lucky day in his whole 11 year career when he won the WWE Title, and Kofi slaps Corbin across the face. Corbin says if Kofi wants to step up and be a locker room leader like Roman Reigns, then Kofi is going to get humiliated like Reigns did. Corbin and Ziggler leave.

– Still to come: An interview with The Miz.

– Back from the break, we see Baron Corbin and Dolph Ziggler approaching his locker room. Corbin’s security guards are down, and the room is trashed, and Ziggler asks who could have done this.

– Alexa Bliss and Nikki Cross are backstage for an interview at the Gorilla position. Suddenly Mandy Rose and Sonya Deville ambush them from behind, and they brawl out on to the stage. Referees separate them and try to restore order for their tag team match coming up next.

– Mandy Rose & Sonya Deville vs. Alexa Bliss & Nikki Cross: The opening bell sounds and they all go at it in the middle of the ring. Mandy pokes Nikki in the eyes and then Sonya tags in. She drops Nikki, then Mandy tags back in for the double team on Nikki. Mandy hits a running knee to the face for a two count. Sonya tags back in for a double team, but Alexa takes out Mandy, and Nikki gives Sonya the swinging neckbreaker. Nikki pins for the three count.

– Sami Zayn is shown walking backstage. Heavy Machinery approaches him with a Christmas gift. Sami unwraps it, and it’s a giant baked ham. Sami says this is the worst gift he’s ever gotten in his life. Sami says he is a vegan and this is the slaughtered flesh of a poor animal. Otis apologizes but Sami doesn’t accept his apology and mocks Otis. It looks like Heavy Machinery has heard enough. Cesaro and Nakamura walk up next to Sami, and Sami tells Heavy Machinery they’ll see them in the ring later. Cesaro smashes the baked ham before they leave, and Heavy Machinery doesn’t look happy.

– Shorty G & Ali vs. The Revival: Wilder trips on a part of the stage on his way out to the ring. Shorty and Wilder start off trading holds, then Dawson tags in and hits a cheap shot on Shorty G. G falls out to ringside, and Ali comes to check on him, but Dawson drops Ali on the floor. The Revival slams Shorty face-first into the announce table, then takes him back in the ring for a two count. Shorty starts fighting back, but Wilder is able to shut him down with a backbreaker. Dawson tags in for a Doomsday Device-type double team, but it looks like Shorty G reversed it and landed on top of Dawson. Ali runs in and takes out Wilder. Dawson gets dumped out to ringside next, then G and Ali hit suicide dives in tandem on both Revival members at ringside. Back in the ring, Shorty and Ali hit a double team suplex/stomp off the top on Dawson for a two count. Wilder runs in and takes out Ali, then Shorty takes out Wilder. Dawson hits a sit-out powerbomb on Shorty for a two count. Dawson misses a shot and Shorty comes back with a German suplex. Wilder breaks it up, then Ali hits a 450 splash on Wilder. All four men are down. Wilder tags in, and Ali misses a shot off the turnbuckle. The Revival catch Ali off the turnbuckle in the Shatter Machine for the three count.

– SmackDown Women’s Champion Bayley is backstage for an interview. Bayley says she wasted years of her career doing what the people want, and she does what she wants now, and her Championship speaks for itself. Bayley mentions that Sasha is not here tonight because she’s recording a rap album. Bayley hears Elias’ guitar from off-camera, and she storms over to tell him to stop interrupting her time. We see Elias with Dana Brooke, and Elias says he wrote a song for Bayley for Christmas. Elias sings a song saying that Bayley’s face haunts his dreams, and he turned down a threesome with Bayley and Sasha Banks. Elias sings that Bayley looks like a dude with her new haircut. Bayley says that’s not funny and she tells Dana Brooke to meet her in the ring when she’s done being a groupie.

– Bayley vs. Dana Brooke: This one is a non-Title match. Bayley slaps Dana in the face right off the opening bell. Dana fires back and dumps Bayley out to ringside. Dana hits a kick at ringside, then back in the ring she hits a handstand back elbow. Bayley fights back with a kick and tries to keep Dana grounded. Bayley takes Dana to the top turnbuckle, but Dana reverses it into a sunset flip powerbomb for a two count. Bayley grabs the ropes and kicks out Dana’s knee. Bayley hits a facebuster for the three count.

– We go to a video package looking at the recent feud between The Miz and Bray Wyatt, stemming from the disappearance of Daniel Bryan.

– Up next: Renee Young interviews The Miz at his house.

– We see a promo video for Sheamus’ upcoming return. He says SmackDown has become full of wimps and weaklings in his absence.

– We go to an interview filmed earlier day with The Miz at his house. The Miz says he still hasn’t seen or heard from Daniel Bryan since The Fiend pulled Bryan under the ring. Miz says he may not like Bryan, but he respects him, and Bray Wyatt went too far. We hear Maryse yelling off camera. She holds up a video baby monitor and shows Bray Wyatt cutting on to the screen, and then it cuts back to Miz’s baby and Bray’s puppets are with her now. Miz and Maryse run into the baby’s room and there is no sign of Wyatt, and only one of the puppets remains in the crib. The Miz and Maryse tell the camera crew to leave.

– We go back to the arena, then a new episode of The Firefly Fun House comes out. Bray has a doll that looks like the one he left in the crib at The Miz’s house. Wyatt says Daniel Bryan is still with “him.” Wyatt says he used to be sick, but he’s not anymore, and he says pain is not a real thing. He says pain is just a reaction in your brain, and you can train yourself not to feel pain. Wyatt says he can teach you how, you just have to let him in. He says he’ll see Miz at TLC.

– Corbin and Ziggler are backstage, and they find Corbin’s throne trashed and more of his security guards laid out.

– Heavy Machinery vs. Cesaro & Shinsuke Nakamura: Sami Zayn is at ringside. Heavy Machinery is in good shape in the opening moments of this one as they overpower their opponents. Otis misses a shot and Nakamura fires back with a spinning heel kick. Cesaro tags for the double team, but Tucker also tags himself in. Tucker hits a Swanton bomb onto both Shinsuke and Cesaro in the ring. Tucker and Otis double team Cesaro and clear the ring. Back in the ring, Cesaro and Nakamura are able to isolate Tucker and keep him grounded. Otis comes in and cleans house. He looks for the Caterpillar on Cesaro, but Sami causes a distraction. Cesaro dumps Otis outside from behind, then Nakamura hits the Kinshasa on Tucker for the three count.

– Baron Corbin vs. Kofi Kingston Ziggler is at ringside, and so are some of Corbin’s security guards. Kofi takes Corbin out to ringside early on and hits a big dive on him. Back in the ring, Corbin turns it around on Kofi and starts beating him down. Kofi finally fights back and hits the Boom Drop on Corbin. Ziggler grabs Kofi’s leg from ringside, and he gets ejected from ringside. Ziggler comes back, and this turns into a brawl at ringside with Big E getting involved. Referees come out to try and pull them apart. Big E gets on the mic and says let’s turn this one into a tag match right now.

– Kofi Kingston & Big E vs. Dolph Ziggler & Baron Corbin: Ziggler starts off in control of Big E in the opening moments of this one. Corbin tags in and continues the offense. Big E finally fights back with a suplex, then Kofi gets the the tag. Kofi starts mounting some offense, but then he runs into a lariat from Corbin. Ziggler throws handcuffs in the ring at Corbin, and Corbin cuffs Kofi. The ref calls for the bell.

Winners via DQ: The New Day

– Kofi tries to fight them off, but Ziggler and Corbin take Kofi out to ringside and handcuff him to the ring post. The Revival comes out to help and they lay out Big E. Corbin and Ziggler have some dog food now. Roman Reigns suddenly comes out and drops all of Corbin’s security, then he starts brawling with The Revival. Reigns fights them off and starts dropping people left and right. He takes out Corbin, then grabs the dog food can and stalks Corbin. Ziggler comes out of nowhere and drops Reigns with a superkick. Ziggler sets up a ladder and the Revival helps. Reigns fights off the Revival, then he chokeslams Ziggler off the ladder through the announce table at ringside. Corbin retreats, and Reigns unhangs Kofi from the ring post. Reigns and Corbin talk trash from the ring to the stage as SmackDown goes off the air.