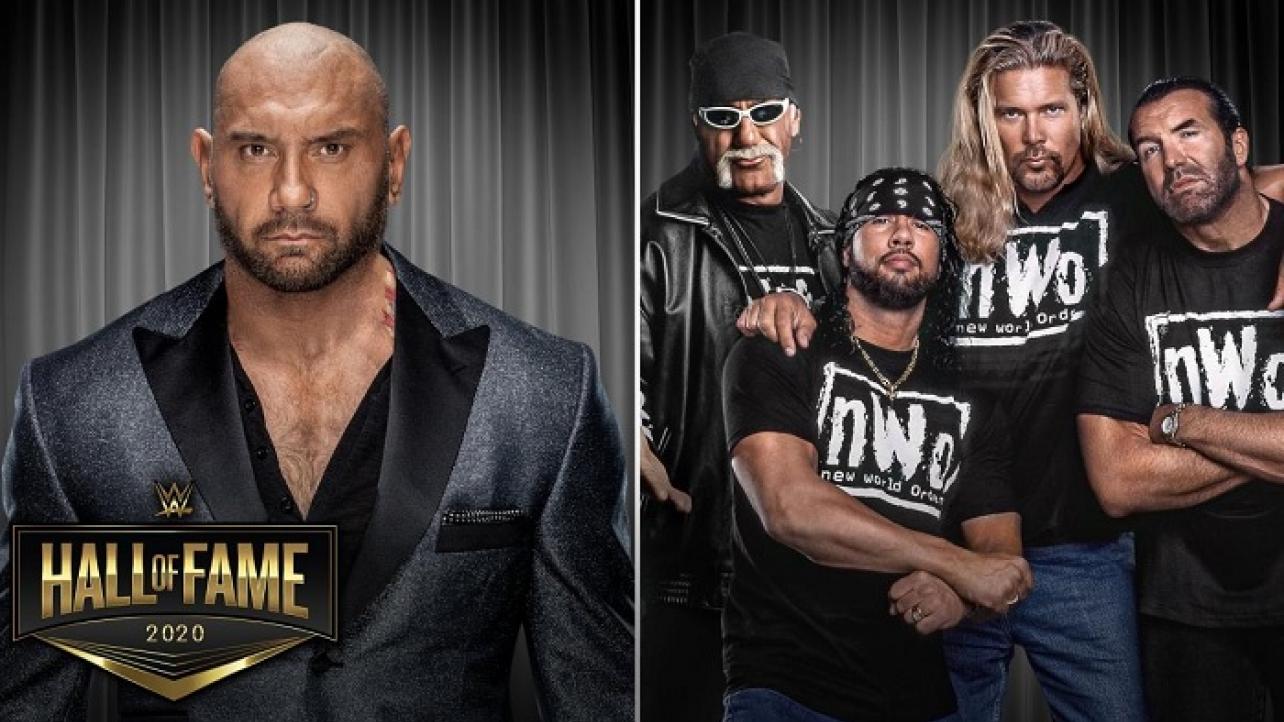 WWE Hall Of Fame 2020: Batista & nWo To Be Inducted During WrestleMania 36 Weekend In Tampa

The New World Order (nWo) — Hulk Hogan, Kevin Nash and Scott Hall, as well as Dave Bautista, have been announced as inductees into the WWE Hall Of Fame for next year’s class during WrestleMania 36 Weekend.

Batista and nWo members “Hollywood” Hulk Hogan, Scott Hall, Kevin Nash and Sean Waltman are the first inductees in the WWE Hall of Fame’s Class of 2020. They will take their place in sports-entertainment history during the 2020 WWE Hall of Fame Induction Ceremony on Thursday, April 2 at Amalie Arena in Tampa Bay, Fla. as part of WrestleMania 36 Week.

News of the inductions was first reported by People and ESPN. Batista is a six-time World Champion and a pop culture phenomenon. Throughout his illustrious career, “The Animal” had memorable rivalries with some of the biggest names in WWE history including John Cena®, Triple H and The Undertaker. Batista is also a founding member of the revolutionary faction Evolution alongside Ric Flair, Triple H and Randy Orton. At WrestleMania this past April, Batista competed for the final time against Triple H. Outside the ring, Batista has successfully conquered Hollywood, appearing in “Spectre”, “Stuber and Marvel’s blockbuster “Guardians of the Galaxy” and “Avengers” films.

One of the most innovative and controversial factions in sports entertainment history, the New World Order (nWo) was led by “Hollywood” Hulk Hogan, Scott Hall, Kevin Nash and Sean Waltman. The group captivated fans around the world and was crucial to the success of WCW during the historic Monday Night War. With an innovative style and attitude, the nWo participated in memorable rivalries against some of the biggest names in WCW history, including Sting, Diamond Dallas Page and Lex Luger. With The nWo’s induction, all four members will become two-time WWE Hall of Fame inductees.

“Batista was one of the fastest rising stars ever in WWE with an incredible list of accolades, and the success of the nWo changed the course of sports entertainment history,” said Paul “Triple H” Levesque, WWE Executive Vice President, Talent, Live Events & Creative. “It is only fitting that they all take their rightful place in the WWE Hall of Fame.”

Tickets for the 2020 WWE Hall of Fame Induction Ceremony will be available this Friday, Dec. 13 at 12 p.m. ET through all Ticketmaster outlets, www.ticketmaster.com or at ReliaQuest Ticket Office at Amalie Arena. All tickets are subject to service charges and facility fees.

WWE Hall Of Fame 2020: Batista & nWo To Be Inducted During WrestleMania 36 Weekend In Tampa