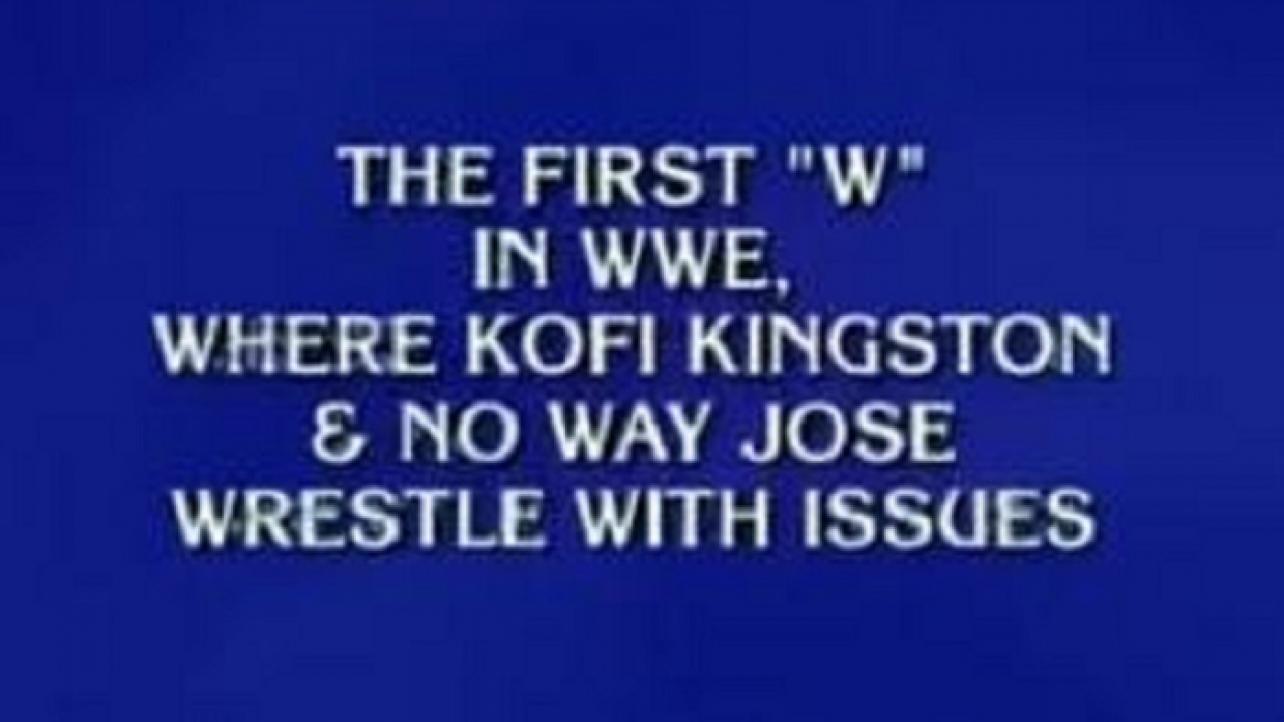 A very interesting reference to WWE was made during the Thursday, April 30, 2020 episode of the long-running popular television game show, “Jeopardy!”

The worldwide sports entertainment conglomerate was featured in the “What Does It Stand For?” category from the “Double Jeopardy!” round.

Contestant Kevin Curran, an attorney from the Chicago, Illinois area, selected $400 from the “What Does It Stand For?” category, which prompted the following:

“The first ‘W’ in WWE, where Kofi Kingston and No Way Jose wrestle with issues.”

Curran responded with, “What is ‘World’?,” which was the correct response for the ‘W’ in ‘World Wrestling Entertainment (WWE)’.

No Way Jose was included in the recent WWE Black Wednesday talent cuts, which included over 30 WWE Superstars being released from the company in a single day back on April 15, 2020.

Kofi Kingston is currently one-half of the SmackDown Tag-Team Champions as part of The New Day group that includes Big E. and Xavier Woods.

Kingston took to social media to comment on being referenced on the legendary television game show on Friday afternoon. He wrote the following:

“So…last night, Alex Trebek said my name. I’ve probably watched this clip at least 50 times. Mamma, we made it! Life is so wonderfully weird…”

Check out the video clip of Alex Trebek reading the aforementioned WWE and Kofi Kingston/No Way Jose reference on Thursday’s episode of “Jeopardy!” below. The reference comes up at approximately the 15-minute mark of the YouTube video embedded below.

Also below is an old reference to WWE Chairman Vince McMahon from a 2019 episode of “Jeopardy!”

Don’t let @VinceMcMahon‘s Jeopardy! clue distract you from the fact that in 1998, the Undertaker threw Mankind off Hell in a Cell, and he plummeted 16 feet through an announcer’s table. #YoureOnJ! pic.twitter.com/VcU5m9Ky4z