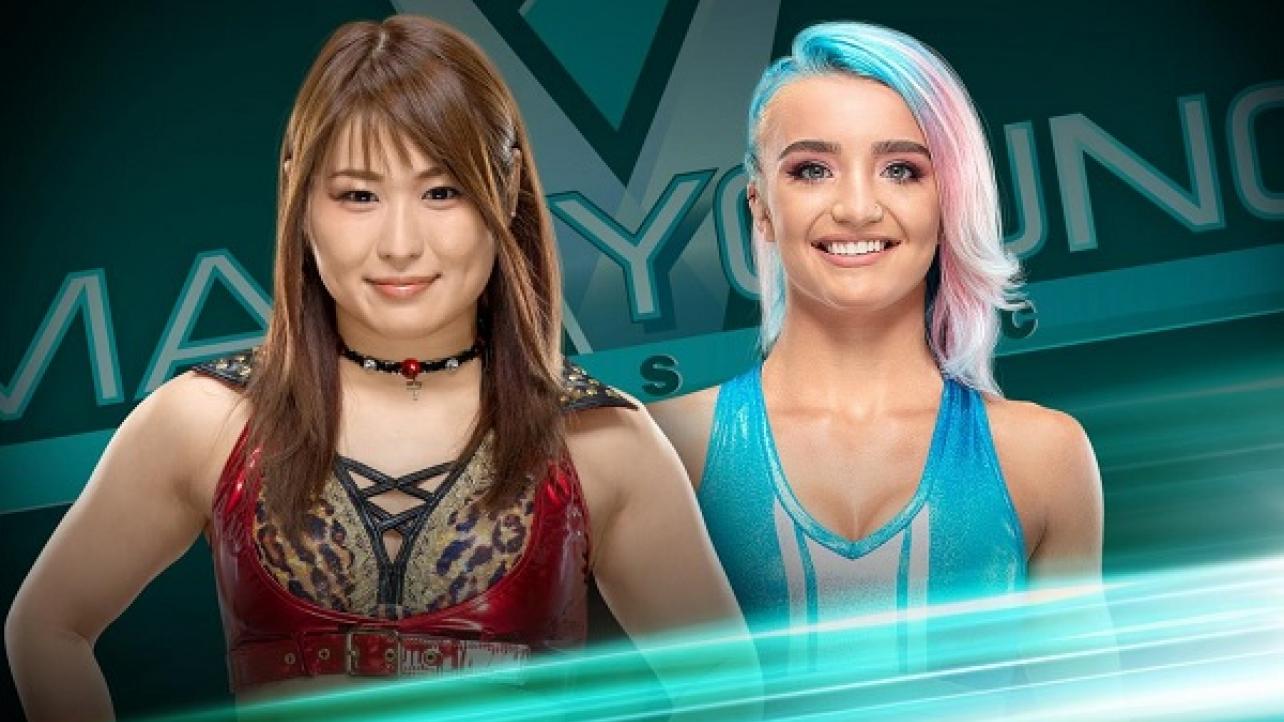 In addition to 205 Live and NXT, the latest weekly episode of the Mae Young Classic tournament goes down this evening on the WWE Network.

The First Round of the Mae Young Classic wraps up with four high-octane bouts, including the WWE debut of arguably the world’s best wrestler, “The Genius of the Sky” Io Shirai, as she takes on second-generation grappler Xia Brookside.

The WWE Universe will get to see if the Io Shirai hype is real when the Japanese sensation, one of the highest-profile signings in WWE history, makes her hotly anticipated debut against 19-year-old Englishwoman Xia Brookside.

Having already cemented her legacy in her native country, The Genius of the Sky is expected to bring a dazzling aerial game to this year’s Mae Young Classic and, if all goes according to her plan, follow in the footsteps of longtime ally Kairi Sane, who won the inaugural Mae Young Classic.

As the youngest competitor in the tournament (with a remarkable pedigree as the daughter of European wrestling legend Robbie Brookside), Brookside enters the First-Round Match with plenty to prove. The world-traveled wunderkind will have her chance to make a name for herself when she goes up against one of the favorites in the tournament.

Conceding that she was too doe-eyed and passive in last year’s tournament, Evers vows to be laser-focused this time around. A powerlifting champion who regularly tours the rigorous Japanese circuit, The One-Woman Minnesota Wrecking Crew (who happens to be the daughter of WWE Hall of Famer Paul Ellering) doesn’t shy away from delivering or receiving big hits.

That’s good news considering her opponent is the wildly energetic and supremely dangerous Matsumoto. Don’t let Matsumoto’s fun-loving demeanor fool you. Lady Godzilla might smile a lot when she’s in the ring, but it’s only because she’s doing what she loves most: destroying opponents (preferably by way of her signature move, the head-crumbling Rock Drop).

Which heavy hitter will score the W and move on to round two?

Two of NXT’s fastest-rising Superstars will collide when the endlessly athletic Jessie Elaban takes on Brazilian judoka Taynara Conti. When it comes to personality types, the two Superstars couldn’t be more different: Elaban is a proudly quirky individual who unashamedly describes her in-ring style as “glumsy” (a combination of goofy and clumsy), while Conti is a stern and hard-edged competitor who has little tolerance for such silliness.

Yet, Elaban and Conti have more in common than meets the eye. Both possess otherworldly athletic credentials (Elaban was a collegiate volleyball star; Conti holds a black belt in judo), both are relative newcomers to the squared circle, and both have been identified as up-and-comers with limitless potential. The first step toward sports-entertainment immortality awaits in the First Round.

Nicole Matthews might be forgiven for carrying a chip on her shoulder. The Canadian ring veteran — one of the most respected and battle-tested competitors of the North American independent scene for the past decade — was relegated to alternate status in last year’s Mae Young Classic, a fact Matthews considers nothing short of an injustice. Now that she finally has her chance to show her skills on WWE Network as an official competitor in this year’s tournament, the rule-breaking mauler plans to make it count.

Scottish sorceress Isla Dawn will do everything in her power to ensure that she, and not Matthews, is the talk of the WWE Universe after they clash in the First Round. Dawn’s résumé might be shorter than Matthews’, but what she lacks in comparative ring experience she more than makes up for with vicious kicks. Will Dawn’s striking prowess pave the way to victory, or will Matthews prove once and for all that she deserves recognition as one of the world’s elite wrestlers?