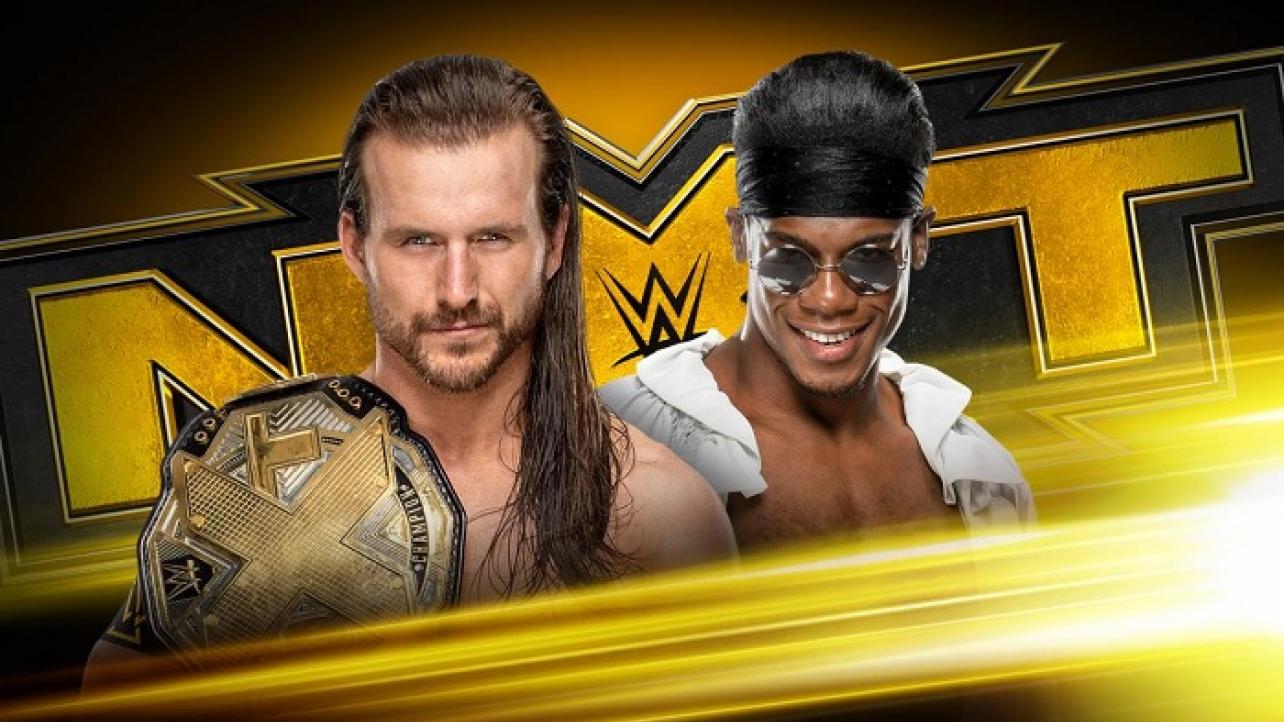 The Velveteen Dream finally gets what he’s been after — a match with Adam Cole for the NXT Title. Charlotte Flair will also defend the NXT Women’s Championship against Io Shirai, Karrion Kross makes his in-ring debut with Scarlett, Finn Bálor calls out his assailant and Dominik Dijakovic clashes with Johnny Gargano this Wednesday night on USA Network at 8/7 C!

After weeks of prodding, mind games and more, The Velveteen Dream gets his NXT Championship opportunity against Adam Cole this Wednesday night.

Cole remains insistent that His Purple Highness doesn’t even deserve the chance he’s getting, though that’s not keeping The Panama City Playboy from promising another successful title defense.

But Dream already owns a pinfall victory over Cole, having defeated the champion in a tag team match last month. Can Velveteen make it happen again and bring the longest NXT Title reign in history to an end, or will be it be dream over for his golden aspirations? Be sure to catch NXT this Wednesday night at 8/7 C on USA Network to find out!

Charlotte Flair re-ascended to her throne as NXT Women’s Champion by knocking off Rhea Ripley at WrestleMania, but just how long will The Queen’s second reign last?

Her first defense comes tonight against Io Shirai. The Evil Genius of The Sky earned her opportunity by winning a Six-Woman Ladder Match.

A stalwart of the black-and-gold brand since her arrival, Shirai has made it clear that she bows to no one, and she showed no signs of intimidation when confronting The Queen last week.

Can Shirai soar to the title, or will Charlotte send her to the back of the line?

With a suspect list that stretches a mile, Finn Bálor is nevertheless to determined to solve the mystery of who laid him out with a heinous sneak-attack in the backstage area two weeks ago.

The Prince recently engaged in a tense war of words with The Velveteen Dream and was scheduled to face him prior to being ambushed, he has been at odds with United Kingdom Champion WALTER and the rest of Imperium, and he has long-standing issues with several other prominent NXT Superstars, including Undisputed ERA, Johnny Gargano and more.

Bálor has already vowed to call out his attacker this week on NXT, but will the mystery assailant have the temerity to reveal himself to the NXT Universe and look the steely-eyed Bálor in the face? Could fisticuffs between Bálor and his attacker be far behind? Find out tonight at 8/7 C on USA Network!

After issuing foreboding warnings for months, Kross will finally show the NXT Universe what he’s capable of inside the squared circle. We’ve already been given a brutal sneak peek, as Tommaso Ciampa hasn’t been seen since Kross and Scarlett ambushed him last month.

Why they targeted The Blackheart is still unclear. But make no mistake: Kross figures to have bad intentions in store for his first opponent.

When he’s not excessively boasting about becoming the first Triple Crown winner in NXT history, fawning over a chicken dinner prepared by Candice LeRae or waxing poetic about why he and his wife are the only true “good people” of NXT, Johnny Gargano has found time to draw the ire of nearly every Superstar on the black-and-gold brand.

Case in point: Dominik Dijakovic. After making jaws drop with several instant classics against Keith Lee, coming within an eyelash of winning the NXT North American Title and risking life and limb inside the perilous double cages of WarGames, The Rare Breed has turned his attention to Johnny Wrestling. Dijakovic believes that Gargano is simply playing the victim, despite the fact that NXT has “put him in about 46,000 straight TakeOvers.”

Can the wily Gargano outmaneuver the towering Dijakovic? Or will Dijakovic finally give Gargano the type of beatdown that many in the NXT Universe feel he is owed? Find out tonight at 8/7 C on USA Network!