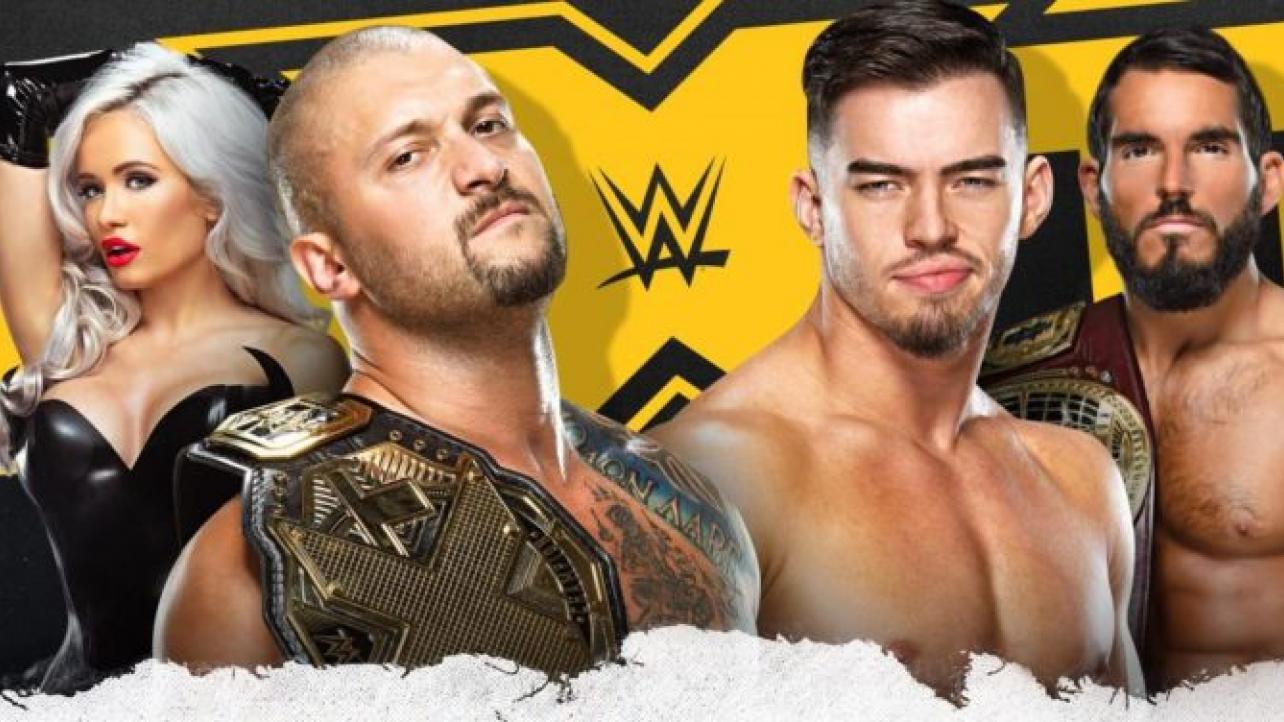 Welcome to eWrestling.com’s LIVE coverage for this week’s edition of WWE NXT, which is on it’s third consecutive week airing at it’s new Tuesday night 8/7C timeslot on the USA Network! The Tuesday, May 11th 2021 showing of the black-and-gold brand’s latest episode airs LIVE from the WWE Capitol Wrestling Center in Orlando, Florida, beginning promptly at 8:00 p.m. (Eastern Time) for an action-packed edition of NXT!

As advertised for the Tuesday, May 11, 2021 edition of WWE NXT, Two huge title clashes are on tap tonight as Raquel Gonzalez defends the NXT Women’s Championship against Mercedes Martinez, while Kushida puts the NXT Cruiserweight Title on the line against Santos Escobar in a 2-Out-Of-3 Falls Match. NXT Champion Karrion Kross will also be in action in a non-title bout against Austin Theory and much more, all tonight at 8/7 C on USA Network!

Featured below are complete results and live coverage of the Tuesday, May 11th, 2021 edition of WWE NXT On USA Network which airs live at 8/7C! The following report was written by eWrestling.com’s longest running female reporter, Jamie Rush. Follow Jamie on Twitter @JamieRush312.

Prior to the start of the Tuesday, May 11th 2021 edition of WWE NXT’s opening, we once again get a quick view of the WWE Then NOW TOGETHER opening and immediately head into the newly updated opening sequence as the opening theme song replaces Slipknot’s track with Poppy’s opening theme song! We finish the new opening video package for the black-and-gold brand to get things officially started for tonight’s show! As the video comes to an end, we head into the WWE Capitol Wrestling Center in Orlando, Florida to officially kick off tonight’s show which airs for the third week in a row at it’s all-new TUESDAY night timeslot on the USA Network!

We start tonight’s edition of WWE NXT with a video package looking back at last week’s show, including how The Way captured the NXT Women’s Tag Team Titles from Shotzi Blackheart and Ember Moon in the main event.

Inside The WWE Capitol Wrestling Center

We kick off the Tuesday, May 04, 2021 edition of WWE NXT as we head into the WWE Capitol Wrestling Center located in Winter Park, Florida for the opening of tonight’s show. We head to the announcer’s table where the NXT commentary team officially welcomes us to tonight’s edition of NXT! Vic Joseph then continues on to inform the NXT fans that tonight’s episode will kick off with the best women’s division in the world! (Joseph sits alongside WWE Hall of Famer Beth Phoenix, and last but not least, Wade Barrett all welcome us to tonight’s edition of NXT on the USA Network!)

As we rap up the welcome with the commentary team, we head right over to the ring across from the announcer’s table to get set up for the first official match up of the evening. The entrance theme for The Way sounds as Austin Theory makes his way to the stage, accompanied by the NXT North American Champion Johnny Gargano. Immediately the fans start to boo them both as they make their way down the ramp and into the ring where they finish their entrance and Theory awaits his opponent for the evening. Out next comes NXT Champion Karrion Kross with Scarlett for this non-title opener. Karrion Kross and Scarlett deliver the same unique entrance as fans cheer them on. (Theory and Gargano watch from ringside as Gargano cheers a scared Theory on.)

Austin Theory stay at ringside with fellow The Way member, Johnny Gargano as he hesitates, finally he enters the ring. The referee moves to the center of the ring as the match is set to begin, signaling for the bell. The bell rings and the match is officially underway. To start the action, Kross heads in at a still frightened Theory and misses in the corner! Austin Theory takes advantage of this as he goes to work but Kross shoves him to the mat. Theory with a dropkick but Kross eats it and fumes. Kross with a big boot to the face in the corner, sending Theory down. Kross launches Theory across the ring with ease.

At this point, Kross stares down Gargano and charges at Theory but puts the brakes on as Theory moves. Theory tries to capitalize with a clothesline but it does nothing. Kross levels him with a big clothesline of his own. Kross with big strikes in the corner and in the middle of the ring. Kross flattens Theory with another big boot. Kross uses the middle rope to choke Theory as the referee warns him. Gargano tries to encourage Theory but Kross puts boots to him and taunts Gargano. Kross keeps control but runs into boots in the corner again. Kross catches Theory with a big Doomsday Saito suplex. He goes for another one but Theory rakes his eyes as Gargano distracts the referee from the apron. Fans boo.

At this point, they go to the floor and Kross misses as he can’t see. Theory ducks a shot and sends Kross face-first into the barrier. Theory with a big DDT on the floor as the boos continue. Kross makes it back right at the 9 count. Theory stays on him and uses the ring post now. Theory brings it back in and keeps control, then mounts Kross with big lefts and rights as the boos continue, and Scarlett yells at Theory. Kross fights back but Theory rolls into a big dropkick for a 2 count. Vic confirms Bronson Reed vs. Gargano with the title on the line for next Tuesday’s show. Fans rally now as Kross eats a running clothesline in the corner.

Finally, Theory heads in on Kross and hits a big Fall-away Slam from the corner. Gargano barks orders but Kross comes back with a huge Doomsday Saito out of nowhere, and another. Kross waits for Theory to get back up, and then nails the running forearm to the back of the head.
Kross mounts Theory from behind on the mat and unloads with strikes. He then applies the Straitjacket submission and the referee calls the match, while Kross keeps his eyes on Gargano.

Immediately following the match, Kross stands tall with the NXT Title as his music hits. Scarlett joins him as he stares Gargano down. We go to replays. Finn Balor suddenly appears next to Kross in the ring as fans cheer them on. Balor is tired of waiting, he wants his rematch. Kross wants it just as bad as Balor. Kross says let’s do this. They face off in the middle of the ring until Balor makes his exit, still staring Kross down. Kross’ music starts back up as we go to commercial.