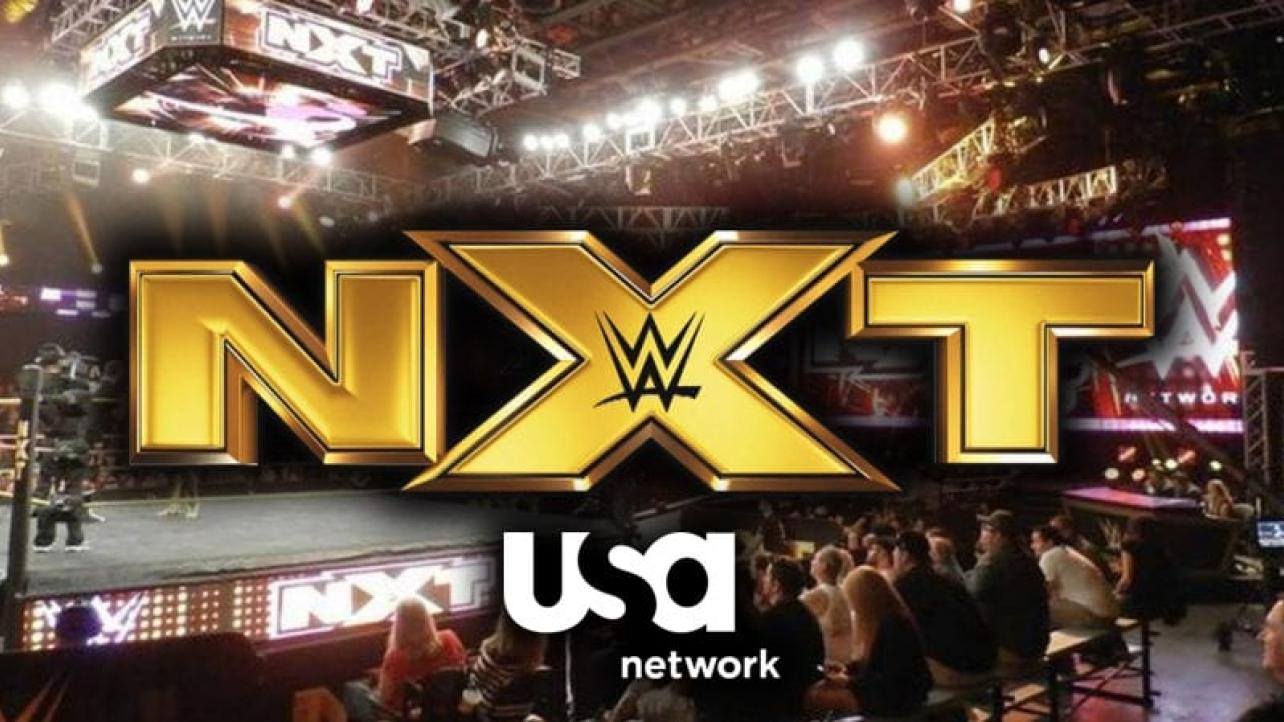 – This week’s broadcast opens up with a video package looking at what happened on last week’s show. Mauro Ranallo welcomes us to the arena, and we go to the ring

– Bianca Belair vs. Rhea Ripley: They lock up off the opening bell and test their strength in the opening moments. They trade takedowns, and then fight into the corner. Rhea goes up top, but Bianca throws her down to the mat, then stomps on her. Rhea starts fighting back, and they charge towards each other and collide in the middle of the ring. Rhea connects with a big boot to the face now. They fight briefly spills out to ringside, and Io Sharai runs out and hits a cheap shot on Rhea. Candice Larae runs out for the save and she takes out Sharai. Back in the ring Rhea hits the Rip Tide for the three count.

– We go to the announce table, where Mauro promotes tonight’s main event for the NXT North American Title.

– Pete Dunne and Tyler Bate are interviewed on their way into the building. Dunne says he’s got revenge for Damien Priest, and he’s not concerned about Killian Dain.

– Back from the break, we see a video looking at Tommaso Ciampa’s return.

– Tyler Bate is shown sitting at ringside in the crowd.

– Matt Riddle vs. Cameron Grimes: Grimes looks for his running stop off the opening bell, but Riddle dodges it. Riddle looks for the Final Flash, but Grimes avoids that one. They start trading shots now, and Riddle gets the upper hand. Riddle connects with kicks, and hits an Exploder for a two count. Riddle continues the offense with more strikes. Grimes tries to mount an offense, and they trade kicks now. Riddle hits the Bro 2 Sleep, but can’t get the three count. Grimes fights back and then climbs to the top rope, but Riddle cuts him off and superplexes him for a two count. Riddle hits the Floating Bro for another two count. After a series of counters and roll-up attempts, Riddle fires up with a flurry of moves on Grimes for the three count.

– After the match, Riddle wants a fist bump, but Grimes declines and Riddle leaves Grimes gets into it with Tyler Bate at ringside now, and Bate drops Grimes with a punch to the face.

– We see a replay of The Forgotten Sons beating Breezango a couple weeks back.

– Dominik Dijakovic is shown backstage warming up for his match tonight. In an interview, he talks about his return from injury and it’s time for him to fulfill his destiny.

– Mauro shows us a video of NXT GM William Regal announcing that Asuka and Kairi Sane will be defending their WWE Tag Titles next week against the winners of tonight’s women’s tag team match.

– Breezango & Isaiah “Swerve” Scott vs. The Forgotten Sons: After a little confusion over who is going to start in this match, Swerve and Ryker start going at it. Fandango tags in next and Ryker overpowers him. Cutler tags in to continue the offense. Fandango fights back and sends both Forgotten Sons outside to regroup. Ryker tags back in and works over Breeze in the corner now. Blake and Ryker trade tags now to double team Breeze. Ryker misses a shot and hits the ring post, then Breeze dumps Cutler out to the floor. Blake runs in and stops Breeze from tagging out. Breeze finally breaks free and Fandango gets the hot tag. Fandango unloads with strikes on Blake now. Cutler tags himself in and starts working over Fandango, until Scott tags in and he hits a big cross body on Cutler. Cutler and Scott brawl in the ring now, but things quickly spill out to ringside and the Forgotten Sons triple-team Scott off the turnbuckle. Back in the ring, Breeze breaks up the pin. Scott starts fighting off all three Forgotten Sons, then he goes up to the top rope, but Ryker cuts him off. Scott knocks Ryker down to the apron and stomps him, then he springboards off Ryker to hit Cutler and Blake on the ringside floor. Back in the ring, Breezango hits double superkicks on Ryker. Fandango and Ryker go at it now, then Scott and Cutler tag in. Breeze runs in to prevent the double team, and the aprons clear as this one starts to fall apart. When the dust settles, it’s down to Scott and Blake, and Scott connects with a big kick to the head for the three count.

– We see The Undisputed Era backstage, and then a pre-taped promo from Roderick Strong. Strong says he knows Regal is trying to screw him over, but he’s at his best when the lights are on, and tonight he will show why he’s Undisputed.

– Cruiserweight Champion Lio Rush comes out, and it looks like he’ll be joining the commentary team.

– We see a pre-taped segment with Killian Dain somewhere standing next to a fire. Dain is wrapping tape around his fingers. He says last week Pete Dunne tried to break his fingers, and now he’s going to break Dunne.

– Angel Garza vs. Jack Gallagher: Gallagher tries to shake Garza’s hand, but Garza isn’t interested. They lock up and trade takedowns and arm holds in the opening moments. Gallagher pulls off Garza’s pants, and he’s still wearing his trunks underneath. Garza fires back with a dropkick, then hits a suplex and a big boot for a two count. Jack starts fighting back and hits a suplex of his own. They trade submission attempts on the mat, until Garza launches Gallagher out to the ringside floor. Back in the ring, Jack fires back with a headbutt. Garza fires back with a slam from the corner, then he hits a springboard moonsault for the three count.

– Garza and Rush have a stare down from the ring to the announce table after the match.

– Tegan Nox and Dakota Kai vs. Marina Shafir and Jessamyn Duke: This one is a #1 contenders match for the WWE Women’s Tag Team Titles. Duke starts off strong with a big kick on Kai for a two count. More strikes in the corner from Duke, then Shafir tags in. Duke and Shafir trade frequent tags now to continue the offense on Kai. Kai finally fights back, dropping Duke on the apron, and then hitting a big boot on Shafir. Nox gets the hot tag and unloads with offense on both opponents. Kai connects with a bicycle kick on Shaif, then Nox hits the Shiniest Wizard on Duke. Nox covers for the three count.

– After the match, WWE Women’s Tag Team Champions Asuk and Kairi Sane appear on the big screen and taunt the new #1 contenders. They laugh and say Nox and Kai don’t have a chance.

– Keith Lee is shown backstage warming up for his match. They show a pre-taped promo of Lee talking about his opportunity tonight, and says he’ll do anything it takes to win.

– After the match, the rest of the Undisputed Era members come out to the ring to celebrate. They start beating down Lee, then Tommaso Ciampa comes out to interrupt, and so does Johnny Gargano. The fans chant “DIY” as Ciampa and Gargano come face to face in the ring. Ciampa and Gargano stand directly across from the Undisputed Era, and then Finn Balor comes out too. Balor steps in the ring, but then Balor nails Gargano with a kick to the head out of nowhere. The Undisputed Era jumps Ciampa and beats him down now. Gargano rolls out to ringside, and Balor follows. Balor dropkicks Gargano into the fan barricade, and the barricade breaks apart and knocks over some planted fans sitting behind it. Balor then brings Gargano over to the ramp, and hits a big DDT on the ramp. The Era stands tall in the ring while Balor stands on the ramp looking down at Gargano, and NXT goes off the air.