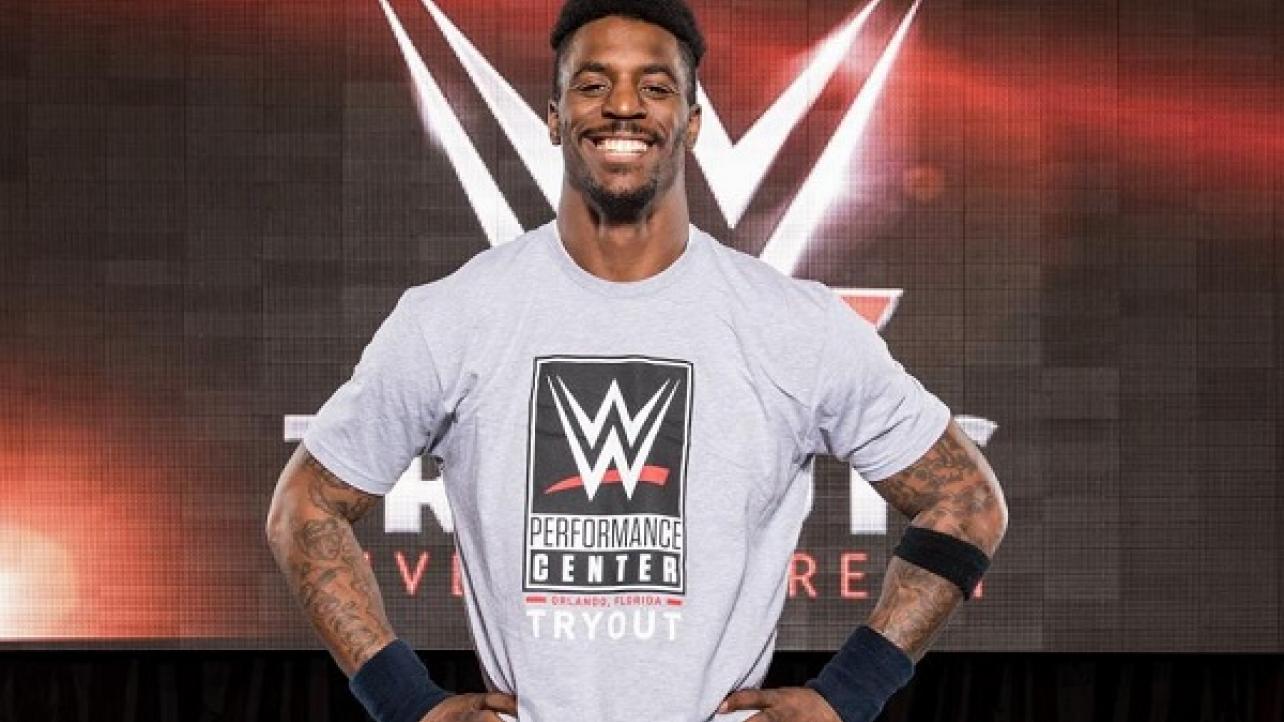 WWE’s second talent tryout of the year, featuring 40 athletes, is underway this week at the WWE Performance Center in Orlando, Fla.

The camp is WWE’s first domestic tryout of 2019. In March, talent scouts and WWEPC coaches ventured to Mumbai, India, to hold the first tryout in the country’s history.

This week’s tryout, overseen by WWEPC Head Coach Matt Bloom, includes athletes from all walks of life, highlighting the diverse backgrounds of prospective Superstars. Included in the mix is a slew of professional football players, a 2016 Olympian, champions from the independent wrestling circuit in North America and beyond, a former WWE Tough Enough participant, a member of the famed Anoa’i wrestling dynasty, martial artists and more.

Former NFL running back James Wilder (pictured above) currently plays in the CFL with the Toronto Argonauts. The 6-foot-3, 225-pounder spent three years in the NFL.

Taiwan Markis Jones, a 25-year-old footballer from Michigan who played linebacker for Michigan State University and the New York Jets. He stands 6-foot-4 and weighs 235 pounds.

Pro football player Chris Martin, age 29. The 6-foot-6, 305-pounder played for the UCF Knights before turning pro in 2014. He’s had stints in the NFL, the Canadian Football League and, most recently, the Alliance of American Football.

Jana Angel, a 6-foot-3 volleyball player. After graduating college, Angel played professionally in France in the middle blocker position. She also received an invitation to try out for the U.S. Olympic team.

Maritza Ayala, a pink-haired 25-year old who wrestles under the alias Danika Della Rouge. Ayala learned the ropes under the late Buddy Wayne, a veteran of the Pacific Northwest wrestling scene, and has also trained in lucha libre.

Former WWE Tough Enough competitor and NXT Superstar Ivelisse Velez. A 15-year ring veteran, Velez was known as Sofia Cortez during her tenure in Florida Championship Wrestling and NXT in 2011-2012. She brings international experience to the camp, having wrestled in China, the U.K., Australia and Ecuador.

Andrea Benoit, aka NOVA on the independent wrestling scene. The Canadian played volleyball in college and has competed in obstacle course races. Trained by WWE Cruiserweight Classic alumnus Tyson Dux, Benoit made her in-ring debut earlier this year.

Former Division I basketball player Jade Cargill of Atlanta. Standing 5-foot-10, Cargill played guard/forward at Jacksonville University. She led the team in rebounds (227) and steals (48) in her final season.

6-foot-7, 265-pound Kristopher Craig. A former college basketball player, the 29-year-old Craig began ring training under WWE Hall of Famer Billy Gunn at the Team 3D Academy in Florida within the past year.

Michael Delbrey, a 26-year-old from Florida who competed in CrossFit and Olympic weightlifting events before making his wrestling debut in 2017.

Donovan and Leandro Dongo, a pair of hulking brothers from Paramaribo, Suriname. The 6-foot-5, 330-pound Donovan is a former super-heavyweight powerlifting champion and national amateur wrestling champion, while Leandro is a 6-foot-6, 250-pound freestyle wrestler who currently works as a firefighter.

Joshua Dudley, aka Edgrin Stone, a three-year wrestling veteran from Louisiana. The 6-foot-3, 240-pound Dudley played tight end at Nicholls State University before training for the ring at Wildkat Sports and Entertainment.

25-year-old Australian high-flyer Joshua “JXT” Fikret. Although he has spent most of his career in Australia, Fikret has also wrestled in the United States. He counts Rip Rogers and Orlando Jordan among his past coaches.

24-year-old Aaron Gillis, a 7-foot, 400-pounder from Ohio. Making his debut a little over a year ago, Gillis wrestles on the U.S. indies as Paxton Calloway. He also played Division II football at Slippery Rock University in Pennsylvania.

Alexandria Gracia, 26, of Texas. Gracia was originally trained at the Texas Wrestling Academy and currently wrestles for Booker T’s Reality of Wrestling. She has competed in women’s wrestling organizations SHIMMER, Shine Wrestling and Rise Wrestling and toured with Stardom, the Japanese promotion where Kairi Sane and Io Shirai came to prominence.

Greco-Roman wrestler Mahmoud Fawzy Sebie, who represented Egypt in the 2016 Rio Olympics. Wrestling since age 7, the 26-year-old has coached U.S. marines in combat training and self-defense and has also studied taekwondo and Jiu-Jitsu.

Independent wrestler Randy Kaufman, aka Randall Floyd. Kaufman has trained under Rip Rogers and Al Snow, and he wrestled in the 197-pound weight class at the University of Indianapolis.

325-pound Makini Manu, a former football and rugby player at the University of Utah and Utah Valley University.

22-year-old wrestler Patrick McAlpine, a trainee of Steve Corino who has made appearances in NXT under the professional alias of Patrick Scott. He stands 6-foot-2 and weighs 195 pounds.

Albanian-born former NFL lineman Kristjan Sokoli. The 6-foot-5, 295-pounder registered a 38-inch vertical leap and a 4.8-second 40-yard dash before the Seattle Seahawks drafted him in 2015.

Cirque du Soleil acrobat Sidney Bateman, 27. Bateman recently took his first steps in the squared circle as part of a joint workshop between the Performance Center and Cirque du Soleil.

28-year-old multisport athlete Jeanette Horning. In high school, Horning was the only girl on her varsity wrestling team, and she played kicker for her school’s football squad.

Indie wrestler Theresa Lee Schuessler. The 5-foot-7 Floridian has wrestled throughout the U.S., including in NXT, under the professional names of Tenilla and Tesha Price.

Orlando-based wrestler Rafik Youakeem, who competes as Alexander Zane. Youakeem has a background in parkour and Brazilian Jiu-Jitsu.

6-foot-4, 250-pound Jonathan Young from Alabama. A former swimmer at the University of Alabama, Young broke the world record last February for the most pullups in a minute with a 100-pound pack on his back. He’s also a protégé of Lex Luger.

For more information on the WWE Performance Center, including how to apply for a tryout, visit WWEPerformanceCenter.com.