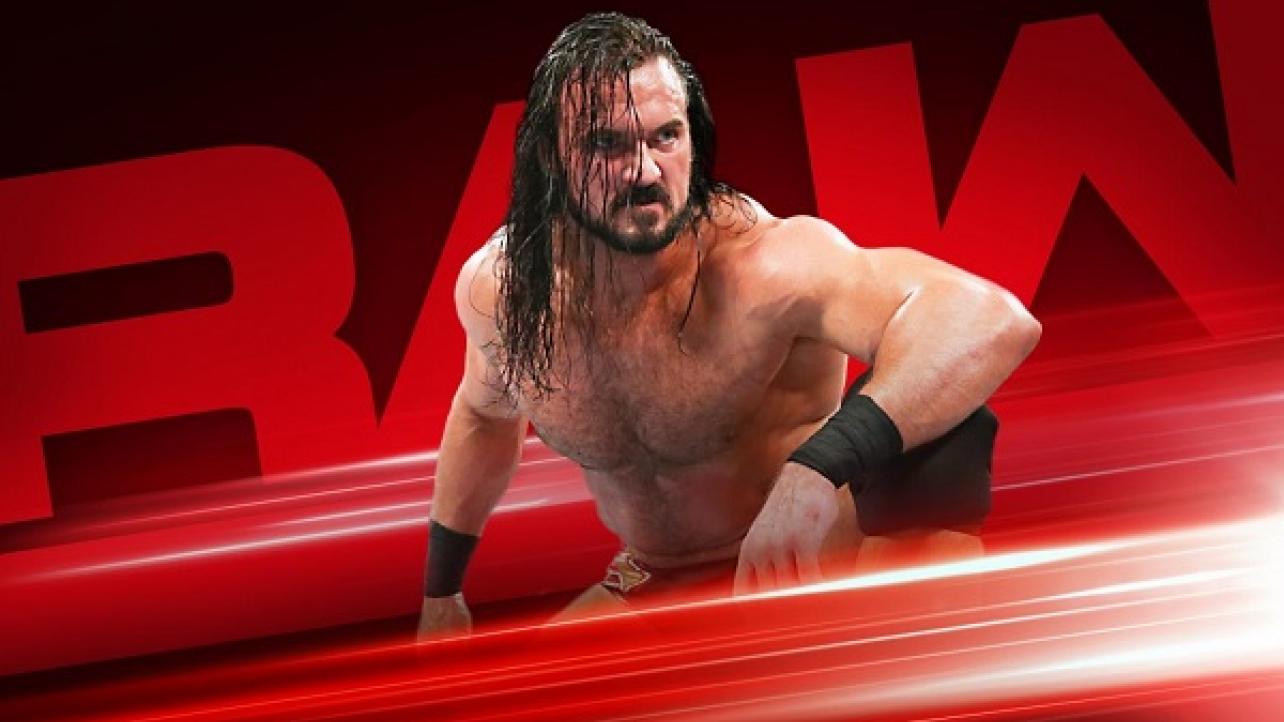 WWE returns to the Dunkin Donuts Center in Providence, Rhode Idsland for the “go-home” episode of RAW leading into Sunday’s WWE Evolution pay-per-view.

WWE.com released the following preview leading into this week’s show from the red brand:

Drew McIntyre dropped Braun Strowman, and Ronda Rousey dissed The Bella Twins in a tense episode of Raw last week. How will the fallout effect Team Red as major title matches at Crown Jewel and WWE Evolution draw near? Find out on Raw, live at Monday at 8/7 C on USA Network.

Braun Strowman laid down the law to Dolph Ziggler & Drew McIntyre before their rubber match with The Shield: You mess up, you pay. Ziggler got pinned, and Braun got angry, but McIntyre had the last word, leveling The Monster Among Men with a Claymore after the titanic Superstar had flattened McIntyre’s fellow Raw Tag Team Champion with a Running Powerslam. The Scottish Psychopath notably didn’t help Ziggler to his feet after the confrontation — he just walked to the top of the ring and stared Strowman down — but it appeared a line in the sand had been drawn for Strowman nonetheless. Braun is known to take his time with his enemies, but with a Universal Title opportunity looming at Crown Jewel, can he afford to fight a war on two fronts?

You know who I am

Elias found himself clowned by a very unexpected individual this week, and we don’t mean Gritty. Apollo Crews decided to make a locker room power play at the expense of one of WWE’s fastest-rising — if divisive — Superstars, and he delivered in the moment, leaving Elias scrambling after cutting off his concert and dropping him with a spectacular press slam. Crews certainly made a statement, but Elias has a long track record of overreacting when his spotlight is stolen. It’s on now.

… So goes The Shield? Dean Ambrose’s commitment to his brothers was under a microscope yet again on last week’s Raw, and The Lunatic Fringe sent the most overt signals yet that he was unhappy with his perceived role in the trio (he thinks he’s only there to be the wild card). Ambrose came close to laying out Intercontinental Champion Seth Rollins with Dirty Deeds after a couple of inadvertent collisions, but Universal Champion Roman Reigns managed to right the ship and steer The Shield to a main-event victory that seemingly cooled things off. As we’ve come to learn, however, it’s best to take things week-to-week with Dean Ambrose, and it’s anyone’s guess what this week will bring.

When he’s not sending Kevin Owens to the shelf or full nelson-ing Tyler Breeze into unconsciousness, Bobby Lashley has showcased his new ‘tude with increasingly blatant disrespect of Finn Bálor. The first-ever Universal Champion has thus far taken the high road, but Lashley can only do the most muscular pose in Bálor’s face while Lio Rush cackles for so long. In fact, Bálor added an ominous caption to a social media photo of their last face-off: “Bigger they are …” Maybe this is the week he decides to see how hard Lashley falls.

Ronda Rousey and The Bella Twins held nothing back in their first confrontation after Nikki & Brie betrayed The Baddest Woman on the Planet to set up a Raw Women’s Title Match between Rousey and Nikki at WWE Evolution. But Nikki & Brie wisely kept from throwing hands with Rousey before they had to, instead sending a crew of hapless security goons to their demise while making themselves scarce. If their strategy is to rile up the champion to such a degree that they can catch her unaware, then, well … that’s not a bad strategy. They had just better hope they keep her off their tails for one more week; find out if they can when Raw airs Monday, live at 9/8 C on USA Network.

Join us here on Monday evening for live play-by-play results coverage of the WWE Evolution “go-home” episode of WWE RAW!