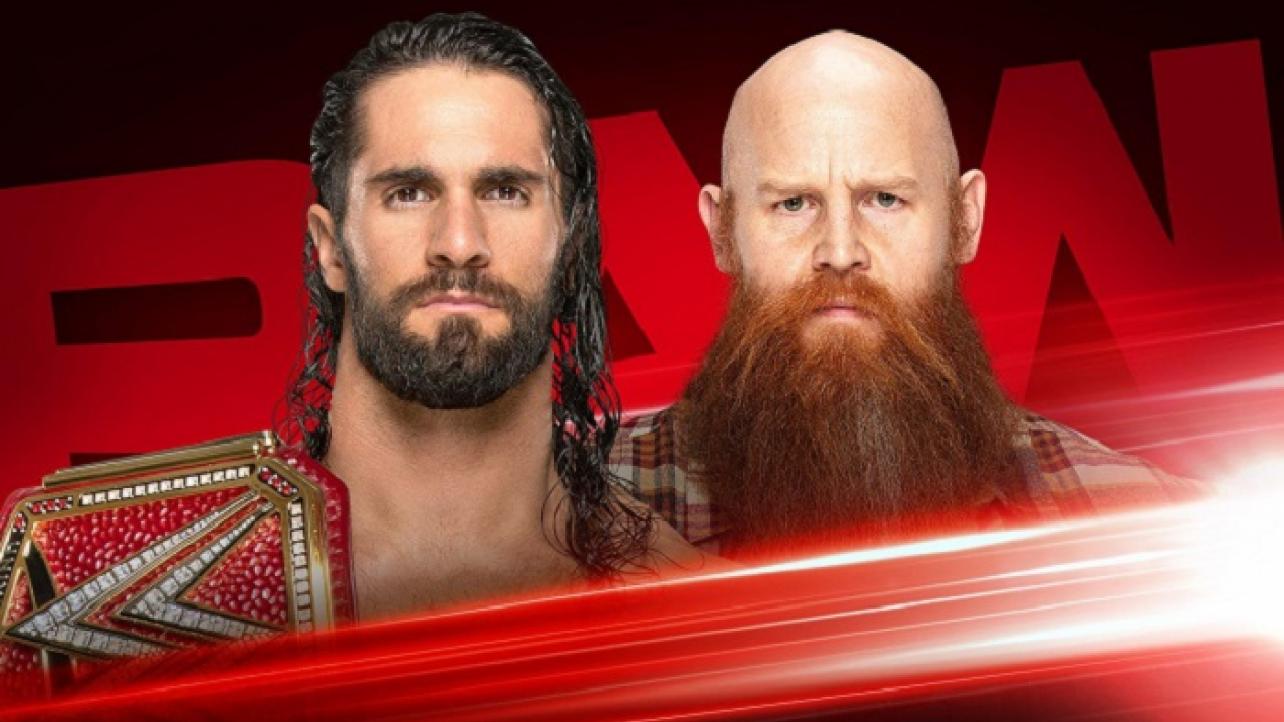 WWE returns to the Enterprise Center in St. Louis, Missouri this evening for this week’s episode of WWE RAW on the USA Network.

With a Universal Championship Falls Count Anywhere Match against “The Fiend” Bray Wyatt at WWE Crown Jewel looming in the distance, Seth Rollins will get to try his hand at the ruthless stipulation opposite one of Raw’s newest monsters.

As revealed on FS1’s WWE Backstage show, the Universal Champion will go one-on-one with Raw draftee Erick Rowan in a Falls Count Anywhere Match this Monday, potentially giving The Beastslayer a chance to work out the kinks as he barrels toward his horrifying foe at WWE Crown Jewel.

The match also carries a certain kind of poetic significance. In what feels like another lifetime, Rowan was a disciple of Wyatt’s. And although the former SmackDown Tag Team Champion has since broken away from any and all subjugation to become his own kind of nightmare, Rollins might gain the mental edge that he sorely needs if he can defeat Rowan prior to squaring off against the Superstar who has pushed him to the brink of his sanity. Tune in to Raw this Monday, live at 8/7 C on USA Network, to see who prevails.

If tensions weren’t already at a boiling point between Hulk Hogan, Ric Flair and their respective teams heading into their massive 5-on-5 Tag Team showdown at WWE Crown Jewel, they certainly are now.

With only three days before the score is settled at Crown Jewel, what’s in store when both The Hulkster and The Nature Boy are on hand for Raw on USA Network at 8/7 C?

Will The Man continue her dominance over the Raw Women’s division, or will Sane step up under the bright lights? Find out on USA Network at 8/7 C.

After serving as the catalyst for fireworks last week in WWE’s most scandalous love triangle, what will we see this week on “The King’s Court”?

Lana and Bobby Lashley’s restaurant date interrupted Rusev’s conversation with Jerry “The King” Lawler, later leading to The Bulgarian Brute’s attack on Lashley in the very same restaurant. Rusev was ultimately taken into custody by the Cleveland Police Department.

After being released when Lana and Lashley didn’t press charges, Rusev is set to appear again on “The King’s Court” — and he’ll be joined by his estranged wife herself, Lana.

What will the two former lovers have to say before Rusev and Lashley represent Team Hogan and Team Flair at Thursday’s WWE Crown Jewel?

Drew McIntyre made good on his promise to make things “uncomfortable” last week, defeating Ricochet after Ric Flair unveiled McIntyre as the final member of his team for WWE Crown Jewel.

Team Hogan answered with a volley of its own when captain Roman Reigns and teammates Ali & Shorty G got the better of Cesaro and Team Flair representatives King Corbin and Intercontinental Champion Shinsuke Nakamura in Six-Man Tag Team action on SmackDown.

Now, Ricochet gets a chance to avenge last week’s loss, while McIntyre once again looks to enforce his will on WWE’s resident superhero. Find out who will seize the advantage for their team just three days before WWE Crown Jewel, live at 8/7 C on USA Network!

Make sure to join us here at Rajah.com TONIGHT for LIVE WWE RAW Results coverage from St. Louis!