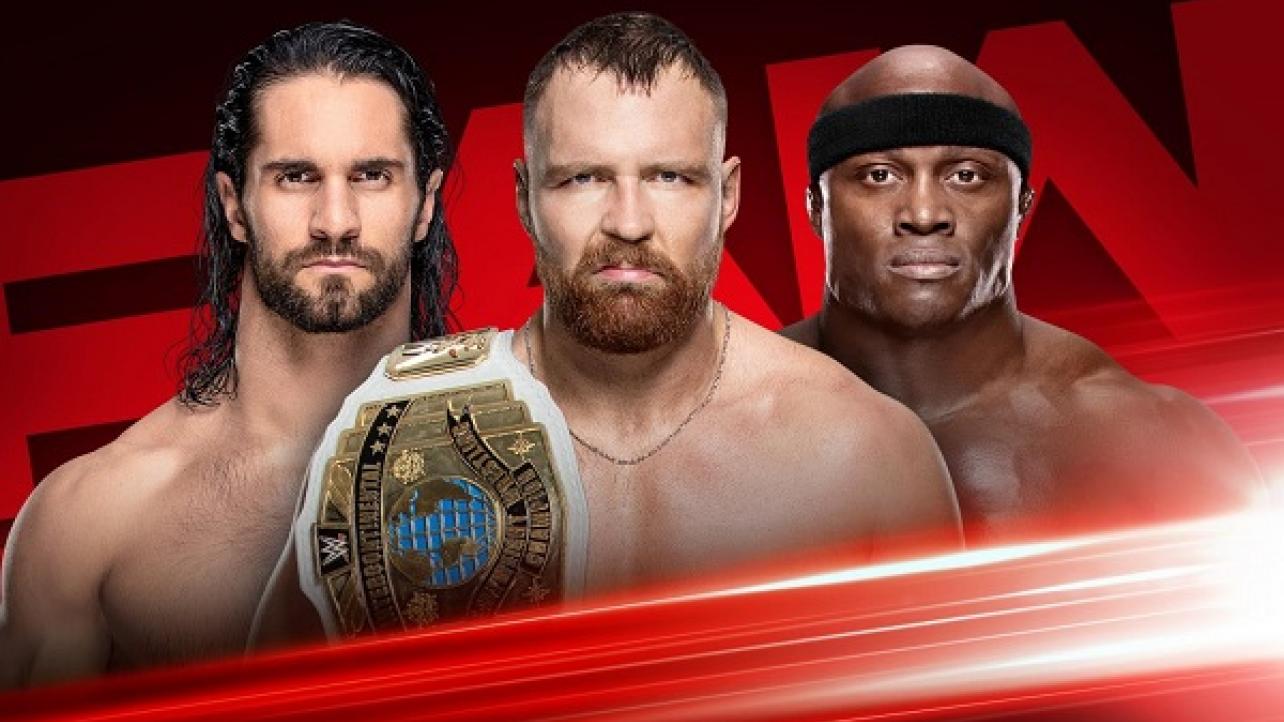 WWE returns to the FedEx Forum in Memphis, Tennessee this evening for this week’s episode of WWE RAW on the USA Network.

As Seth Rollins was moments away from reclaiming the Intercontinental Championship from Dean Ambrose in a Falls Count Anywhere main event, “The All Mighty” Bobby Lashley attacked The Kingslayer and drove him through a table. Following that bout’s controversial conclusion, the McMahon family has scheduled an Intercontinental Championship Triple Threat Match for Raw, pitting WWE’s self-proclaimed “Moral Compass” against The Architect and “The All Mighty One.”

After pinning Dean Ambrose in this past Monday night’s Six-Man Tag Team Match, an increasingly aggressive Seth Rollins earned an Intercontinental Championship that, per Triple H, would be a Falls Count Anywhere Match.

Taking full advantage of the lenient stipulation, The Architect battered the self-proclaimed “Moral Compass of WWE” all over the arena, even ambushing his foe before the match. After hitting Ambrose with a Stomp that would have won the bout, however, Bobby Lashley — who had brawled with The Kingslayer as Raw went on the air — hit the ring and mercilessly pummeled the would-be Intercontinental Champion. After Ambrose scored the pinfall, “The All Mighty One” continued the brutality by driving Rollins through a table.

This coming Monday on Raw, Rollins will once again have a chance to reclaim Team Red’s workhorse title, but he’ll need to battle both Ambrose and Lashley in a Triple Threat Match. Who will walk into the WWE Royal Rumble event as Intercontinental Champion?

The Boss and The Rowdy One face common enemies

Embodying everything WWE’s fresh start under the McMahon family stands for, Sasha Banks seized opportunity this past Monday night, challenging Nia Jax for the right to challenge Ronda Rousey for the Raw Women’s Championship at the WWE Royal Rumble event. With best friend Bayley neutralizing the threat of Tamina at ringside, The Boss handled her business with The Irresistible Force, making her foe tap out to the Bank Statement.

As their title bout looms, Banks and Rousey must join forces to face Jax and Tamina in tag team action on Raw. Can they coexist given what awaits on Jan. 27 in Phoenix?

After suffering a shattered right elbow back in November and undergoing surgery, Braun Strowman officially competes for the first time since his injury at the WWE Royal Rumble event, challenging Brock Lesnar for the Universal Championship.

The Monster Among Men came to Raw this past Monday night to throw down with The Beast Incarnate, but Lesnar refused to give Strowman or the WWE Universe the fight they wanted. Despite what he says, is the recovering Monster truly ready for a trip to Suplex City? Strowman has suffered defeat to Lesnar before, and given his condition, the behemoth seems to be at a rarely seen disadvantage. How is he preparing for the challenge that lies ahead?

2018 wasn’t kind to The Revival, and 2019 isn’t going any differently for Scott Dawson & Dash Wilder. One week after Raw Tag Team Champions Bobby Roode & Chad Gable held on to their titles after the wrong member of The Revival was pinned, a rematch ended in controversy when Gable scored the 1-2-3 on Dawson, even though the “Top Guy’s” foot was on the rope — a tactic that should have broken up the pin.

Following two controversial defeats in so many weeks, The Revival claim there’s a conspiracy against them and, really, can you blame them?

The fields for both the Men’s and Women’s Royal Rumble Matches are already getting crowded, with Raw Superstars like John Cena, Seth Rollins, Elias, Bayley and The Riott Squad revealing they will compete in their respective over-the-top-rope contests.

Who else will declare for a Royal Rumble Match, where a title opportunity at WrestleMania will be earned through grit, determination and no small amount of stamina?