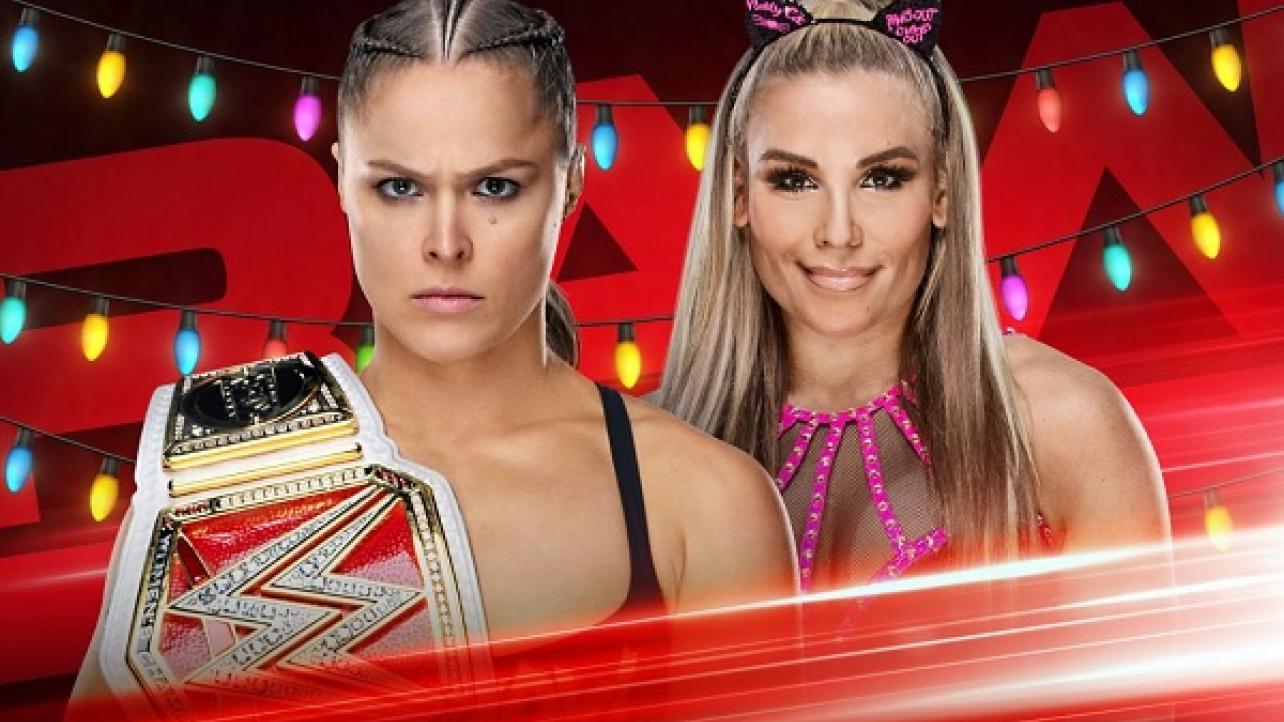 WWE returns to the USA Network this evening with their taped Christmas Eve episode of RAW.

You’re a mean one, Mr. Corbin, but Seth Rollins knows how to deal with Grinches. After The Kingslayer placed the blame for Raw’s decline on The Lone Wolf’s shoulders, Corbin was convinced that Rollins poisoned the roster against him and prompted the McMahon family to assume stewardship of both the red brand and SmackDown LIVE. When the would-be Raw General Manager confronted Rollins with these assertions, The Architect socked Corbin in the jaw, which grew three sizes that day (although it might have been just the swelling).

Dr. Seuss references aside, the battle between Rollins and Ambrose on Christmas night will be must-see. Get that Yule Log ready, WWE Universe. Monday Night Rollins is about to “Burn it Down.”

Friendship will be put to the test when Natalya takes on longtime training partner Ronda Rousey for the Raw Women’s Championship on a special Christmas Eve edition of Monday Night Raw.

Both Superstars have shown recently how ruthless they can be. Natalya held nothing back in her Tables Match against Ruby Riott at WWE TLC, then went on to defeat three Superstars in a row during last Monday’s Gauntlet Match. The Rowdy One, meanwhile, made Nia Jax submit to the Armbar at the pay-per-view event, then went on to topple a ladder and send SmackDown Women’s Champion Becky Lynch and Charlotte Flair crashing to the floor at the end of the night.

The stakes are high for these indomitable women, and regardless of the outcome, their friendship could very well change forever.

The WWE Universe can expect a true “Nightmare Before Christmas” with this bout. One week after Drew McIntyre interfered in Finn Bálor and Dolph Ziggler’s match by pummeling both Superstars, all three rivals will settle their differences in a Triple Threat Match, live on Raw.

The Scottish Psychopath seems unstoppable as of late, and views Bálor and Ziggler as obstacles in his path to root out complacency in the locker room. Meanwhile, there’s no love between the first Universal Champion and The Showoff, whose own rivalry incited a brutal backstage altercation at WWE TLC.

Who will emerge victorious in what is sure to be an intense grudge match?

Elias might have earned himself a spot on Santa Claus’ “Nice” list over the past few weeks, but Bobby Lashley and Lio Rush have cemented their place in the “Naughty” column, and they’re seemingly proud of that fact.

In what has become a WWE holiday tradition, these warring Superstars will meet in a Miracle on 34th Street Fight, where there will be no count-outs, no disqualifications and no telling what kind of merry mayhem will ensue.

Benefiting from the McMahon family’s elimination of championship rematch clauses — meaning a defeated titleholder does not have a guaranteed chance to reclaim their title — The Revival scored a Raw Tag Team Championship opportunity against new champions Bobby Roode & Chad Gable, and that match will take place on Christmas Eve.

Scott Dawson & Dash Wilder earned that title bout by defeating AOP (who had just lost their titles to Roode & Gable and did not get a rematch), The B-Team and Lucha House Party in a Fatal 4-Way Match. Can these “Top Guys” keep that momentum going and become Raw Tag Team Champions on Christmas Eve? They ho-ho-hope so.

A roaring fire, lights twinkling and dreams of Brock Lesnar German suplexing his opponents into submission. Such is the the holiday season for Paul Heyman, who is awaiting The Beast Incarnate’s next Universal Championship defense against Braun Strowman at the WWE Royal Rumble event.

The advocate for The Conqueror will be at Raw for a special holiday celebration. So you’d better watch out, and you’d better not cry.