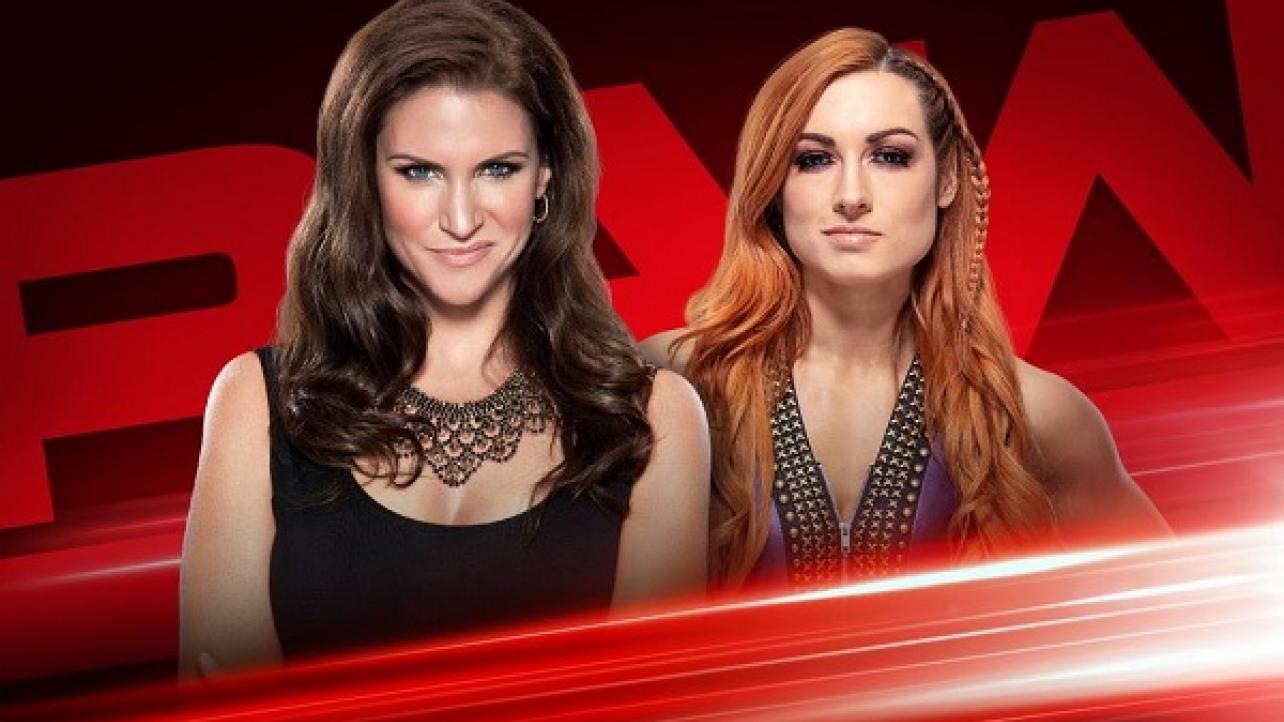 WWE returns to the Moda Center in Portland, Oregon this evening for this week’s episode of WWE RAW, live on the USA Network.

2019 Women’s Royal Rumble Winner and SmackDown LIVE Superstar Becky Lynch, who will challenge Ronda Rousey for the Raw Women’s Championship at WrestleMania, has been invited to Raw by Stephanie McMahon.

This past Monday night, The Man made her decision to challenge The Baddest Woman on the Planet, sparking a heated exchange with The Rowdy One. Despite suffering an apparent knee injury from Charlotte Flair the following night on the blue brand, Lynch remains confident in her ability to unseat Rousey on The Grandest Stage of Them All.

What might Stephanie have in store for The Irish Lass Kicker?

Kurt Angle will address his future with WWE

Following Kurt Angle’s crushing loss last week to Baron Corbin — the very man who cost The Olympic Hero his Raw General Manager role — the WWE Hall of Famer will address his future in WWE on Raw.

It is unclear at this time just what Angle will be announcing, but you won’t want to miss whatever the four-time WWE Champion has to say.

The Boss ‘N’ Hug Connection have long dreamed of becoming tandem champions in WWE, and their journey toward that goal officially begins on Raw when they face the unpredictable alliance of Alicia Fox & Nikki Cross in a WWE Women’s Tag Team Championship Elimination Chamber Qualifying Match.

The winning duo of this match will join Raw’s teams of Nia Jax & Tamina and Liv Morgan & Sarah Logan and SmackDown LIVE’s IIconics — along with two other blue brand teams yet to be determined — inside the formidable Elimination Chamber structure in a clash to determine the first-ever WWE Women’s Tag Team Champions.

Does Seth Rollins regret his decision to choose Universal Champion Brock Lesnar as his WrestleMania opponent?

By inciting a brawl with Universal Champion Brock Lesnar at the end of this past Monday night’s Raw, Men’s Royal Rumble Match winner Seth Rollins made it clear who he will be challenging at WrestleMania. However, that gutsy move earned The Architect six F-5s — a savage preview of what now awaits The Kingslayer at The Show of Shows.

Rollins is as resilient as they come — he even continued to goad The Beast during the F-5 onslaught — but has The Architect chosen the path of most resistance on The Road to WrestleMania?

Will Braun Strowman get payback against Drew McIntyre and Baron Corbin?

Two of the men responsible for putting Braun Strowman on the shelf overpowered The Monster Among Men once again this past Monday night. As Strowman battled Drew McIntyre, Baron Corbin ambushed the behemoth, joining The Scottish Psychopath in a vicious assault that culminated in a double chokeslam onto the steel steps.

It’s now a matter of when — not if — both of these nefarious Superstars “Get These Hands.”

One week after an already injured Finn Bálor suffered a beatdown at the hands of Intercontinental Champion Bobby Lashley, The Extraordinary Man will get his chance for redemption when he battles “The All Mighty” one-on-on on Raw.

Bálor is as gutsy as they come, and despite absorbing the crushing offense of Universal Champion Brock Lesnar and the unstoppable Lashley in back-to-back nights, the Irishman refuses to back down. Will the battered Bálor be up to the task of bruising Lashley’s ego?

Elias might have gotten the better of WWE Hall of Famer Jeff Jarrett and Road Dogg this past Monday on Raw, taking down the two legends with guitar-smashing malice, but The Living Truth could be singing a different tune when he battles Double J one-on-one.

With Road Dogg in his corner, can Jarrett defeat the treacherous troubadour?

Make sure to visit us here at eWrestling.com this evening for live play-by-play results coverage of WWE RAW!