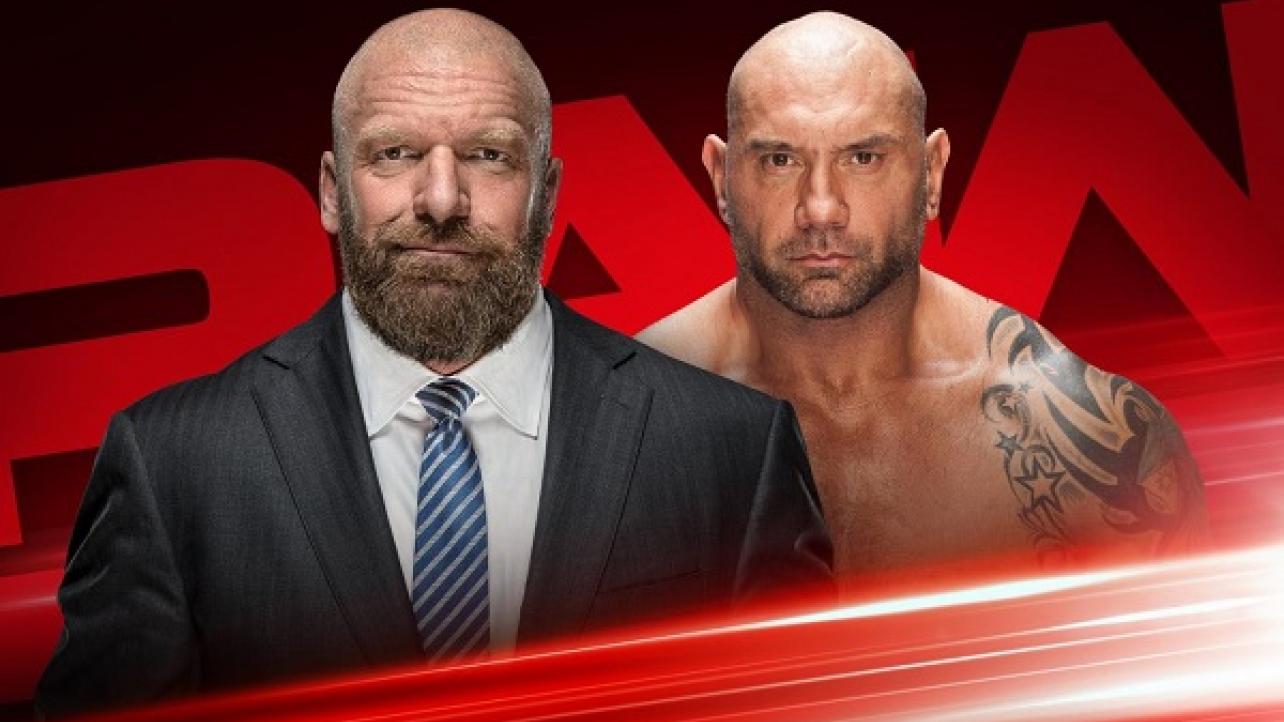 WWE returns to the PPG Paints Arena in Pittsburgh, Pennsylvania this evening for the post-Fastlane edition of RAW.

Tonight on Monday Night Raw, WWE COO Triple H will come face-to-face with Batista, two weeks after The Animal made a shocking return to attack WWE Hall of Famer Ric Flair to get The Game’s attention.

What will happen when Triple H comes face-to-face with Batista?

Tonight on Raw, Triple H will stand face-to-face with Batista, two weeks after The Animal made a shocking return to attack WWE Hall of Famer Ric Flair to get The Game’s attention.

Can the squared circle possibly contain the former Evolution cohorts amidst such volatile circumstances? Will Batista continue to play mind games with The Cerebral Assassin?

Will chaos reign now that Becky has been added to Raw Women’s Title Match at WrestleMania?

For months, the intensity surrounding the Raw Women’s Championship has been bringing non-stop chaos to Raw. Last night at WWE Fastlane, interference from Ronda Rousey gave Becky Lynch a victory by disqualification over Charlotte Flair, which allowed The Man to join the Raw Women’s Title Match at WrestleMania against The Baddest Women on the Planet and The Queen. Will this result in more bedlam between the three Superstars en route to The Showcase of The Immortals?

Who will stop Nia Jax & Tamina on The Road to WrestleMania?

To make matters worse, the destructive pair also took out WWE Hall of Famer Beth Phoenix before also laying out Natalya when The Queen of Harts came to the aid of her former partner.

Will the titleholders be out for retribution or move on to their next big challenge? Will Phoenix and Natayla be back for more? Can anyone stop the scourge of Nia & Tamina on The Road to WrestleMania?

Where will Reigns, Rollins and Ambrose go after The Shield’s last ride?

Roman Reigns, Seth Rollins and Dean Ambrose triumphed over Baron Corbin, Drew McIntyre and Bobby Lashley in The Shield’s last ride at WWE Fastlane. It’s been said that when a door closes, another opens. What will that look like?

How will Rollins gear up for his titanic WrestleMania clash against Universal Champion Brock Lesnar? After Reigns made his triumphant return from his battle with leukemia, who is The Big Dog hoping to face on The Grandest Stage of Them All? What’s next for Ambrose after the historic win by The Hounds of Justice?

Who will emerge victorious in Intercontinental Title showdown?

Now, 24 hours after he and his cohorts battled The Shield, Bobby Lashley has an Intercontinental Championship Match against Finn Bálor. Who will walk out of Raw with the workhorse title on the turbulent Road to WrestleMania?