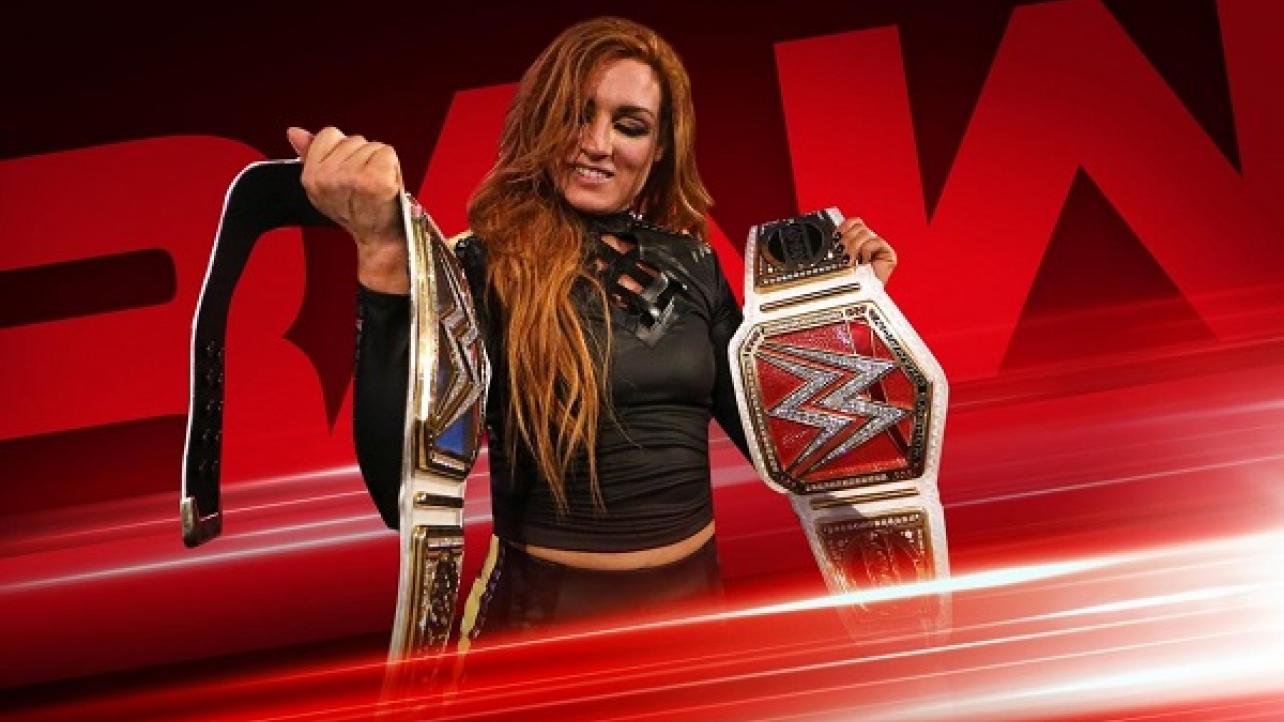 WWE returns to the USA Network this evening from Barclays Center in Brooklyn, New York for the post-WrestleMania 35 episode of WWE RAW.

WrestleMania 35 was indeed WrestleMANia as Becky Lynch defeated Ronda Rousey and Charlotte Flair to capture the Raw and SmackDown Women’s Titles in the first-ever women’s main event on The Grandest Stage Of Them All. Tonight, The Man brings her titles and addresses the WWE Universe on the first Raw after WrestleMania – an evening that is guaranteed to offer its share of shocking developments.

WrestleMania’s historic, first-ever women’s main event lived up to every bit of the hype, and then some. In a Winner Take All classic that may best be described as “indescribable,” it was Becky Lynch who emerged victorious over Ronda Rousey and Charlotte Flair, and in the process became WWE’s inaugural Raw and SmackDown Women’s Champion.

And now The Man, accompanied by her newly won championship gold, comes around to Raw tonight. If history has taught us anything, it’s that anything can – and will – happen on the Raw after WrestleMania. What does Lynch have to say to the WWE Universe? Find out tonight on USA Network at 8/7 CT.

Seth Rollins told Brock Lesnar and the WWE Universe that at WrestleMania, he would march into Suplex City and burn it down. Well, the smoke has cleared, The Beast has been slain, and The Beastslayer is the new Universal Champion.

It nearly didn’t happen. Before the match had officially begun, Lesnar savagely assaulted Rollins to the point where The Architect could barely stand. Yet stand he did, and he made the most of his opportunity to take Lesnar down and keep him down for the three-count.

In a WWE.com exclusive shortly after the bout, the new Universal Champion promised to be a fighting champion. Will tonight in Brooklyn provide Rollins his first opportunity to prove it?

The Big Dog reclaims his yard

Yes, Roman Reigns bested Drew McIntyre in a brutal, highly personal confrontation at WrestleMania 35. More important, he silenced even the most vocal of doubters who wondered if he could return to WWE at 100 percent following his battle with leukemia, or that he could once again make Raw the yard of The Big Dog.

Don’t expect The Scottish Psychopath to go away quietly, however. Despite falling short, McIntyre relentlessly pummeled Reigns for much of the contest. And let’s not forget how he spent the past several months dominating the Raw roster, including his victories over Reigns’ Shield brothers, Seth Rollins and Dean Ambrose. How will McIntyre respond to his loss at WrestleMania, and will Roman Reigns see it coming when he does?

Second Intercontinental Title is “too sweet” for Bálor

Finn Bálor unleashed The Demon at WrestleMania 35, defeating Bobby Lashley and leaving MetLife Stadium with his second Intercontinental Title. Now that he has vanquished “The All Mighty,” what new challenges await The Extraordinary Man? And will the first of those challenges rise against Bálor tonight on Raw?

Curt Hawkins’ first win in 270 matches couldn’t have come at a better time, or on a grander stage. Hawkins joined The Undertaker and Asuka in the WrestleMania history books by snapping another iconic – albeit not so favorable – streak, as he and Zack Ryder defeated The Revival’s Dash Wilder & Scott Dawson during the WrestleMania Kickoff, then celebrated in front of a hometown crowd as the new Raw Tag Team Champions.

Now that he has won his first match since November 2016, the question for Hawkins – and for Ryder – is whether they can begin a new streak to keep hold of the red brand’s illustrious tandem titles. Perhaps that question may be answered as early as tonight in Brooklyn.

Expect plenty of surprises to unfold on the Raw after WrestleMania, live at 8/7 C on USA Network!