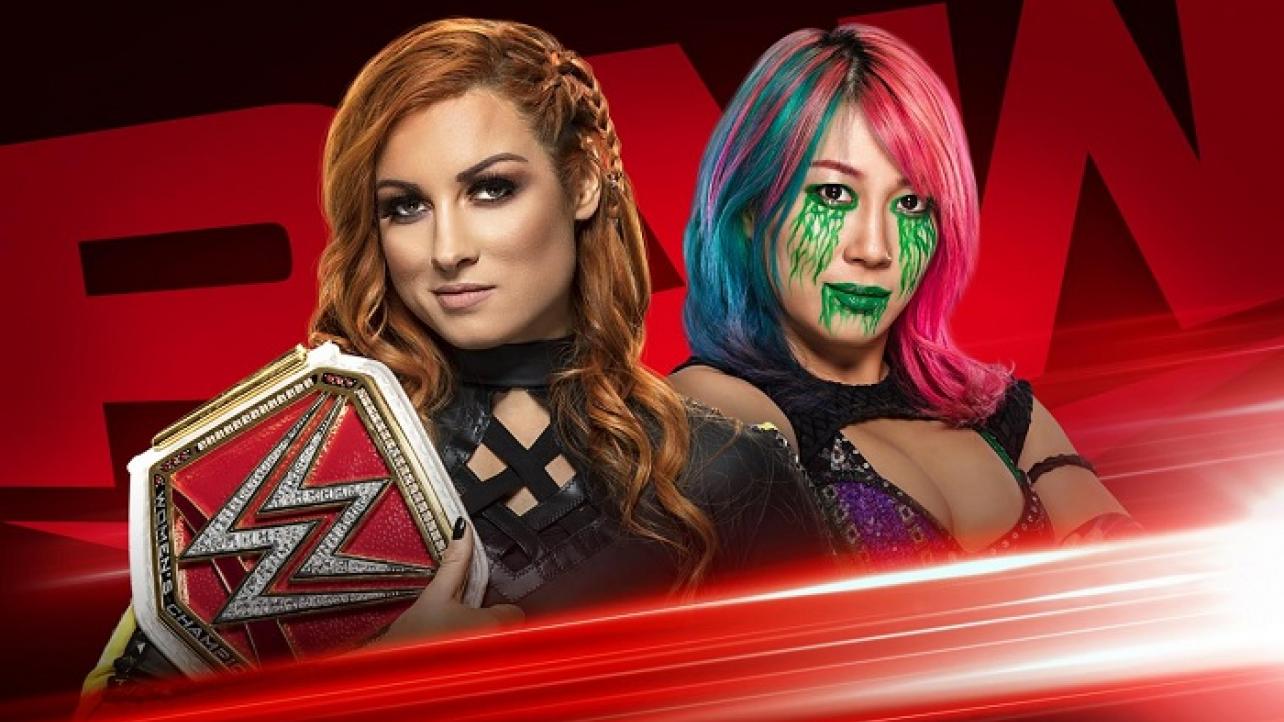 WWE returns to the Performance Center in Orlando, Florida this evening for this week’s post-Money In The Bank edition of Monday Night RAW.

Asuka reached the top of WWE Global Headquarters and claimed the Women’s Money in the Bank contract for herself. Tonight on Raw, she may have a chance to show that the risk is worth the reward, because The Man has her sights set on The Empress of Tomorrow. What will happen when Raw Women’s Champion Becky Lynch confronts Ms. Money in the Bank? Find out on Raw, tonight at 8/7 C on USA!

Just one night after risking it all, Women’s Money in the Bank contract holder Asuka will find out if the reward was worth it, as they will come face to face with Raw Women’s Champion Becky Lynch.

The Man, as confident as ever coming out of her victory over Shayna Baszler at WrestleMania, will certainly be looking to send a message to Asuka, who left WWE Global Headquarters with the contract, and let herknow what they’re up against if she’s considering cashing in on her. However, Lynch will undoubtedly have to keep her head on a swivel in the aftermath of WWE Money in the Bank.

What will happen when The Man comes around?

Edge is on the hunt for Randy Orton

The heated rivalry between Edge and Randy Orton is apparently far from over.

Both Superstars will be at Raw tonight, and The Rated-R Superstar will reportedly be on the hunt for The Viper. Orton, though, is one of WWE’s most cunning competitors. Will he turn the tables on his former friend before Edge finds him?

How will the Street Profits-Viking Raiders rivalry evolve?

The rivalry between Raw Tag Team Champions The Street Profits and The Viking Raiders has been heating up, especially in the wake of Erik & Ivar’s non-title victory over Angelo Dawkins & Montez Ford last Monday.

The two teams took to social media, with The Viking Raiders listing a number of things that they think they can do better than the champions, while The Street Profits twisted the knife, mentioning Erik & Ivar losing the Raw Tag Team Titles.

Well, we have won more titles than you two, all around the world… we can beat you guys at anything. Ax tossing, Feast Eating, Boat Rowing, Combat, Cartwheels, and People Tossing@MontezFordWWE @Erik_WWE @AngeloDawkins #WeWantTheSmoke#JoinTheRaid https://t.co/CNNhk8UXPX pic.twitter.com/MEYcH8w0Is

You guys are waaay more BETTER at losing the RAW TAG TITLES than us… https://t.co/QlvmtZxd6L pic.twitter.com/NUoCFOlpdO

What will happen in the next chapter in this budding rivalry? Find out tonight on Raw at 8/7 C on USA!

The fallout from #MoneyInTheBank2020 goes down TONIGHT, as #RAW returns with Becky Lynch returning to confront Ms. Money In The Bank #Asuka, Edge on the hunt for Randy Orton and MORE! Detailed breakdown for tonight’s post-#MITB show at link below!