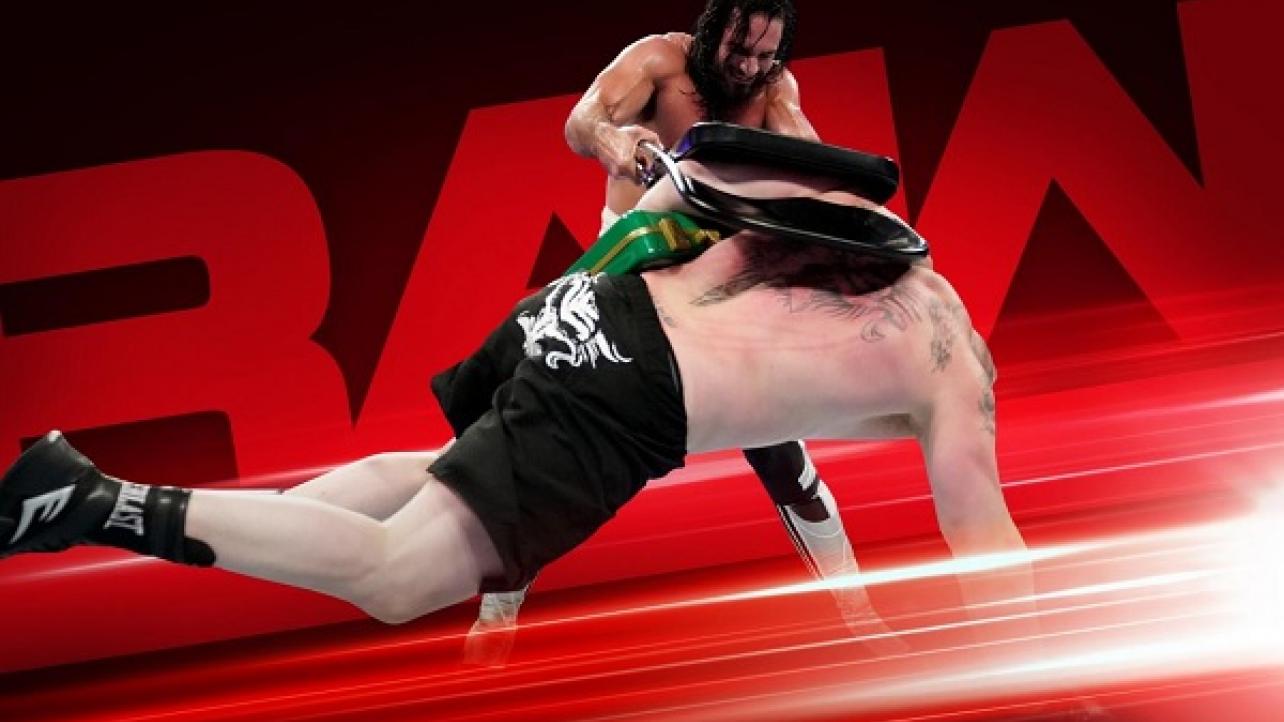 WWE returns to the SAP Center in San Jose, California on Monday evening for this week’s edition of WWE RAW.

Brock Lesnar’s Money in the Bank cash-in attempt at WWE Super ShowDown was repelled by Universal Champion Seth Rollins, who laid into The Beast with a steel chair barrage. Now that he’s fought off The Beast Incarnate (for now), how is the battle-weary Rollins preparing for his Universal Championship rematch against Baron Corbin at WWE Stomping Grounds?

Seth Rollins retained his Universal Championship against Baron Corbin at WWE Super ShowDown, but a post-match End of Days from The Lone Wolf left The Beastslayer vulnerable to Brock Lesnar’s promised Money in the Bank cash-in … or so the WWE Universe thought. When Lesnar’s advocate Paul Heyman tripped on the way into the ring, The Beast was momentarily distracted, giving Rollins the opening he needed to stagger The Conqueror with an uppercut below the belt. Rollins then unleashed on Lesnar with steel chair strikes, punctuating the punishment with a Stomp to The Beast onto the Money in the Bank briefcase.

Lesnar is deterred, at least momentarily, but he never officially cashed in his Money in the Bank contract, meaning that he still has nearly a year to cash in for a World Championship opportunity at the time and place of his choosing. As The Beast licks his wounds and bides his time, Rollins looks ahead to a Universal Championship rematch against Corbin at WWE Stomping Grounds.

This past Monday night, Raw Women’s Champion Becky Lynch wasn’t about to let two of her most despised rivals go one-on-one without getting into the mix. After striking Charlotte Flair at ringside, The Man stormed the ring and nailed Lacey Evans with the Man-handle Slam before standing over The Sassy Southern Belle with her title held high.

On Sunday, June 23, Lynch and Evans will collide for the Raw Women’s Championship at WWE Stomping Grounds. Will The Man and The Lady of WWE collide again on Raw, two weeks before their title collision?

Who will step to Samoa Joe?

Forced to relinquish the United States Championship last Monday night due to injury, Rey Mysterio handed over the star-spangled title to its prior bearer, Samoa Joe. Less than gracious in receiving the title he claims he never truly lost at WWE Money in the Bank (his shoulder was off the mat when the official counted three), The Samoan Submission Machine lashed out, attacking Mysterio and locking The Master of the 619 in the dreaded Coquina Clutch.

Clearly, Joe is one of the most dangerous Superstars on the Raw roster, meaning that anyone eyeing his new prize has a mountainous obstacle ahead of them. Will a challenger emerge on Raw?

With no less than three Powerslams Friday at WWE Super ShowDown, Braun Strowman defeated Bobby Lashley and proved he’s the most dominant behemoth on Monday Night Raw. Now that he’s cut The All Mighty down to size, how will The Monster Among Men keep his mammoth momentum going?

Truth on the run

Whether on the golf course, under the ring, on a tarmac or even 39,000 feet in the air, R-Truth has a target on his back as long as he continues to hold, defend and reclaim the 24/7 Championship. As Drake Maverick, Jinder Mahal and a horde of ravenous Superstars remain hot on his heels, can Truth keep his wits about him?

Don’t miss any of the action this Monday night on Raw, live at 8/7 C on USA Network!