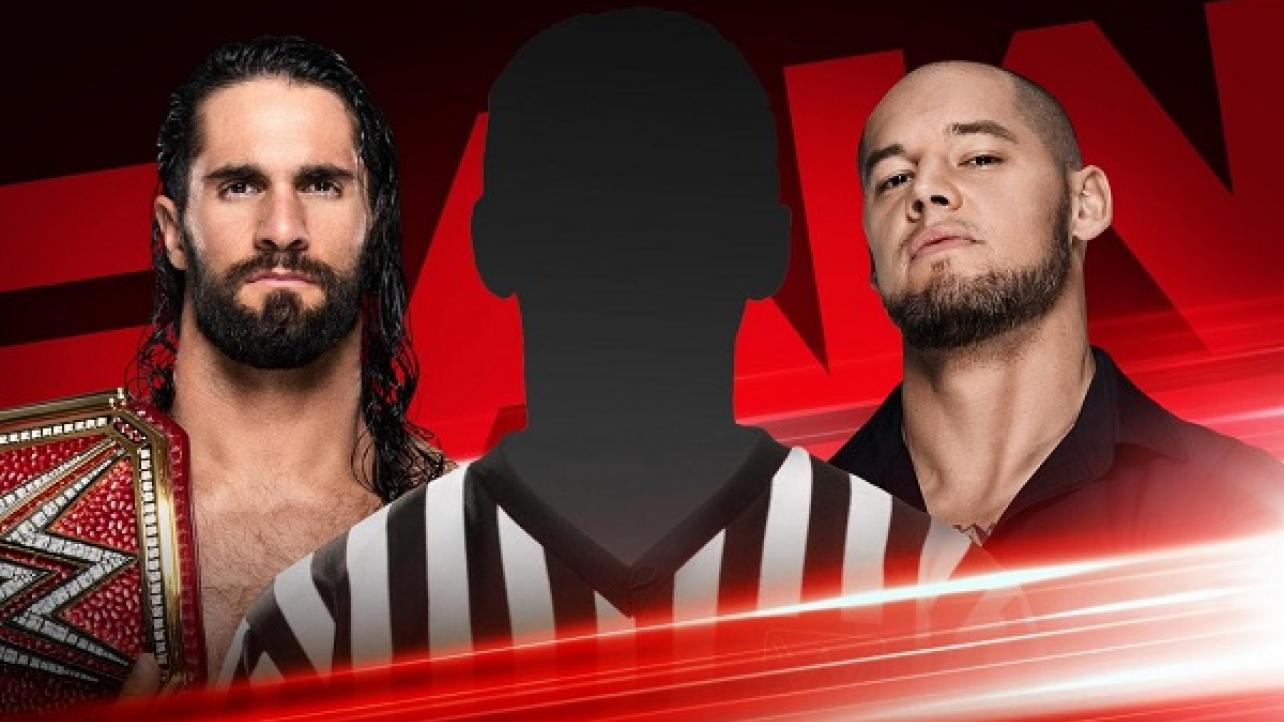 As noted, WWE returns to the STAPLES Center in Los Angeles, California this evening for this week’s episode of WWE RAW on the USA Network.

Baron Corbin gets to select the special guest official for his Universal Championship Match on Sunday against Seth Rollins at WWE Stomping Grounds, and he’ll reveal that decision live on Raw. What will he announce on Raw in Los Angeles, six nights before that anticipated title bout against The Beastslayer? Plus, Braun Strowman, Ricochet, The Miz, Bobby Lashley and Cesaro clash in a Fatal 5-Way Match for the right to challenge Samoa Joe for the United States Championship at WWE Stomping Grounds and Daniel Bryan joins the red brand for the night as a Wild Card!

Who will don the stripes for Rollins vs. Corbin at WWE Stomping Grounds?

Universal Champion Seth Rollins stood tall last Monday night on Raw after obliterating the main event’s special outside guest official, Sami Zayn, with a steel chair. However, The Beastslayer might not look so triumphant when the dust settles at WWE Stomping Grounds, where he will defend his title against Baron Corbin. Throwing a wrench into the works, The Lone Wolf will choose the Special Guest Referee for his own title opportunity and will reveal his decision on Raw.

Corbin has yet to make his decision, leaving the WWE Universe and The Architect pondering exactly how he’ll tip the scales in his favor. Will Corbin choose Zayn to call the match “down the middle,” based on his work as the outside official this past Monday night, or might Corbin select Rollins’ Raw opponent Kevin Owens, who has also spoken favorably of the former Acting Raw General Manager? Or perhaps Corbin will extend an invitation to “Mr. Money in the Bank” Brock Lesnar to purvey some up-close-and-personal paranoia at WWE Stomping Grounds?

Whatever Corbin announces, you won’t want to miss the fallout.

One week after Braun Strowman, Ricochet, Cesaro and Bobby Lashley crashed “Miz TV” to state why they each deserved an opportunity to challenge Samoa Joe for his United States Championship, the four interrupting Superstars, along with The A-Lister himself, will compete in a Fatal 5-Way Match to determine who will challenge The Samoan Submission Machine for his star-spangled title at WWE Stomping Grounds.

Which of these five determined competitors will square off with Joe for the prestigious U.S. Title next Sunday? We’ll find out on Raw.

Daniel Bryan is a Wild Card

SmackDown Tag Team Champion and “Planet’s Champion” Daniel Bryan has been chosen to be one of the four Wild Card Superstars to appear on Raw this coming Monday in Los Angeles.

The former SmackDown General Manager has long been loyal to the blue brand, and since this Wild Card appearance is not by choice, one can only wonder what Bryan will have to say to the “fickle” WWE Universe on Raw.

Well, it seemed like a good idea at the time.

To help 24/7 Champion R-Truth evade his omnipresent pursuers during SmackDown LIVE, Carmella helped her pal hide in an open road case. Unfortunately, he was locked inside when it was shut, and The Princess of Staten Island had to rush out to the ring for her match against Sonya Deville. Despite Jinder Mahal’s best efforts to pry the case open, Truth was ultimately packed up with the rest of the production equipment and shipped off to Raw in Los Angeles.

Without a doubt, when Truth is free of his prolonged (and, at the moment, mobile) hiding spot at Raw, a small army of challengers will be waiting for him.

By defeating Raw Tag Team Champions Zack Ryder & Curt Hawkins and The Usos in a Triple Threat Tag Team Match this past Monday night, The Revival kicked off their second reign with the red brand’s tandem titles.

Following their victory, Scott Dawson & Dash Wilder were congratulated by Shane McMahon, who then welcomed the new champions to an invite-only celebration worthy of “The Best in the World.” How will The Revival keep the party – and the victories – rolling in Los Angeles?

Could a Woman’s Right bring us “Becky No Belts”?

Raw Women’s Champion Becky Lynch teamed with Bayley against Lacey Evans and Alexa Bliss this past Monday night, and although The Huggable One absorbed the Woman’s Right that concluded the match in favor of The Lady of WWE and The Goddess, the hard-hitting strike also felled The Man at ringside during the bout.

How will Lynch respond to that Woman’s Right – and that defeat – on Raw, six nights before she defends her Raw Women’s Title against Evans at WWE Stomping Grounds?

Tune in to the action on Monday Night Raw, live at 8/7 C on USA Network!